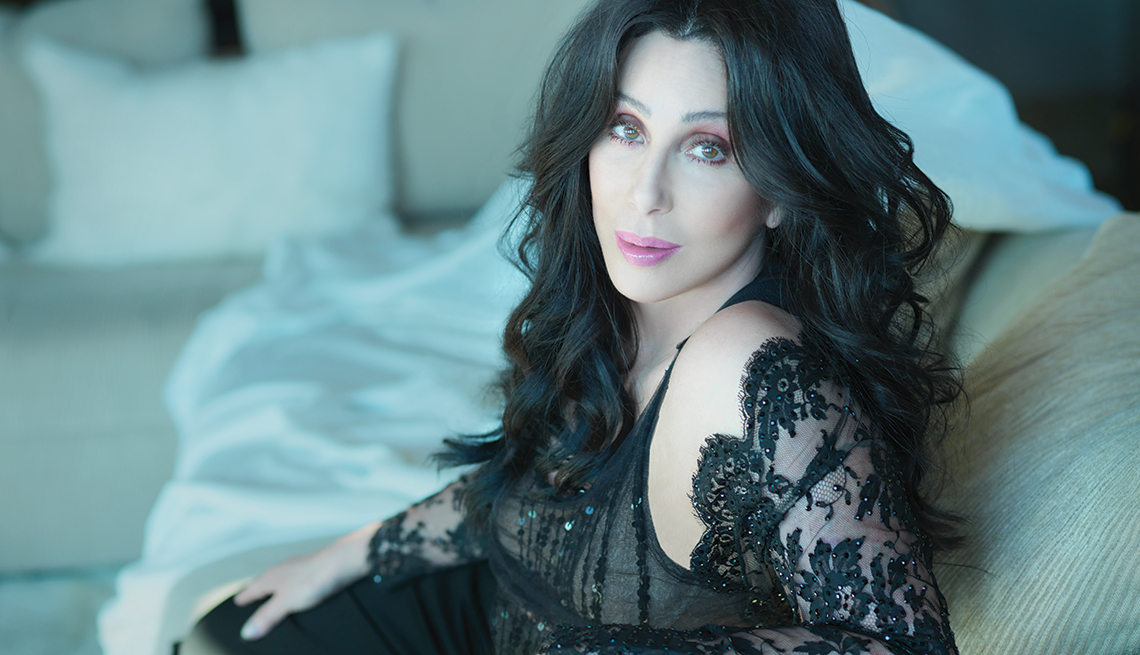 Late at night, she gets social, holed up in the bedroom of her eye-popping Moorish-castle-meets-Venetian-palazzo high on a bluff in Malibu. Stretched out on a bed that once belonged to the wife of Rudolph Valentino, Cher turns to Twitter to share what's on her mind. Nothing seems off-limits. (An example: "How did you celebrate Madonna's birthday?" someone asks. Cher's answer: "I got a colonic.")

Late at night, she also chats by phone with reporters. "I'm eating while talking to you," she says in that famous throaty contralto that long ago made her the Goddess of Pop. A giggle. "Peanut butter. Crunchy, of course!"

Cher's unabashedly frank attitude endears her to millions of fans. She's as witty as she is physical — and always, always sexy. An intriguing blend of Armenian-American and Cherokee, she's also extremely adept at staying in the game. Her reign as an undisputed diva is among the longest in show business. Now 68, she was just 19 when she hit the national stage with then-husband Sonny Bono. She has won a best-actress Oscar, an Emmy, three Golden Globes and a Grammy. And she has scored a No. 1 record in each of the past six decades. Her 26th studio album, Closer to the Truth, released last fall, was her first in more than 11 years and entered the Billboard 200 chart at No. 3, making it her highest-charting album ever. As she rightfully boasts, "I'm so the phoenix."

Though she swore that her 2002 Living Proof: The Farewell Tour would be her last, she's back with her Dressed to Kill Tour, with headdresses as tall as buildings and elaborate costumes that cast her as a Greek gladiator, a gypsy queen and a Byzantine divine being. She attributes her success to her perfectionism. "I'm not a confident person," she says, "and I'm really not a Cher fan. But I want to make sure I'll do a great job, so I go balls to the wall and try to do every single thing I can."

Says Stanley Tucci, a costar of her 2010 film Burlesque, "The most remarkable thing about Cher is that she constantly reinvents herself but maintains a strong sense of identity."

She's been her own person almost since her birth as Cherilyn Sarkisian, in El Centro, Calif., the daughter of a truck driver with a drug habit and a struggling actress-model-singer. Cher's parents divorced before she was a toddler, and her mother, Georgia Holt, briefly placed her child in an orphanage. Holt remarried several times and produced another daughter, Georganne; stepfathers were rarely in the picture, and Cher routinely flirted with trouble. "When I was a kid, my friend and I ran away and hopped a train," she says. "I was always this strange child who wanted more adventure than was allowed. I think I learned a lot from my mother," Cher adds. "She really didn't take s--- from anybody."

Yet the two often butted heads. Holt was fine with Cher's dating Warren Beatty at age 16, but hit the ceiling when her daughter dropped out of high school and moved in with Bono, a married songwriter and record promoter 11 years her senior. Says Cher, "She kept going, 'Why are you going to throw your life away on him? You have so much potential, and you're so special.' "

But Bono saw Cher's talent and focused her "scattered energy," she says. They married in 1964. The duo's infectious pop hits cut across all strata, and they captured 30 million weekly viewers with The Sonny & Cher Comedy Hour. But the marriage came unwound in 1972, largely, according to Cher, because she grew up, literally: "He didn't like me older, and I mean, like, 25." He cheated on her, and when they dissolved their business partnership, he sued her. Still, she forgave him, she says, "because we had a relationship that defied all kinds of things."

When Bono died in a skiing accident in 1998, it was their daughter, Chastity, who informed Cher, out of the country, via telephone. "I have never heard my mom as devastated by anything," says Chaz, 45, as he is now known. "Their core bond and that first-love thing just kicked in for her."

Even today, Cher sometimes feels Sonny around her: "I have this fabulous chandelier in my sitting room, and it goes off and on all the time for no reason. I always think it's him messing with me, because that is what he would do."

Chastity had come out to her parents as a lesbian before Sonny's death, and Cher did not take it well at first — though she has long been revered as an icon in the gay community. She eventually found acceptance, even after Chastity underwent gender-reassignment surgery, a process finalized in 2010. Cher remembers, however, the sadness she felt one day when she phoned Chaz. "He'd forgotten to erase his old outgoing message," she says. "I thought, 'I'm never going to hear my daughter's voice [in person] again.' " Today, Cher advises parents with children wrestling with sexual identity to "have faith and hold on. It's scary because you don't know how you're going to feel."

She refuses to comment on her relationship with Elijah Blue, 38, her musician son from her marriage to rocker Gregg Allman in the '70s, but the two are reportedly estranged. Yet, Cher notes, she and Allman have stayed in touch. In fact, she says she has remained friends with almost all her old beaux. She now dates occasionally but keeps it quiet because "being Mr. Cher" is hard on a man's ego. In answer to why she often dates younger men, she says, "Older men rarely liked me. If it wasn't for younger men, I would never have a date."

She concedes that she isn't always easy to be around. "Depression just gallops through our family," she says. Eating right and exercise give her stamina, but, she adds, "Every once in a while I think, 'Jesus, you're so old! How did this happen?' I haven't looked in the mirror in years. The only time I was happy with the way I looked was when I was, like, 40 to 45."

Yet she pushes past her insecurities because she is still full of creative ideas. There's a play about her in development, in which she just might take a turn as herself. "I'm also writing this thing that starts with my grandmother's life," she says, "and ends with my mother getting off the table, because she was going to get an abortion with me." Her voice leaps with excitement. "It should be a film!

"Diane Warren wrote 'You Haven't Seen the Last of Me' for Burlesque," Cher continues, "and that's the closest to who I am. I don't intend to step aside. This is the first generation that's said, 'We're not going to roll over and play dead because we're a certain age.' It's like saying to the Rolling Stones, 'OK, you've had your time in the sun. Now go put on some plaid shorts and play golf.' " A beat. And then hysterical laughter.

The old joke has it that when a nuclear holocaust destroys the world, the only things to endure will be cockroaches and Cher. She's stopped asking herself why she's such a survivor, but she knows she is. And we do, too.