Robert Washington struts onto the stage wearing a big smile and black leather in 90-degree heat. He gyrates and gestures wildly to "Polk Salad Annie" and then croons "Love Me Tender" — just like many of the tribute artists channeling the King of Rock 'n' Roll at the Michigan Elvisfest in Ypsilanti, a weekend of concerts that draws Elvis enthusiasts. 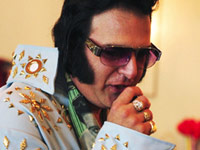 Washington kisses a few women in the audience, after singing with gusto and dancing with an energy that belies his 52 years. "I'm barely sweating and I plan on doing something about that," he tells the crowd.

Most Elvis artists are barely half his age, yet sometimes after a performance they ask, "'How can you do that? You're in your 50s,' " Washington says. "I give the young kids a run for their money." He proudly says that he's won two Elvis competitions in the last year, and has been singing Elvis Presley's songs for 24 years — nearly as long as the King himself, who would have celebrated his 76th birthday on Jan. 8. Presley died in August 1977 at age 42.

Not easy being Elvis

Washington, of Auburn, Maine, ranks among a small number of professional Elvis artists who are over 50 yet are still singing favorites such as "Burning Love" and "Blue Suede Shoes." They perform at conventions and birthday parties, local bars and Elvis festivals and competitions coast to coast. A few will show up at the Elvis birthday celebrations this month in Seattle and Memphis.

Doug Church, 48, knows plenty of his peers who have retired — or "hung up their jumpsuits," as he calls it. But Church hopes to continue as an Elvis tribute artist, or ETA, for another five or 10 years. He heads to the gym regularly and, at his wife's urging, uses skin moisturizer to remain youthful-looking.

"I keep my energy level up" and the waistline down, says Church, who lives in Mishawaka, Ind., near South Bend.

The work can be demanding. Douglas Olvey, 43, a part-time Elvis from Euless, Texas, feels it in his elbows and knees after performing his Elvis moves. "Once in a while I wake up [the next day] and feel like I've been in a football game," says Olvey, who also works as a wedding DJ.

Many Elvis artists use hair dye or wigs, makeup and body shapers to help them look like the King. One applies mascara to cover the gray that pops up between hair appointments. Elvis impersonators also need "a certain amount of sexual charisma," says photographer Patty Carroll, who snapped 75 of them for the book Living the Life: The World of Elvis Tribute Artists.

"The guys who outgrew the early Elvis look did the '70s Vegas look," says Carroll. "The amazing thing about Elvis is that although he died when he was 42, he looked older. But a tribute artist who is much older might actually look better than Elvis."

Washington, who is African American, favors Elvis from 1970, singing ballads such as "The Wonder of You" and wearing fringe, not rhinestone-studded jumpsuits. But even he admits that artists must be versatile. "You can't be stuck in one era of Elvis," Washington says.

However, age may be a factor when it comes to Elvis competitions. Washington says some contest judges prefer younger performers — those who look like Elvis circa 1957. One of the biggest competitions, the Ultimate Elvis Tribute Artist, staged for five years by Elvis Presley Enterprises, has never had a contestant "close to 50 years old. We don't have restrictions, but that is the way it has worked out," says spokesman David Beckwith.

One possible reason: Fans and shows favor the 23-year-old performers. "The younger guys do charm the ladies more," Carroll says.

Church has performed as an Elvis tribute artist since 1983, when an Air Force buddy dared him to enter a talent competition. "I won the contest," he says, and he's been dancing and singing ever since. This month, he'll head to Finland and perform in a casino for two months.

To combat burnout after almost 30 years of Elvis songs, Church has recorded cover tunes from other artists in Elvis' style and mixed in lesser-known songs from the 720 that the King recorded. He works just about every weekend at parties, theaters and nightclubs.

"It's very, very competitive," he says, estimating that there are 50 or so Elvis performers in Vegas. Among them are seven or eight — including Powers — who earn a full-time living from it. Fees for Elvis performers range from $100 to $5,000 or more per show.

When he first started, Powers drummed up work by mailing promotional packages, one by one, to potential clients, and lined up a band to back him. Now he uses a website to entice clients and a CD of recorded music during his performances.

"I love Elvis and I love to entertain," Powers says. "The audience doesn't know you've been doing it for 25 years."

Vickie Elmer is a writer in Ypsilanti, Mich.