What You Need to Know About ‘Titanic’ on Its 25th Anniversary

Read the inside stories about the triumphant disaster movie 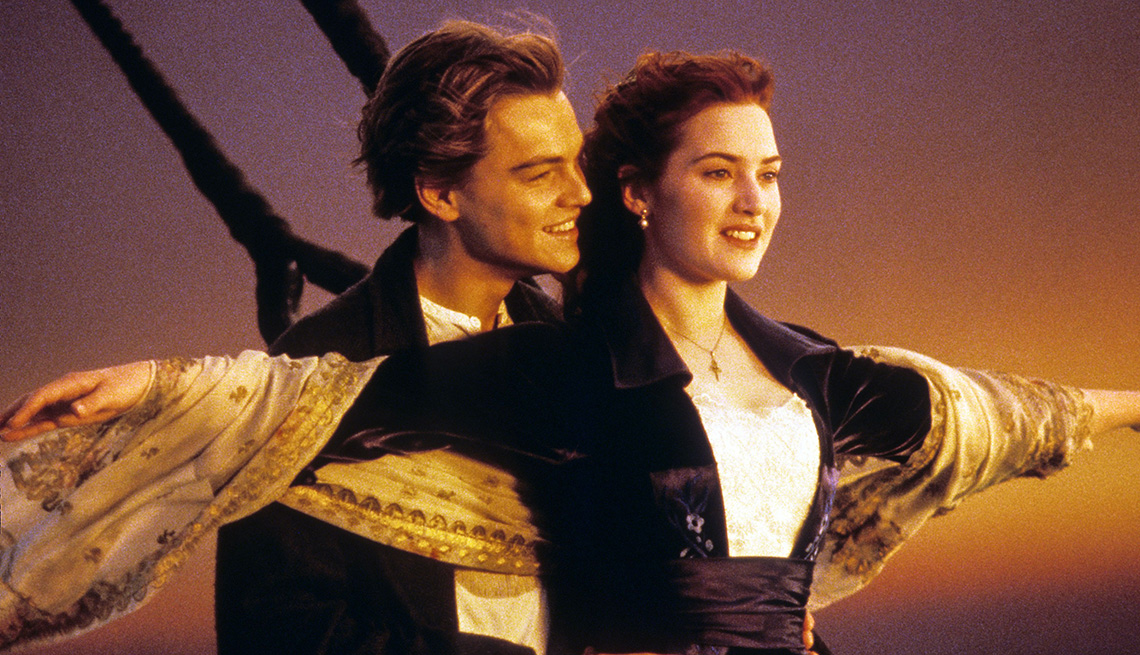 When director James Cameron’s Titanic hit theaters Dec. 19, 1997, experts were sure it was a disaster that cost $200 million. But it earned $2.2 billion and became a beloved classic that will be back in theaters the week of Valentine’s Day, on Feb. 10, 2023, in a remastered 3D 4K HDR (i.e., very good-looking) version. The also gorgeous current version, remastered in 2017, is well worth streaming on the 25th anniversary of that historic day when we all first felt like the king of the world.

Here are some fun facts about the movie Cameron originally pitched as “Romeo and Juliet on a boat”:

Instead of Kate Winslet, Claire Danes was supposed to play Rose, opposite her Romeo+Juliet costar Leonardo DiCaprio. “I had just made this romantic epic [Romeo+Juliet] with Leo in Mexico City,” Danes told podcaster Dax Shepard, “which is where they were going to shoot Titanic! And I just didn't have it in me!” She has “zero regrets.”

Then Gwyneth Paltrow spurned the Rose role, which she regrets. Other potential Roses: Winona Ryder, Uma Thurman and Reese Witherspoon. Winslet says they were much more likely candidates, and she got lucky.

DiCaprio wasn’t the only potential Jack

After River Phoenix died, Jared Leto refused to audition. Matthew McConaughey failed an audition he told People he thought he’d aced: “They were like, ‘That went great.’ I mean, kind of, like, hugs. I really thought it was going to happen.” Johnny Depp declined to play Jack because he hated the script. “Horrible, I couldn’t get through it,” he told Howard Stern. DiCaprio was offered the Titanic lead, but he almost chose Boogie Nights instead. Happily, he chose Titanic (recommending his Basketball Diaries costar Mark Wahlberg for Boogie Nights) and wound up enjoying his favorite onscreen smooch of all time with Winslet. He told Oprah they didn’t kiss just once on Titanic, but “more times than you could ever imagine.”

Other A-listers missed the boat

Robert De Niro got a gastrointestinal bug, so Bernard Hill played the captain of the doomed ship instead. Reba McEntire had to let Kathy Bates take the Molly Brown part, because the shoot lasted too long and she didn’t want to cancel her tour and have to fire her crew. 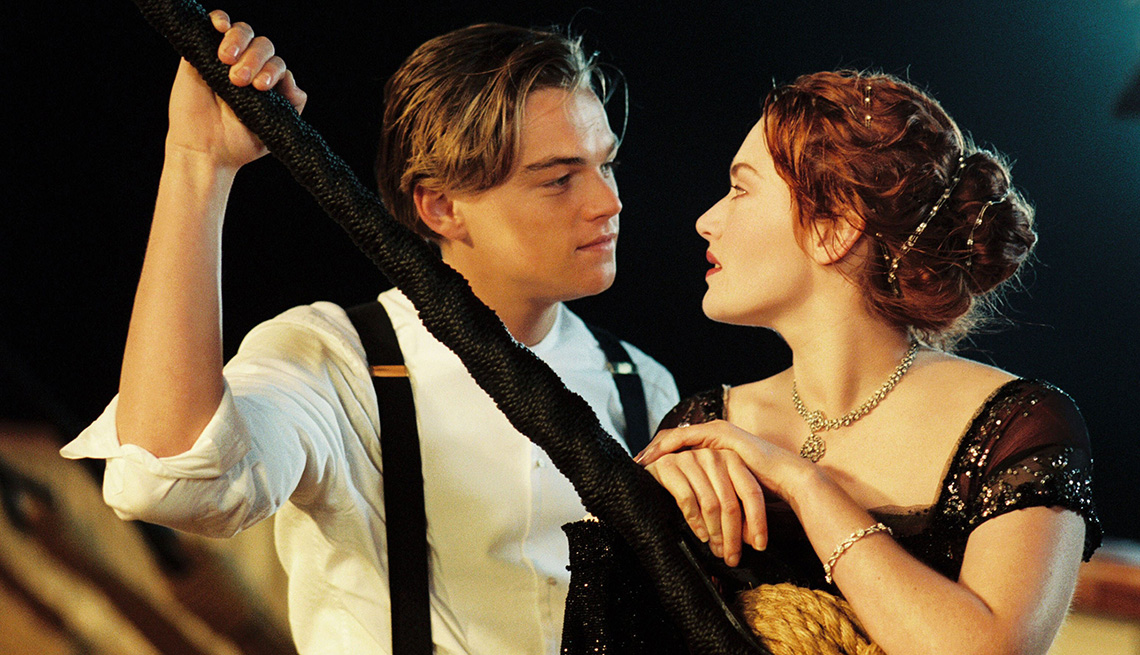 “He’s a bit gorgeous, and I was worried that I was going to be bowled over by him, or that he was going to find me all stuffy and Shakespearean and English,” Winslet told Rolling Stone. So before their first scene — in which he sketches her naked — she flashed him. “Luckily, and this is the important thing, we never fancied each other. I know that’s annoying to hear. Sorry.” They’re pals for life and quote Titanic lines to each other for fun.

Winslet got fat-shamed without actually being fat

In childhood, her drama teacher said she’d have to settle for “fat girl parts,” and her nickname was "Blubber," she told children at a 2017 British youth charity event, and on Titanic, Cameron called her “Kate Weighs-a-Lot.” Some trolls said that’s why Leo couldn’t fit on the raft at the end. “They were so mean,” she told podcaster Josh Horowitz. “I wasn’t even f------ fat.” She wishes she’d told the trolls, “Don’t you dare treat me like this. I’m a young woman, my body is changing, I’m figuring it out, I’m deeply insecure, I’m terrified, don’t make this any harder than it already is.” 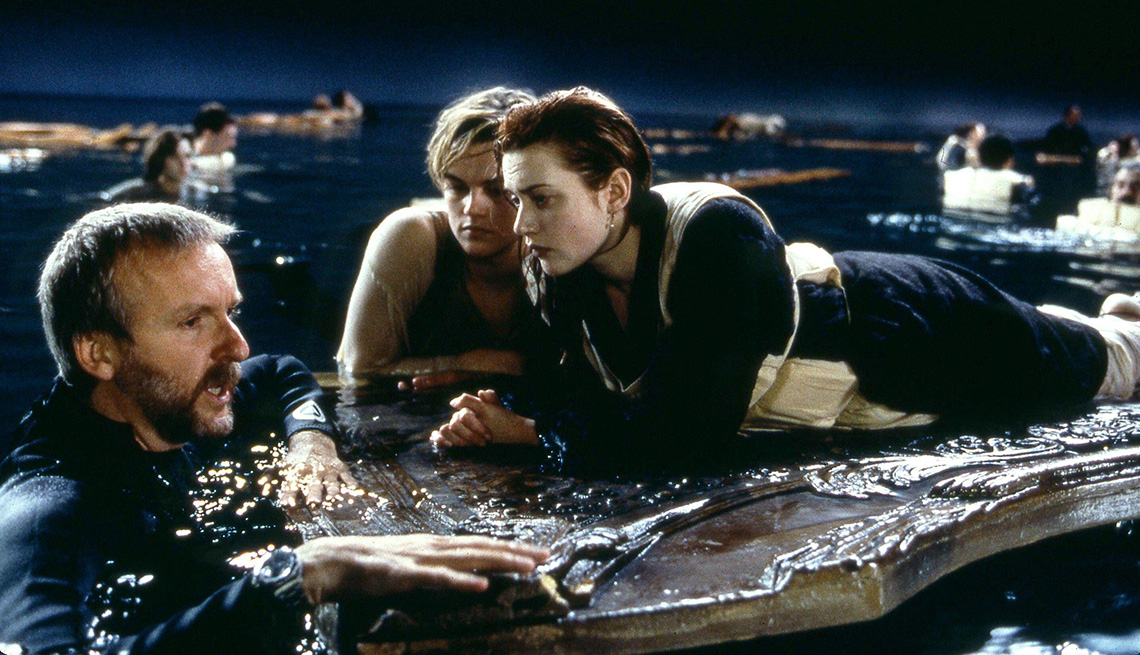 But … could Jack have fit on the door-turned-raft with Rose and lived?

To prove that Jack and Rose couldn’t have survived on the raft, Cameron put stuntpeople the same weight as the stars on a Titanic raft replica in ice water and had a hypothermia expert examine them. In February 2023, he’ll release a special on the study.

MythBusters did a 2012 Titanic experiment and concluded that the lovers could’ve survived if they put Rose’s life jacket under the raft for buoyancy, Rose could’ve survived alone on it, and Jack would’ve died in 51 minutes in the water. Cameron told the MythBusters hosts, “Could Romeo have been smart and not taken the poison? Yes. It sort of misses the point.”

What does Winslet think?

At a press event for the 2022 James Cameron blockbuster Avatar: The Way of Water, Winslet (an experienced swimmer) said, “If you put two adults on a standard paddleboard, it becomes immediately extremely unstable. I actually don’t believe that we would’ve survived if we had gotten on that board. I think that he would’ve fit.

“So you heard it here for the first time: Yes, he could have fit on that door, but it would not have stayed afloat.”

She told Oprah that as they bobbed on the raft in water so cold it gave Winslet hypothermia, she whispered to him, “Leo, it’s my birthday today.” He replied, “Sweetie, I really don’t care.”

But Cameron did — his original sketch of her sold for $16,000. “People ask me to sign that a lot,” Winslet told Yahoo! Movies. She always says no and notes that Cameron actually sketched her in a bathing suit.

Winslet says that it wasn’t in the script and that she and DiCaprio invented it.

Was Jack’s line “I’m the king of the world!” in the script?

No. Cameron told the BBC he came up with the line on the day of shooting while in a crane high above DiCaprio on the ship’s prow. He shouted, “Spread your arms out wide and just be in the moment and just love it.” Puzzled, DiCaprio said, “What?” But he nailed the line.

While shooting the sinking scenes, she had the inspired idea to have Rose notice where they were on the deck and say to Jack, “This is where we first met.” 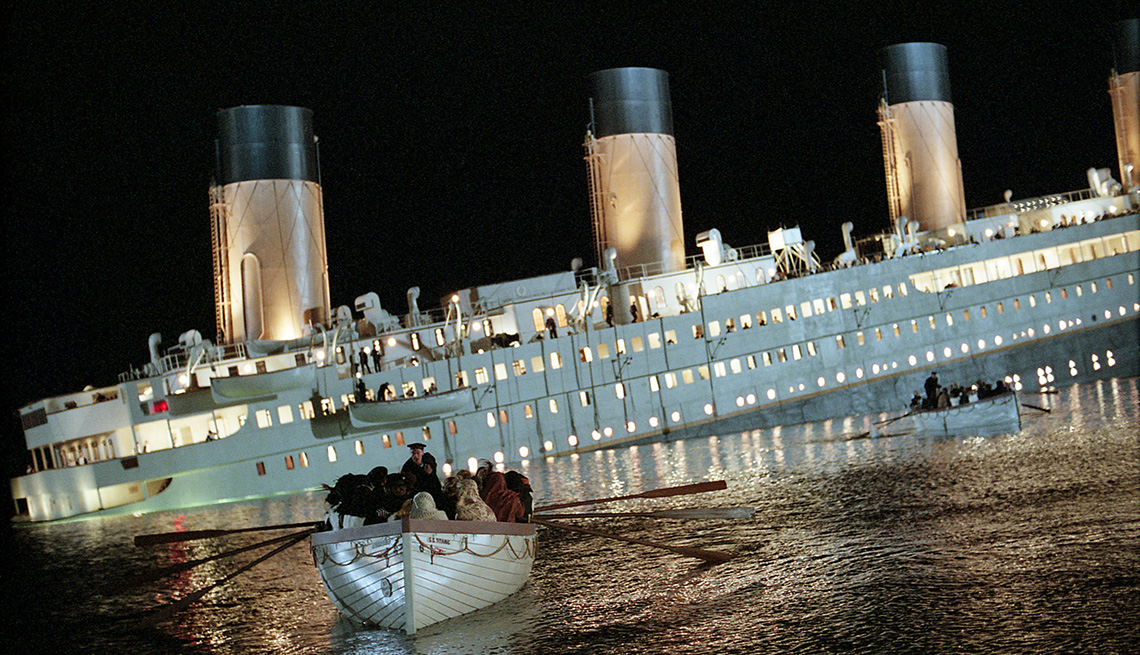 The Titanic set had lots of offscreen drama

The shooting days were often 14 hours long, and Cameron screamed so much the crew dubbed his bad-mood persona as “Mij” (Jim backward). Eating real caviar for take after take in the scene where low-born Jack must learn which fork to use while dining with Rose’s snobbish family, DiCaprio looked at the authentic 1912-style White Star Line silverware, according to Vanity Fair, and asked, “Which one of these do I use to lobotomize myself?”

Other times, he was gaily singing like Ethel Merman or nursing his pet lizard Blizzard back to health after a truck ran him over or exultantly learning to polka with Winslet for the rollicking dance scene with the lower-class passengers or getting booted from a bar with his pals for “dancing inappropriately.”

And it had its own real-life disasters

Winslet chipped an elbow bone, and when her coat caught on a prop while underwater, she thought she’d drown. Then Cameron made her do the scene again. In Avatar: The Way of Water, she did an underwater scene holding her breath for seven minutes, 14 seconds, allegedly breaking Tom Cruise’s breath-holding record in Mission: Impossible – Rogue Nation.

Someone poisoned the crew’s food with PCP — “angel dust”

“So all of a sudden, here’s 150 crew members stumbling into the emergency room of a very small hospital at 1 in the morning,” cast member Bill Paxton told Larry King. “Some people are freaking out, some people are conga dancing, some people are euphoric. I knew I was pretty stoned on something pretty bad. We thought the clams had been left out in the sun or whatever. I said to Jim, ‘This is bedlam, I’m gonna wander back down and just drink a case of beer.’ That seemed to help me.”

One crew member stabbed Cameron in the face with a pen; he bled and laughed.

Speaking of bodily fluids, you wouldn’t have wanted to swim too close to the movie stars in the sinking scenes.

“Yes, I admit to sometimes peeing in that water,” Winslet told Rolling Stone. “You didn’t want to have to get out and go to the bathroom, which would take half an hour with corsets and dresses and all that sort of thing.”

Titanic caused tears for the performers as well as audiences

Winslet burst into tears reading the script, cried for an hour after filming emotional scenes, and again last year when she reunited with DiCaprio. Frances Fisher, who played her haughty mom — and now Winslet is 47, two years older than Fisher was in 1997  — cried her eyes out at the film’s end when Titanic premiered at London’s Royal Albert Hall. She told Vulture that her makeup ran, so she asked the guy seated next to her, Prince Charles, “Your Royal Highness, do you mind if I borrow the doily on your chair to wipe my tears?” He gave it to her, saying, “It’s a marathon, darling.” Fisher kept the doily and her costume’s uncomfortable corset and plates, silverware and a tablecloth from the Titanic dining room.

He told the Toronto Star, “It’s like Romeo and Juliet. It’s a movie about love and sacrifice and mortality. The love is measured by the sacrifice. … Maybe after 25 years, I won’t have to deal with this anymore.”

‘Avatar: The Way of Water’ Review

The action epic may have a simplistic story, but it’s a lock for a visual effects Oscar nomination

The Best Onscreen Couples of All Time

​From Tracy and Hepburn to Lathan and Epps, watch the 15 dreamiest pairs to light up the silver screen 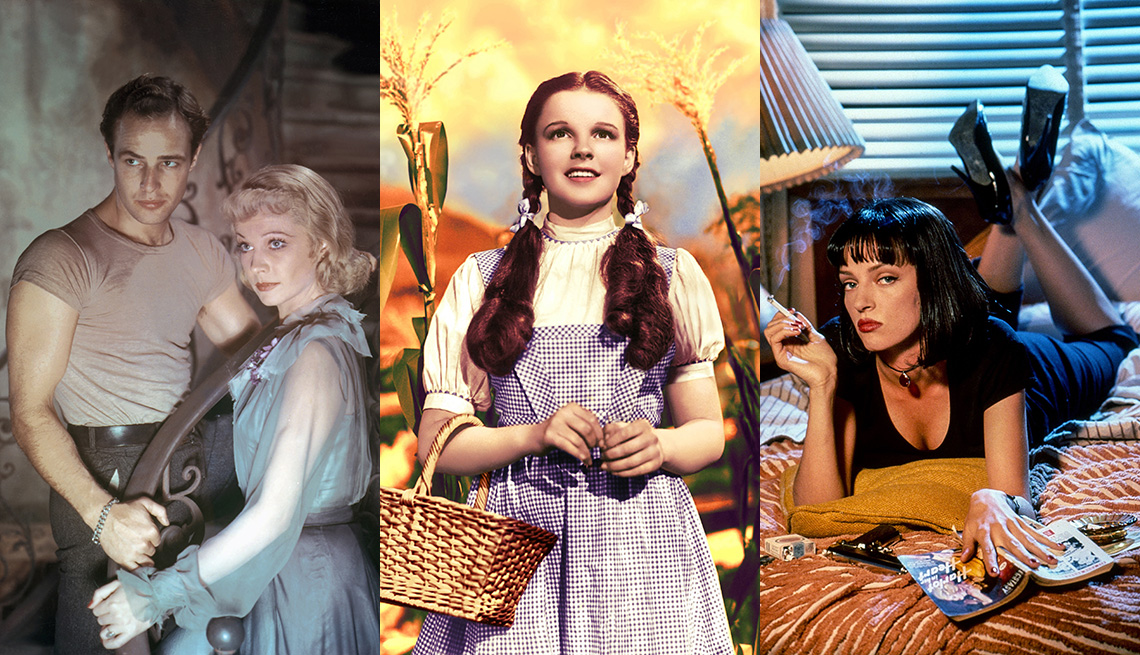 The 30 Movies Every Grownup Should Know