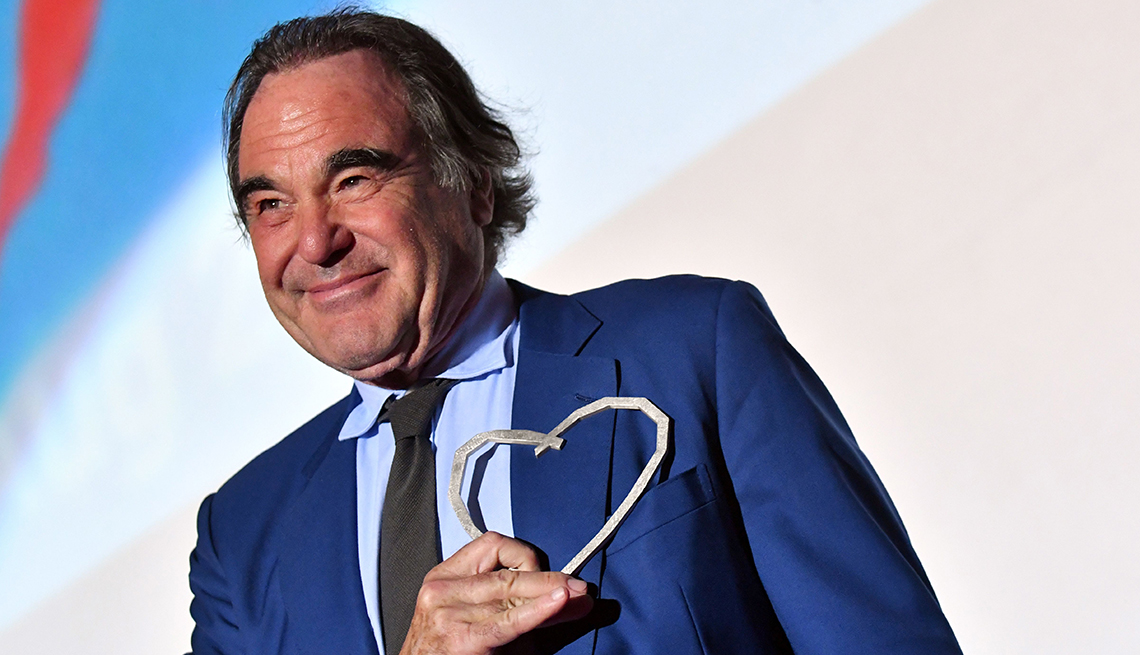 Oliver Stone poses with a "Heart of Sarajevo" award for his lifelong contribution to the art of film during the award ceremony at the 23rd Sarajevo Film Festival.

En español | Senseless violence. Bottomless conspiracies. Val Kilmer in leather pants. Oliver Stone's movies have been making waves — and winning awards — for the better part of 40 years. So, with the 73-year-old filmmaker now publishing his first memoir — Chasing the Light: Writing, Directing and Surviving Platoon, Midnight Express, Scarface, Salvador, and the Movie Game — AARP figured it was time for a refresher course on why so many critics consider Stone to be one of America's greatest (certainly one of its most controversial) living auteurs.

Below are 10 of Stone's classic cinematic achievements, in descending order of re-watchability. (Note: the CIA, the FBI and Lyndon Johnson were in no way involved in the following rankings).

RELATED: The director dishes his dysfunctional family life with AARP in this interview.

Sex, drugs and rock ‘n’ roll were never more depressing than in this humorless dirge following the short, not-so-happy life of ‘60s icon Jim Morrison, who died in 1971 at age 27 after years of boozing and narcotics abuse. But the film does have one thing going for it: Val Kilmer's dazzling, over-the-top performance as the doomed rock messiah. The concert scenes are exhilarating — Kilmer (now 60) performed many of his own vocals, miraculously channeling Morrison's cadence and timbre, and at one point during filming he actually broke an arm jumping from the stage into the crowd — even if the rest of the movie is kind of a downer.

Stone and Al Pacino had known each other for years — since Stone wrote the screenplay for 1983's Scarface — but it wasn't until this gladiatorial drama about the NFL that they finally got to work together. Still, the breakout performance here belongs to Jamie Foxx (now 52), who plays a hotshot quarterback who clashes with Pacino's aging, out-of-step coach. (Foxx can thank Sean “Diddy” Combs for the role; the rapper was originally cast but reportedly couldn't throw a football well.) Reviews were decidedly mixed — “quintessentially zany Oliver Stone,” is how the New York Times described it — but with a running time of two hours and 40 minutes, this movie is definitely more of a marathon than a scrimmage.

Stone didn't just court controversy with this real-time biopic of George W. Bush — shot quickly and rushed into release while the 43rd president was still occupying the Oval Office — he grabbed controversy by the lapels and gave it a big wet smooch. The shelf life of a gimmicky campaign season stunt like this isn't long (it pretty much expired on Jan. 20, 2009, when Bush handed the White House keys to Barack Obama), but there are still elements worth rewatching, especially Josh Brolin's shockingly spot-on performance as the title character. Brolin (now 52) not only nails Dubya's voice and posture, he captures the very essence of Bush, with every shoulder shrug and heh-heh chuckle. Richard Dreyfuss as Dick Cheney isn't half bad either.

You can see Quentin Tarantino's fingerprints all over this manic tale about two homicidal lovers — played by Woody Harrelson (59 on July 23) and Juliette Lewis — tearing across the country on a psychedelic killing spree. But Stone rewrote so much of Tarantino's original script, the future Pulp Fiction director disowned the picture (he gets only a “Story By” line in the credits) and later went so far as to warn away potential viewers. ("I hated that f-----g movie. If you like my stuff, don't watch that movie.") He wasn't the only one who had a strong negative reaction. The movie's gleeful blood splattering also left a big chunk of the audience cold, and it ended up grossing just $50 million. Still, lots of critics swooned over its masterful mashing of genres, with Entertainment Weekly declaring it the “art of depraved catharsis." 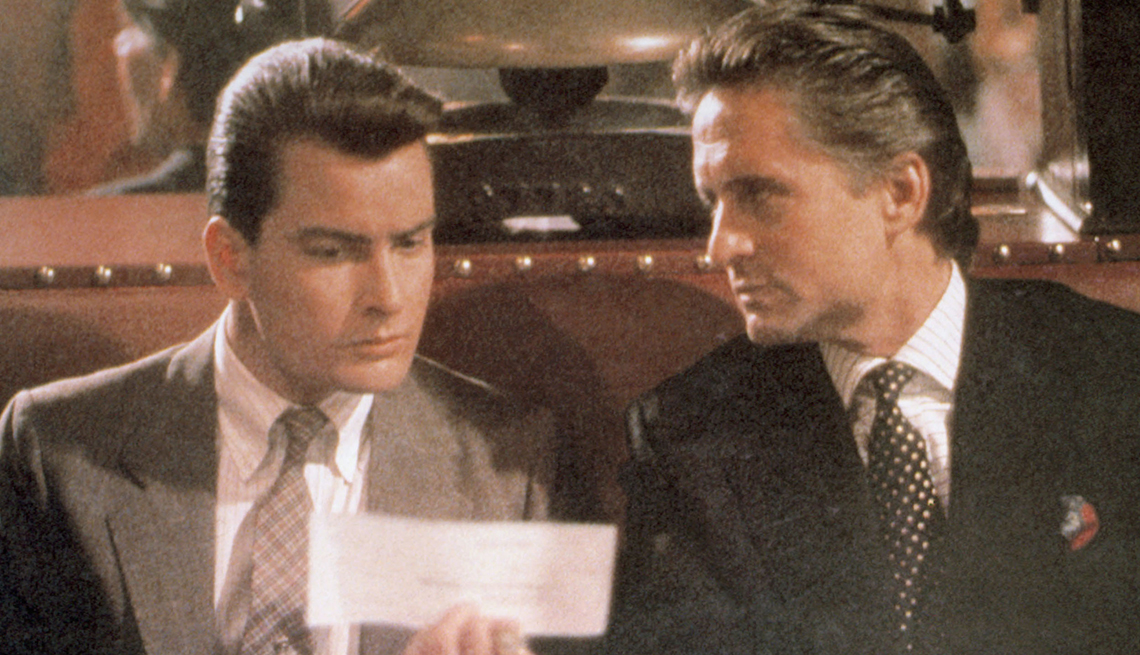 "Greed is good,” proclaims Michael Douglas’ Gordon Gekko, delivering one of the 1980s most quoted movie lines in the film that all but defined that decade's excesses. As it happens, though, this slick stock market drama was originally inspired by a much less ruthless trader: the director's father, Lou Stone, who spent his life toiling on Wall Street. The film was also originally going to star Tom Cruise, then Michael J. Fox, and then Matthew Broderick, before Charlie Sheen, stepped into the part of the young broker, Bud Fox, who gets caught in Gekko's web of financial malfeasance. Despite some cringey moments — Sheen peering into the skyline from his high-rise balcony, pondering aloud, “Who am I?” — the movie is still pretty watchable, if mostly for Douglas’ oily charm. Douglas, (now 75) won his first and only acting Oscar for the part.)

James Woods landed an Oscar nomination for his portrayal of a down-on-his-luck American news photographer who gets tangled up in the Salvadoran civil war — but the actor (now 73) behaved so badly on the film's Mexican set that he almost scuttled the project. Writes Stone in his memoir: “Jimmy had been yelling so much in front of the Mexican crew that he was suddenly and officially warned by the Mexican government that his behavior ‘as a guest in our country’ was ‘unacceptable,’ and that if it continued, he'd be asked to leave Mexico.” Still, giving credit where credit's due, it's a remarkable performance from a “master of nervous paranoia” (as Roger Ebert described Woods in his rave review). And the film itself still holds up as a tautly written and directed character study.

Tom Hanks, Jack Nicholson, John Malkovich, Gene Hackman, Tommy Lee Jones and even Robin Williams were all reportedly considered for the title role. But ultimately, Welshman Anthony Hopkins ended up playing Tricky Dick in this sweeping biopic about the 37th president. The unconventional casting decision had even some of Hopkins’ castmates scratching their heads. Paul Sorvino (now 81), who played Henry Kissinger, went so far as to offer Hopkins (now 82) unsolicited acting advice on how to pull off Nixon's unique speech patterns. Hopkins was so alarmed by all the controversy that he briefly quit the film — until Stone coaxed him back — then turned in one of the boldest (and, oddly, most moving) performances of his later career, garnering rave reviews as well as an Oscar nomination. 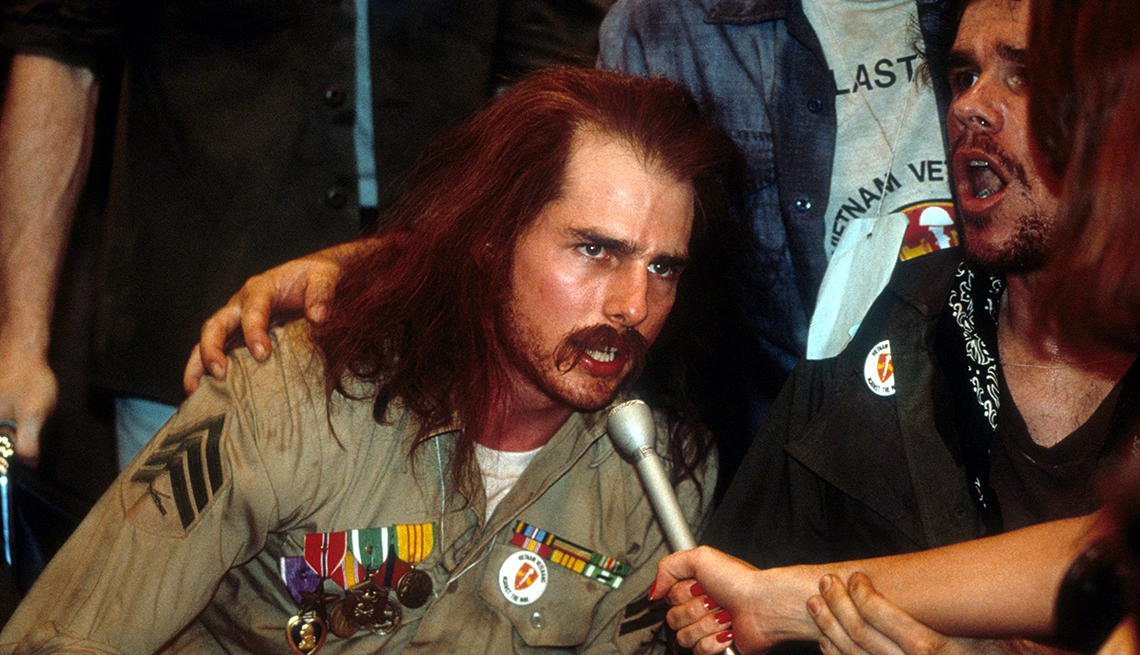 Tom Cruise as Ron Kovic in "Born on the Fourth of July."

It took Stone nearly 10 years to finagle a green light for this biopic based on the memoir of paralyzed anti-Vietnam War activist Ron Kovic. He purchased the screen rights way back in 1978, but it wasn't until Platoon blew up at the box office in 1986 that Universal finally agreed to produce it. In an earlier incarnation, Al Pacino was supposed to play Kovic, but by the time Stone got around to shooting, Pacino had moved on — which is how Tom Cruise ultimately ended up in the wheelchair (despite studio nervousness about Cruise taking on such a dramatic role). The picture ended up winning Stone his second directing Oscar and landed Cruise (now 58) his first nomination. (Cruise lost to Daniel Day-Lewis for My Left Foot.)

RELATED: How did Tom Cruise's performance in Born on the Fourth of July rank in our critics’ rankings of the actor's 10 best movies? Find out here: The Best Tom Cruise Movies of All Time, Ranked

Even as it was still filming, Stone's incendiary docudrama about the Kennedy assassination had newspapers across the country running editorials blasting the director for peddling conspiracy theories (specifically, pinning the president's murder on a shadowy right-wing cabal that included the CIA, the FBI and even vice president Lyndon Johnson). “A man of technical skill, scant education and negligible conscience,” is how George Will dissed Stone in the Washington Post. Still, whoever really killed Kennedy, there's no denying JFK is mesmerizing filmmaking that sucks the viewer into that tragic day in Dallas as if we were all extras in the Zapruder film. There weren't many Oscar nominations — none for Stone or Kevin Costner (now 65), who played New Orleans district attorney and chief conspiracy theorist Jim Garrison — but Stone did snag a Golden Globe for best director.

Lots of cinematic geniuses have tried to tackle the Vietnam War — Francis Ford Coppola with Apocalypse Now, Stanley Kubrick with Full Metal Jacket — but it took an actual Vietnam veteran (Stone enlisted when he was 21) to truly capture its grim horror on the screen. Stone originally courted Keanu Reeves for the part Charlie Sheen (now 54) would end up playing — Chris Taylor, a young GI mired in the jungle near the Cambodia border — but the future Matrix star turned it down because he objected to the violence in the script. Still, Stone's grunt's-eye view of the conflict wowed critics (the New York Times declared the movie a “singular achievement"), won a shelf full of Oscars (including best picture and best director) and remains today the definitive movie about that sad, bloody chapter in American history.