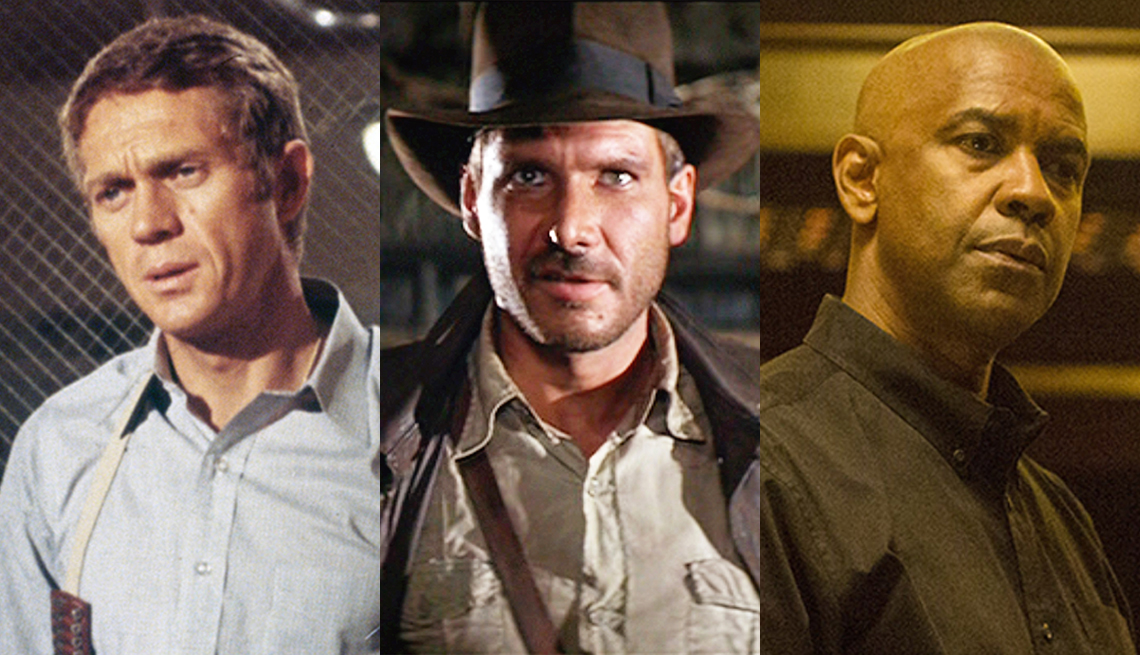 En español | Summer and action movies go together like, well, Bruce Willis and a green screen. Or Steve McQueen and the hills of San Francisco. Or Harrison Ford and a bullwhip. Buckle up for our critics’ top 10 action movies ready to stream right from your sofa.

You may need to pick up some Dramamine before watching the famous 11-minute car chase through the bumpy streets of San Francisco. Steve McQueen (who'd been hugely embarrassed when it was revealed that he didn't perform the motorcycle stunts in 1963's The Great Escape) insisted on doing a bunch of the driving himself, hitting speeds of over 110 miles per hour (and at one point accidentally crashing into a parked car). But there's more to Peter Yates’ gripping detective story than the scenes with the Mustang and the Charger. Jacqueline Bisset sparkles in an early starring role, Robert Vaughn delivers a career-best performance as a slimy politician, and McQueen's wardrobe (turtlenecks with holster) made cops look criminally fashionable.

ATTENTION, STEVEN MCQUEEN FANS: Want a peek at those incredible motorcycle stunts in The Great Escape? Check it all out in our critics’ roundup of The Best World War II Movies Ever Made.

Bruce Willis’ blue-collar Bond — regular schmo John McClane — didn't wear tuxedos or fire off sardonic bons mots after slaying bad guys. He made do with a ripped T-shirt (the actor later donated the rag to the Smithsonian) and an R-rated catchphrase ("Yippee ki yay mother----er"). Still, John McTiernan's shoot-'em-up masterpiece turned out to be a near-flawless action romp. For one thing, it features the most diabolically debonair villain ever thrown off an L.A. high-rise, Alan Rickman's Hans Gruber ("I could talk about industrialization and men's fashion all day …"). The late British stage actor nearly turned down the part (he thought action movies were tacky), and Willis was cast only after Sylvester Stallone, Arnold Schwarzenegger, Burt Reynolds and Richard Gere turned down the lead … thank God.

Sylvester Stallone was set to play Axel Foley in this Don Simpson action-comedy about a scrappy Detroit cop who goes undercover in the 90210 Zip code. But Sly changed his mind just two weeks before production began, so enter Eddie Murphy. The then-23-year-old SNL comedian turned what might have been a by-the-numbers 1980s retread into one of the most successful R-rated action films of the decade ($316 million in the U.S. alone). Murphy returned to the part twice more in sequels and even popped up as the character in a 2013 CBS pilot for a series based on the films. But the network nixed the idea when Murphy made it clear he wasn’t interested in reprising the character as a recurring role on TV, despite raves from the pilot’s test audiences. “They had this little knob that you turn if you like it or you don’t like it,” Murphy recalled in a 2015 interview. “So when Axel shows up in the pilot, some people turned the knob so much they broke it.”

Obviously, there were action movies before Bond, James Bond. But he's the guy who launched the modern spy franchise (25 films and counting). And while no Bond movie is perfect, this one comes close. It's got Gert Fröbe's bloated baddie (the German actor's accent was so thick Sean Connery couldn't understand a word he was saying and all Fröbe's dialogue had to be dubbed in post), a preposterous evil scheme (nuking Fort Knox to jack up the price of gold) and an even more preposterously named femme fatale (Honor Blackman's Pussy Galore). Not to mention the coolest ride in movie history, the top-blowing Aston Martin DB5, which the esteemed British auto company is now, 56 years later, bringing back in a limited 35-car edition, complete with (nonworking) machine guns under the grill. The sticker price is a positively shocking $3.5 million.

SUMMER MOVIES INTEL: Even if we're watching from home, we're still going to get some hot new summer movies coming our way. Don't miss out! Check out our critic's Summer 2020 Movie Preview: Films You Won't Want to Miss.

What Steven Spielberg really wanted to do was direct a James Bond movie. But 007's producers gave him the cold shoulder, so he and pal George Lucas cooked up their own dashing hero, Indiana Jones, and launched their own franchise, which has turned out to be about as indestructible as its star (a fifth installment, with 77-year-old Harrison Ford again brandishing the whip and fedora, is slated for July 2022). The film almost got an R rating — the exploding Nazi head at the end was a bridge too far for MPAA censors — but Spielberg softened the scene just enough for a PG-13. And Raiders ended up earning a best picture nomination, almost unheard of for an action movie. Eat your heart out, Mr. Bond.

Screenwriter Shane Black was only 24, fresh out of UCLA's drama school, when he sold his spec script about two mismatched L.A. cops — one a family man (played by Danny Glover), the other a suicidal sociopath (you know, Mel Gibson). It was a totally fresh take on the action formula — a character-driven drama that happened to have explosions in it — and it changed everything for the genre. “Action movies before then, it was all generic characters and gratuitous violence,” director Richard Donner said in describing the difference. “But the characters in Shane's script were so brilliant, the action just became part of the metaphor. I'd never read anything like it.” He would read more like it afterward; the movie launched three sequels.

Technically, this is George Miller's fourth Mad Max movie, but it's like nothing he (or anybody else) had put on screen before. The totally gonzo $150 million postapocalyptic thrill ride has Tom Hardy taking over the title role from Mel Gibson (like pretty much everything else in this movie, continuity with the previous films gets thrown under the wheels), while Charlize Theron's one-armed warrior gives the plot a cool postfeminist twist. There are cars fueled by blood, psychos strumming flaming guitars while strapped atop hurtling RVs, and a bonkers religious cult that seems to be based on an old Duran Duran song. Best of all, many of the berserk stunts in the movie — which got nominated for best picture as well as nine other Oscars — were performed the old-fashioned way, without CGI.

It’s based on the cheesy 1980s TV series of the same name but aside from the premise — a retired covert ops agent becomes a freelance trouble-shooter — there isn’t much of a resemblance. For one thing, the film version stars two-time Oscar winner Denzel Washington, who brings considerably more gravity to the role than the old TV show’s star (British actor Edward Woodward). For another, it’s directed by Training Day auteur Antoine Fuqua, who made sure the movie deserved its R-rating by adding tons of extra-crunchy violence to the action sequences (in one scene, Washington jams a corkscrew into a man’s chin, in another he skewers somebody with a tree trimmer). The film grossed $192 million domestically, enough to inspire a sequel, the only time Washington has ever played the same role twice.

OK, so it was a flop at the box office — it grossed only $107 million worldwide — but watching Guy Ritchie's super-stylish retro spy thriller is like discovering a goofy lost masterpiece from the swinging ‘60s (it's based on NBC's 1964-68 series). The on-screen chemistry of its stars — with Henry Cavill and Armie Hammer playing Napoleon Solo and Illya Kuryakin, an American and a Soviet agent who team up with Alicia Vikander (as the daughter of an East German scientist) to thwart a plot to sell nuclear secrets to leftover Nazis — is almost as explosive as the action sequences.

In a blue-pill alternative universe, Neo would have been played by Will Smith and Trinity by Sandra Bullock. But those actors turned down the parts — as did Russell Crowe with Morpheus, admitting that he “couldn't get past page 42” of the Wachowski brothers’ script — and Keanu Reeves, Carrie Ann Moss and Laurence Fishburne ended up starring in the most revolutionary action thriller of the 1990s. Everything about The Matrix was eye-poppingly new, from its trippy Alice in Cyberland plot to its instantly iconic — and often imitated — “Bullet Time” slo-mo effect (even The Simpsons copied it for an opening couch gag).

Yes, strictly speaking it’s a martial arts movie, but don’t let that fool you. This moody Ang Lee epic is really a sweeping love story that also happens to be filled with soaring rooftop chases and action sequences so kick-ass they’d have The Matrix’s Neo biting his knuckles with envy.  Chinese film legend Chow Yun-fat plays a retiring 19th-century warrior who decides to hang up his 400-year-old sword. But when the blade is stolen, he and his sweetly undeclared love interest — that’d be Hong Kong action icon Michelle Yeoh — embark on an adventure to retrieve it. Critics fell hard for this film, ranking it as one of that year’s best, as did Academy members, who nominated it for nine Oscars, including best picture and best director. It won best foreign language film.

Not everyone was a fan of this big-screen update of the 1960s spy series. Original TV cast member Martin Landau complained that the “script wasn’t that good” and confessed that he turned down a part reprising his character. But Brian De Palma’s slick adaptation made now 57-year-old Tom Cruise into an undisputed action star, lighting the fuse for a franchise that shows no sign of fizzling out (total combined grosses so far: $3.5 billion). A seventh film is slated for release in November 2021 and an eighth in 2022.

Film students still consider Joss Whedon's uncredited rewrite as a master class in streamlined script efficiency. Even though most of the action takes place on a bus — rigged by Dennis Hopper's baddie with a bomb set to explode if it drops below 50 miles per hour, forcing passengers Keanu Reeves and Sandra Bullock to improvise some creative rerouting on LA's 105 freeway — the story never feels cramped or claustrophobic. Pop quiz: Who was originally approached to direct? That'd be Quentin Tarantino.