Dolittle is a jolly family adventure. I'm fool enough to still enjoy watching sassy talking animals acting as foils for the kindly doctor's foibles. And, judging by the staying power of the young audience members glued to their seats at my screening, I'm not alone. As the veterinarian, Robert Downey Jr., 54, goes big and goes batty in this live-action version directed and cowritten by Stephen Gaghan, 54 (Traffic, Syriana). Owing little to previous incarnations — whether the hilarious Eddie Murphy, 58, or the talk-singing Rex Harrison before him — Downey's Victorian vet is grizzled, trilling with a Scottish burr, and depressed. After the shipwreck death of his beloved wife, the doc displays a heaping helping of PTSD.

In exile from the cruel world, surrounded by outcast beasts and insects, Dolittle does, well, very little — and most of that in his bathrobe. He plays and banters with a fearful gorilla, a chilly polar bear, mocking mice, an angry emu, a bossy parrot and a resentful rescue squirrel, among many other chatty fauna. But just when he's almost escaped the human rat race, Dolittle gets pulled back into society: Queen Victoria (Jessie Buckley) is near death. Only he, with intelligence gleaned from a nearby octopus, can discover her ailment's cause and chase down the cure. We won't quibble with the plot points that set Dolittle on his quest alongside docile apprentice Tommy Stubbins (Harry Collett) — we're dealing with talking animals here. Total realism is not the point. 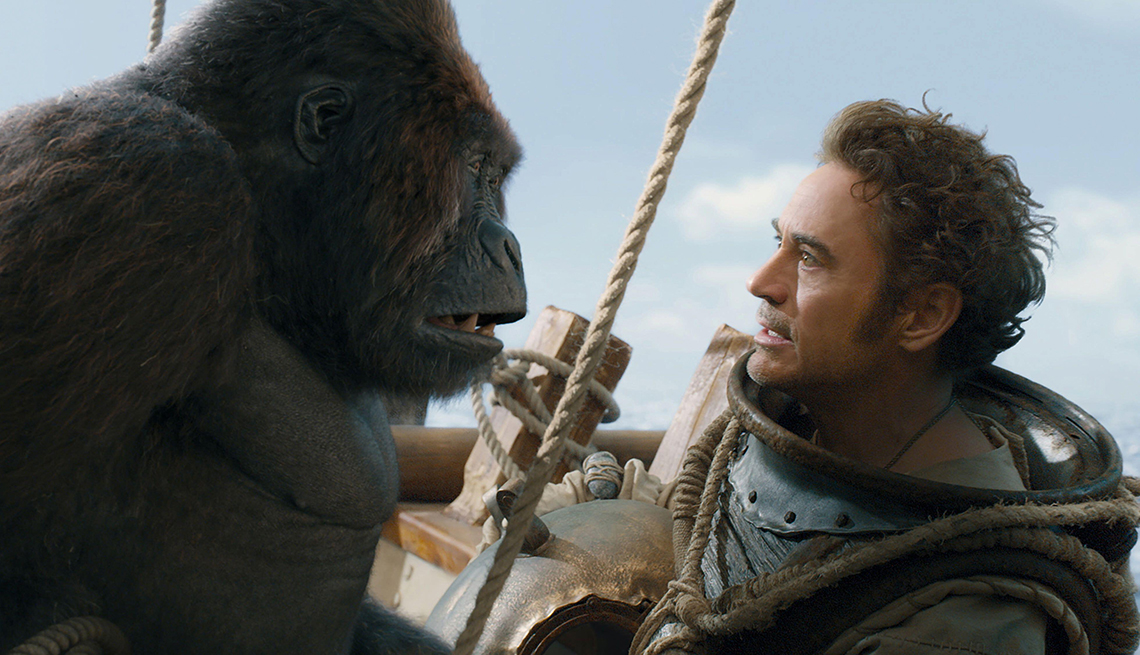 Embroidering the adventure is a who's who of notable vocal talent, including a charming Emma Thompson, 60, as the domineering Polly the parrot alongside a tortured Ralph Fiennes, 57, as Barry the troubled tiger and Octavia Spencer, 47, as one-legged Dab-Dab the duck. Again, all very jolly. Add to this a dazzling array of overqualified villains with Michael Sheen, 50, as Dolittle's chinless rival, a bewigged Jim Broadbent, 70, as a scheming ignoble nobleman and a bouncy Antonio Banderas, 59, as Dolittle's far-flung nemesis. There's enough grownup mustache twirling in that trio to keep the sequences lively as the good doc and his menagerie set sail to find a cure for what ails the Queen — and face their fears and reclaim their souls.

I kept expecting the oversized, CGI-enhanced entertainment to wear me out like the piñata-poking climax of a rainy-day birthday party. But the set pieces kept my interest, from the neurotic yet ferocious Barry duking it out opposite his former doctor in a dungeon duel to a chase scene that substitutes a galumphing giraffe for the getaway vehicle. And don't get me started with Dolittle's extraction procedure on a damaged dragon who has eaten more than her share of armored adversaries — strange but grossly fascinating. Sure, there were too many passing gas gags, and a certain amount of lazy, rude jokes expected to fly over the kids’ heads and entertain their folks, but the Iron Man megastar captures the zaniness of talking to animals as nutty as he is. It's a jungle out there — and Downey's doctor is way, way out.