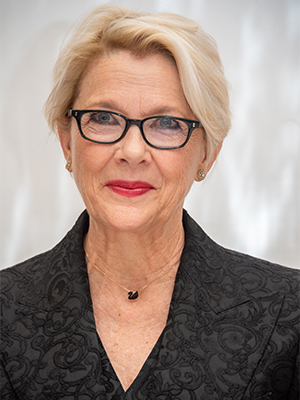 En español | Annette Bening will receive the 2019 Movies for Grownups Career Achievement Award on Jan. 11 at the 19th annual Movies for Grownups Awards ceremony in Beverly Hills. Bening's honor is especially notable for grownup audiences because she has earned most of her Oscar, Emmy and Golden Globe honors after 45.

"Annette Bening has captured our hearts and entertained us for years with her performances,” said Myrna Blyth, senior vice president and editorial director for AARP Media. “We are thrilled to award Annette with our highest honor and recognize a remarkable career.”

"These awards acknowledge the kinds of movies we need and don't get enough of,” said Bening. “In that way, the awards are advocates for good moviemaking, for meaningful moviemaking. And to be a part of this is very gratifying."

Bening broke out as a movie star at age 33, earning the first of her four Oscar nominations for best actress in The Grifters, followed by American Beauty, Being Julia and The Kids Are All Right. Many pundits predict a fifth Oscar nomination for The Report, which opens this month. Her films have earned more than $2 billion, and it's only fitting that her character in the blockbuster superhero film Captain Marvel is named Supreme Intelligence.

The event will be broadcast Jan. 19 on PBS (check local listings), pbs.org/gperf and the PBS Video App. The award show is produced by Great Performances and AARP Studios. The winners are also featured in AARP The Magazine, whose 39 million readers constitute an audience that drives excellence in Hollywood. An AARP study found that moviegoers over 50 account for 30 percent of all visits by moviegoers in America, and 75 percent of all visits to art-house movies.

Consumer Cellular is the presenting sponsor for the Movies for Grownups Awards. Event proceeds benefit AARP Foundation, which works to end senior poverty by helping vulnerable older adults — in Los Angeles and across the country — build economic opportunity and social connectedness.