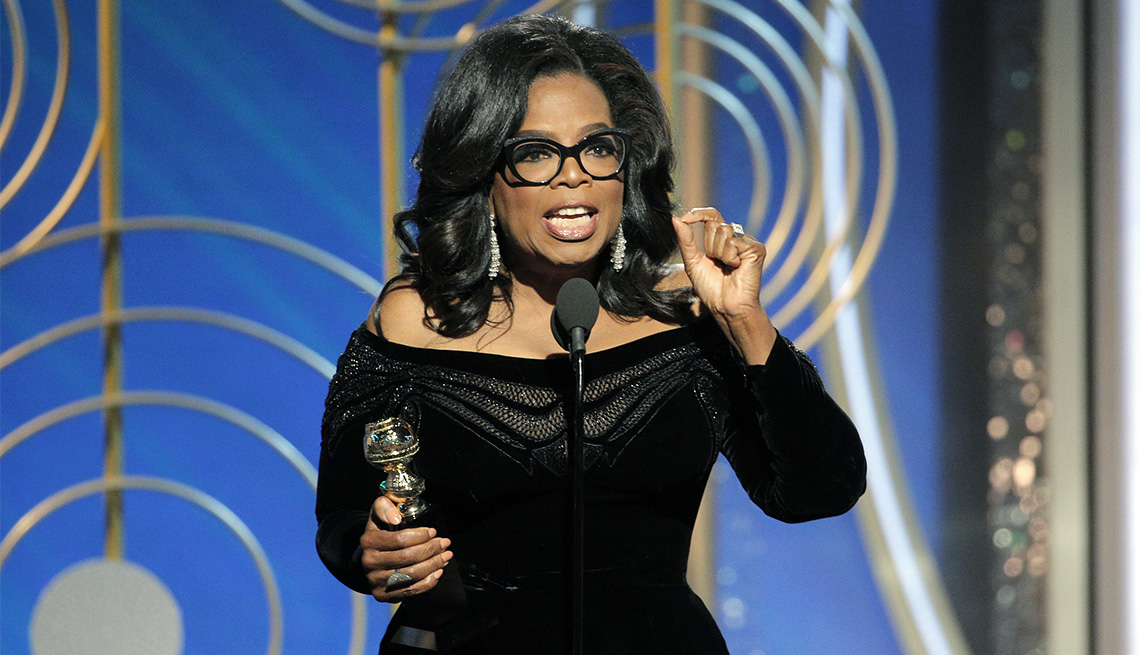 Seven stars over 50 earned Golden Globes Sunday, beating more youthful competitors in seven out of 17 categories. But no one shined brighter than Oprah Winfrey, 63, who won the Cecil B. DeMille Award for her outstanding contributions to the world of entertainment, and gave such a soaring speech that it inspired the Los Angeles Times to headline a story: "Is She Running for President? She Should!"

In a year when the Globes startlingly transcended their traditional reputation as an occasion for stars to party, almost every winner, clad in black in solidarity with the new antisexual-misconduct initiative Time’s Up, gave a substantive, inspiring speech about the issue that dominates Hollywood, politics, government, business and other parts of the American work environment. Even Frances McDormand, the winner for best actress in a motion picture drama for Three Billboards Outside Ebbing, Missouri, said she is usually private about her politics, but: “It was really great to be in this room tonight, and to be part of a tectonic shift in our industry’s power structure.”

Winfrey, however, topped them all with a poignant oratory that evoked three rounds of applause and a standing ovation. The first black woman to win the DeMille award, she brilliantly dramatized the growing power of women and minorities by noting the recent death of Recy Taylor, raped in Alabama in 1944 by six men who were never charged because Rosa Parks, who investigated her case, couldn’t get them prosecuted. “She lived as we all have lived, too many years in a culture broken by brutally powerful men,” Winfrey said. “But their time is up. Their time is up. So I want all the girls watching here now to know that a new day is on the horizon!”

Also inspiring were the seven wins by veteran actors with years of experience in Hollywood. And yes, there were a few snubs, as well. 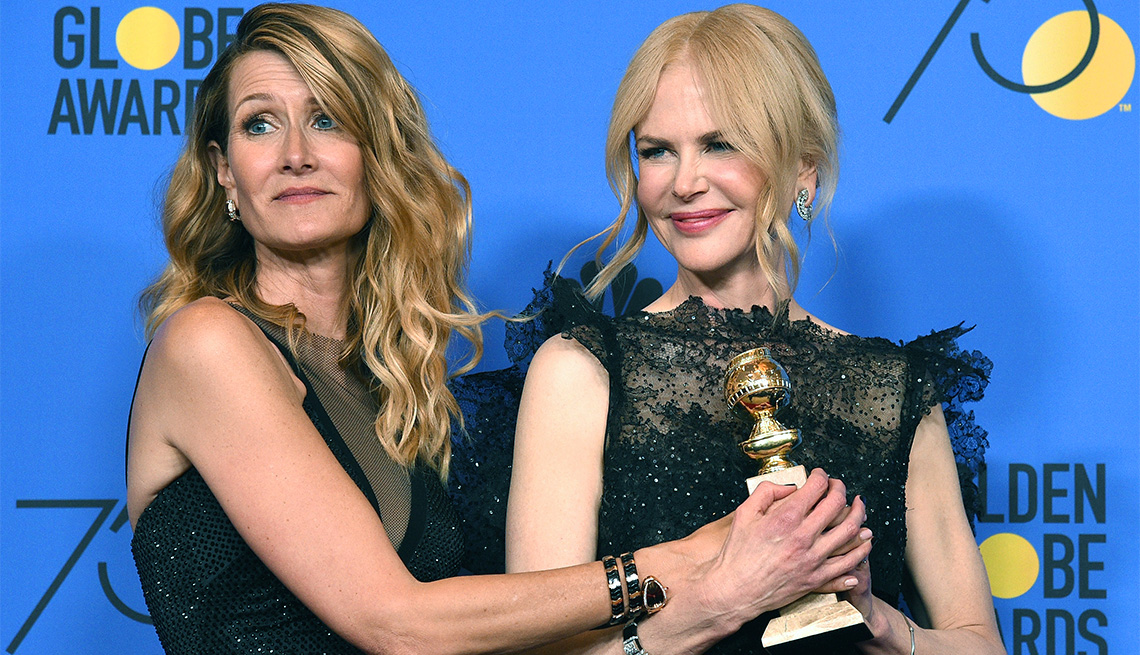 Allison Janney, 58, has won seven Emmys (mostly for The West Wing), but it took her six nominations to finally land a Globe, as the hilariously scary mother in I, Tonya.  Unfortunately, that meant Laurie Metcalf, 62, the mom in Lady Bird, a less flashy but deeper character, did not win — though she's still a favorite for an Oscar nomination.

Frances McDormand, 60, may be the most reluctant awards campaigner since George C. Scott, who called the Oscars “a goddamn meat parade.” But the Globes showered Three Billboards Outside Ebbing, Missouri with four big wins, meaning McDormand may now face higher odds of collecting an Oscar, as well.

Nicole Kidman, 50, won for the much-acclaimed HBO series Big Little Lies, as expected. Less expected was that it would win four awards, while Feud: Bette and Joan would lose all its nominations, including those for its stars Jessica Lange and Susan Sarandon.

Laura Dern, 50, also triumphed in Big Little Lies, ensuring that the HBO after-Globes party, ordinarily the most glamorous and popular of all, would be especially so this year. But her castmate Alexander Skarsgard’s win over Feud’s Alfred Molina, 64, and Fargo’s David Thewlis, 54, is a painful snub to those other series.

Gary Oldman, 59, won his first Globe ever, proving that snubbed Tom Hanks is not invincible, nor Daniel Day-Lewis, not even in the last role of his career. The snubs cast shade on the awards hopes of The Post (Hanks) and Phantom Thread (Day-Lewis).

Composer Alexandre Desplat, 56, got his second Globe in nine nominations, thanks to The Shape of Water, which is shaping up to be a bigger awards magnet than some had thought an interspecies romance would be. It’s encouraging that four of the five contenders are over 50, and Phantom Thread’s Jonny Greenwood is 46.

Guillermo del Toro, 53, never made an English-language critical smash before The Shape of Water, but now his future is in great shape. And when producers tried to play him off during his speech, he used his new clout to demand more time: “Lower the music. It's taken 25 years [to get here]. Give me a minute. Give me a minute!” His success is encouraging proof that grownup talents, if they persist, can achieve their golden moment.

Other snubs of the night included: Willem Dafoe, star of The Florida Project, who’s been so good for so long that it might have seemed less dramatic to give the Globe to him rather than to Sam Rockwell, who took his first leap into the spotlight as best supporting actor in a motion picture drama for Three Billboards; Robert De Niro as Bernie Madoff in The Wizard of Lies, Geoffrey Rush as Einstein in Genius and Kyle MacLachlan in Twin Peaks — all of whom lost to Ewan McGregor in Fargo for best actor in a limited series or television movie; and the all-star team of Tom Hanks, Meryl Streep and Steven Spielberg, none of whom won for starring in and directing The Post.