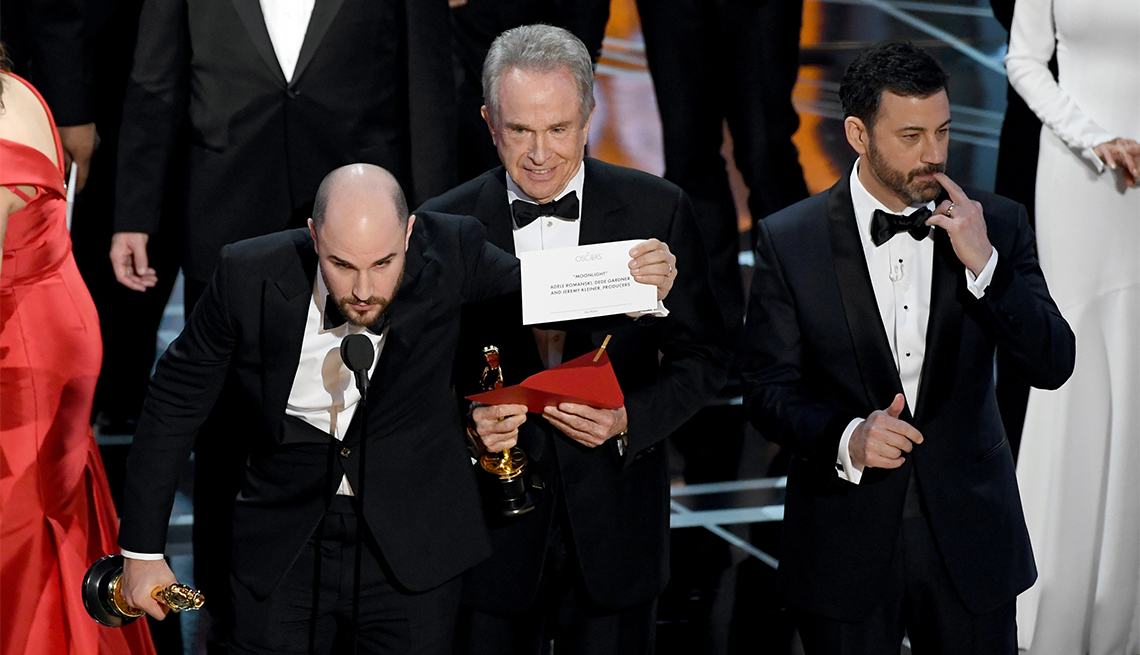 'La La Land' producer Jordan Horowitz tells a stunned audience that 'Moonlight' was the actual winner as Warren Beatty holds up the correct envelope next to host Jimmy Kimmel.

Warren Beatty and Faye Dunaway’s epic fail. The costars of Bonnie and Clyde gave the night’s biggest award to the wrong movie. Moonlight went home with the best picture award, but for a few short minutes La La Land got the glory (and acceptance speeches) —  because Beatty, it seems, had been handed the wrong card.

Viola Davis’ emotional thanks. The best-supporting actress paid tribute to her parents, playwright August Wilson, Fences director Denzel Washington, her husband and her daughter. A standout in red Armani, Davis declared acting the “only profession that celebrates what it means to live a life.” An AARP Movies for Grownups winner this year, too, Davis now has an Oscar, Emmy and Tony award.  Other Movies for Grownups winners who took Oscar home include Manchester by the Sea director and writer Kenneth Lonergan and La La Land director Damian Chazelle.

Flying snacks. Stars like Hacksaw Ridge director Mel Gibson munched on candy that dropped from the ceiling in the Dolby Theatre. Hacksaw’s Andrew Garfield, a best actor nominee, delighted in catching the bags. 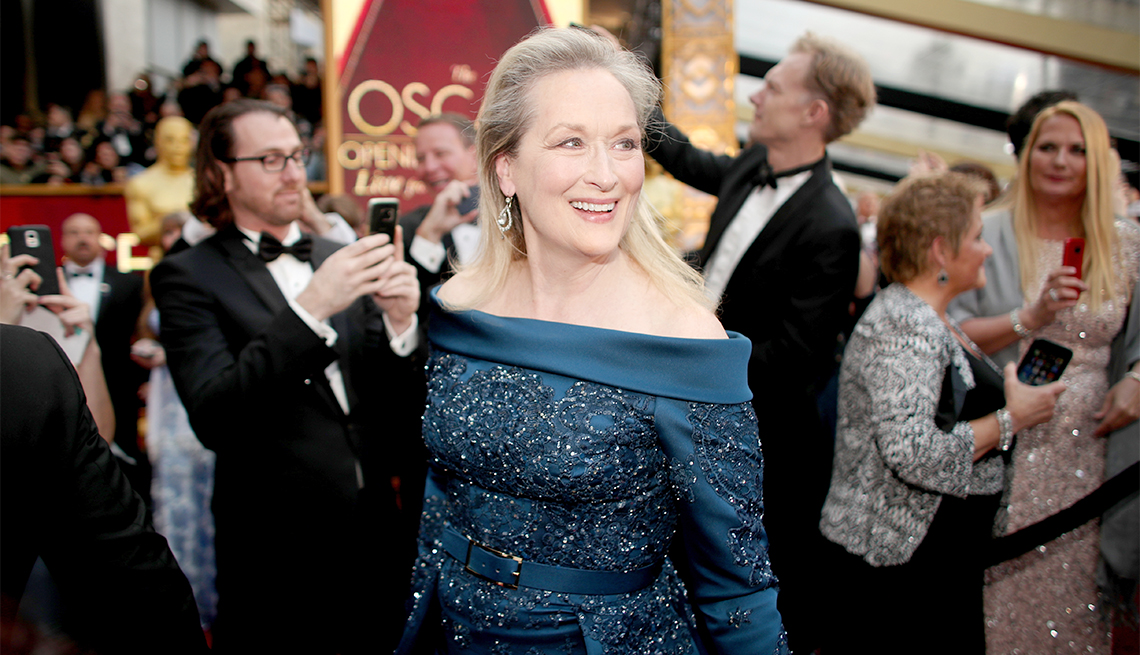 Meryl Streep, up for Best Actress for her role in 'Florence Foster Jenkins,' wore a stunning blue Elie Saab gown.

Jimmy Kimmel’s parody tribute to Meryl Streep. The Oscar host gave the actress props on her 20th Oscar nod and went on to talk about her “uninspiring and overrated performances.” Streep was her usual good-sport self, playing along with Kimmel’s bit. And after two days of controversy about whether she had ditched Karl Lagerfield to get paid for wearing another designer’s dress (she says she didn’t), she was elegant in a blue Elie Saab gown.

Colleen Atwood’s true surprise. "I’m floored,” said the veteran costume designer, who won her fourth Oscar for Fantastic Beasts and Where to Find Them. She was visibly stunned and confessed to being unprepared: “Sting told me I was going to win tonight and I didn’t believe him.” 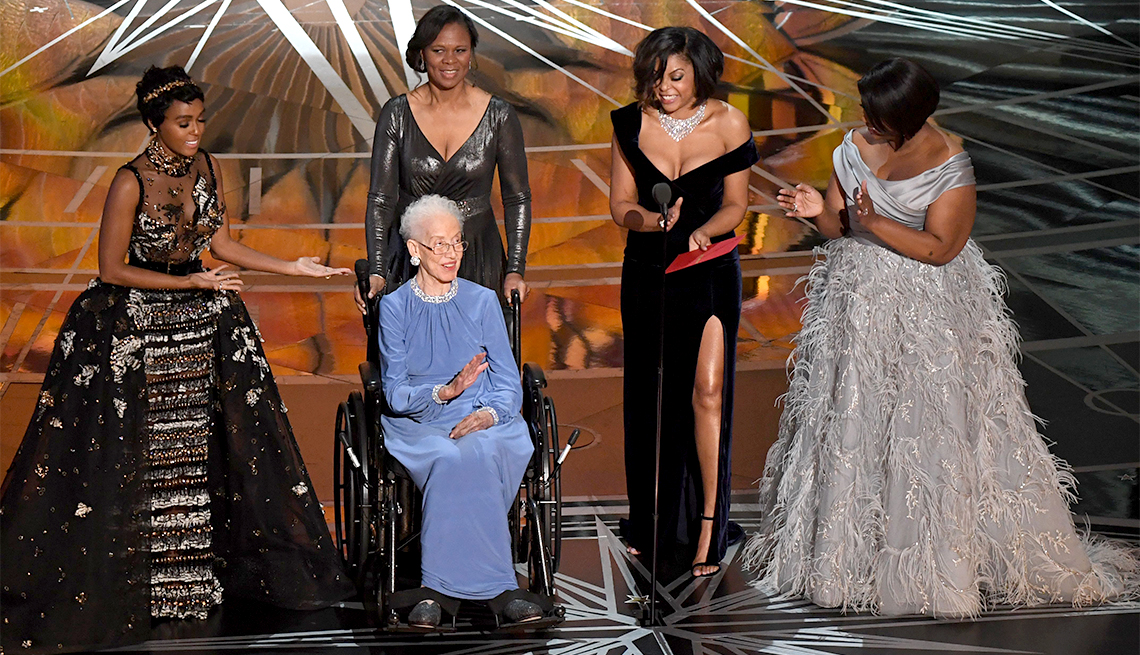 The ladies of Hidden Figures. Janelle Monáe, Taraji P. Henson and Octavia Spencer, who have been stunning on the awards circuit all season, were better than ever on the Oscar stage, plus they cracked up the crew at rehearsal on Saturday. And they created a magic moment for Katherine Johnson, one of the women mathematicians at NASA portrayed in the movie. Johnson received a standing ovation when they introduced her to the Hollywood crowd.

Michael J. Fox’s DeLorean arrival. It was Back to the Future and, frankly, fabulous to see Fox — appearing with Seth Rogen — looking so good in it. 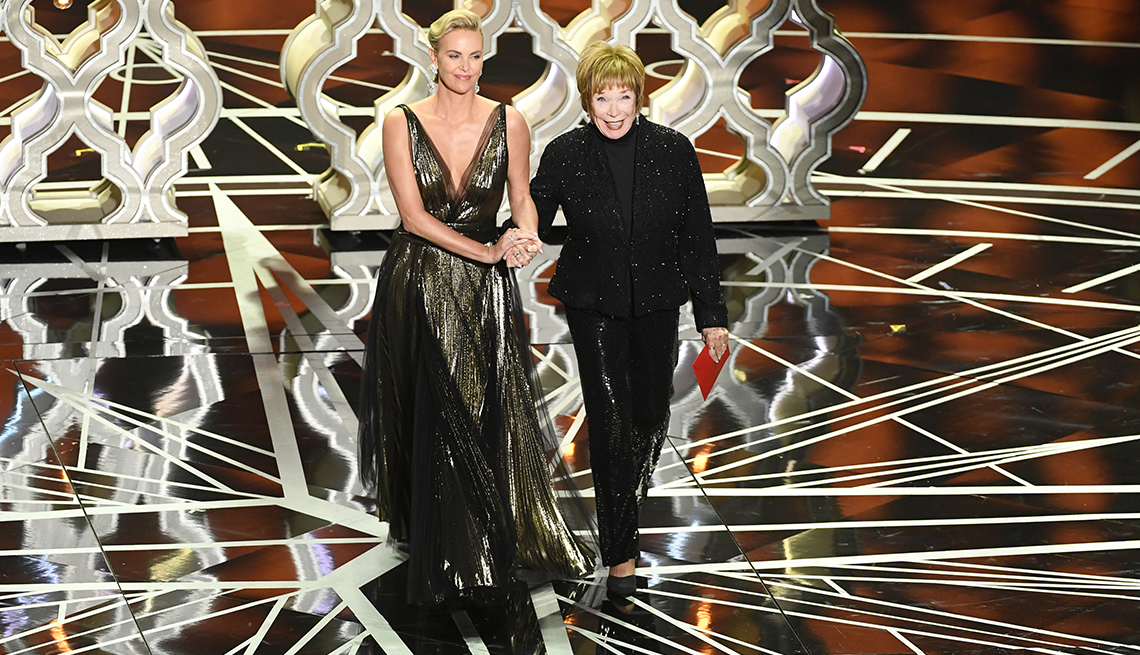 Charlize Theron, left, said co-presenter Shirley MacLaine was an inspiration to her as a young actress.

Shirley MacLaine’s reception. The actress got a standing ovation when she presented an Oscar with Charlize Theron. “That’s the nicest reception I’ve had in 250,000 years,” quipped the cheeky actress, who is famous for her New Age beliefs, including reincarnation.

Sting singing. A tuxedoed Sting and his wife of more than 30 years, Trudi Styler, on the red carpet — paying respect to murdered journalist James Foley, the subject of the documentary Jim: The James Foley Story. Sting performed the movie’s ballad “The Empty Chair,” which was nominated for best original song.