En español | Michael Douglas was the man of the hour at the 15th Movies for Grownups Awards Monday — but the ballroom of the Beverly Wilshire Hotel in Los Angeles was packed with an A-plus list of movie legends, all of whom were out to have a good time. That — and raising money for AARP Foundation — was what the night was all about.

“I’m here to have fun!” said Dick Van Dyke, the first to arrive. The TV legend immediately set the tone, crossing his eyes for the cameras. “I guess I never grew up. I feel 13 years old emotionally.”

Bruce Boxleitner presented the Best Documentary award for The Last Man on the Moon  — but that was no moon rock on the finger of Boxleitner’s new fiancée Verena King.  “I did a lot of space flight on my TV series Babylon 5,” Boxleitner said, laughing. “But of course, my spaceships were made out of plywood.”

“Lou! Are you turning 50?” Morgan Freeman bellowed as he grabbed his old pal Lou Gossett Jr., 79, by the shoulders. Meanwhile, Wendie Malick yelled for their attention, holding a cellphone camera ready to take a shot. Freeman was there to accept Best Grownup Love Story for 5 Flights Up and Gossett was the presenter.

Best Actress winner Lily Tomlin paid special tribute to her Grandma “costar,” her own 1955 Dodge Lancer.  “Her name is Dora Bannister,” Tomlin deadpanned. “She recently had to get new brake pads, which is kind of like knee replacement. But it’s OK because she has Obamacar!” Bruce Boxleitner, with his fiancée Verena King, presented the Best Documentary award for 'The Last Man on the Moon.'

Meanwhile, Dick Van Dyke was dancing in the wings to "Don’t Leave Me This Way" while onstage it was being performed by disco diva Thelma Houston.  “I can still do the chimney sweep dance, 50 years on!” he said.

Best Actor winner Bryan Cranston asked that Van Dyke, his childhood hero, a mentor and friend, present him with his award. “I remember first seeing his work when I was 8 from the back seat of my family’s station wagon at the drive-in theater watching Mary Poppins,” said Cranston, honored for his work in Trumbo.

“I first met Sir Ben Kingsley playing his lover,” recalled Patricia Clarkson as she accepted the Best Buddy Movie award for Learning to Drive. “Now I’m his buddy! There’s a lesson there, ladies!”

Bette Midler, who presented the Career Achievement Award to Douglas, said his greatest role may have been his Emmy-winning performance in HBO’s Behind the Candelabra, playing Liberace, “in which he got to make out with Matt Damon … something not even Ben Affleck can claim.”

“I never made a conscious decision to make grownup movies,” Douglas told us on the red carpet. “I was just embarrassed about the cost of two hours of entertainment. Nothing against McDonald’s, but instead of a Big Mac I’d rather pay that kind of money on a movie that gives us some food for thought.”

Astronaut Eugene Cernan, subject of the Best Documentary winner The Last Man on the Moon, provided the night’s most poignant moment. He recalled visiting the graves of the Apollo 1 crew, who died on the launch pad in 1967, at Arlington National Cemetery. “I looked at their headstones and I kept thinking: ‘Why am I here … and why are you there?’” 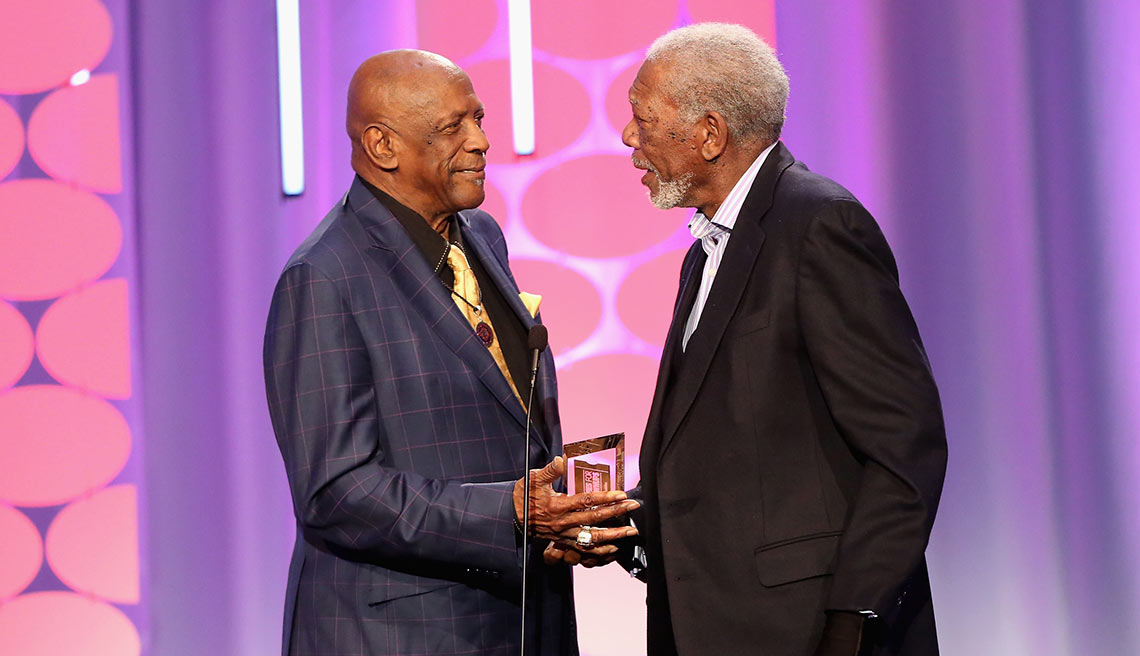 Morgan Freeman’s eyes shot wide open when he realized he was standing next to Cernan. “Boom!” he shouted, shooting his index finger up like a rocket. “I was at home in New York City when the moon landing happened, and I was crying!” Freeman told him.  Cernan asked Freeman for his secrets to success. “Faith, luck — OK, maybe money,” Freeman said.

Former studio head and producer Sherry Lansing, a cochair of the awards event committee, credited Movies for Grownups with moving the needle against ageism in Hollywood. “It's had an enormous effect,” she said. “The studios began to realize that the boomers were alive and well and that we still wanted to see movies. We are still relevant and we are not going away.”

“You’ve got to stay open-minded,” 90-year-old Dick Van Dyke told us. “They used to sing, ‘Hope I die before I get old.' Those guys didn’t know what they were missing. This is the best time of life!”

Ed Asner, who told us he came to the party “looking for trouble,” said the first time he felt like a grownup was at his son’s bar mitzvah.  “So he became a man and I became a man on the same day,” he laughed. Embracing his old friend Pete Docter, writer/director of Inside Out, the 86-year-old star said, “Age has no limits on friendship, buddy!”  Docter, winner of this year’s Best Movie for Grownups Who Refuse to Grow Up award, kissed Asner’s head and straightened his black bow tie.

It was bad enough that his character Apollo Creed died in Rocky IV, but now that Creed’s son is the central character in the Best Intergenerational Movie Creed, Carl Weathers told us, “As a working actor, it would sure be nice to still be in a film series that seems to be going on forever.”

Diane Ladd, winner of Best Supporting Actress for Joy, told us, “They say I’m the heart and soul of that movie because I try to inspire people to fight for what they believe in. I guess that describes the real me, too!”

Douglas and his wife, Catherine Zeta-Jones, looked terrific on the red carpet. Douglas said it’s because they “survived the hornet’s nest” of raising young kids and all the drama that comes with it, "and can now just feel a little like grownups again."

“AARP does a great job caring for the elderly,” Douglas told the crowd. “As does my wife, Catherine, from the moment she married me!” Beaming from her seat, Zeta-Jones blew him a kiss.