(Video) 'Free State of Jones' Movie Trailer: As civil war divides the nation, a poor farmer from Mississippi leads a group of rebels against the Confederate army.

En español | A powerful performance by Matthew McConaughey and an earnest urgency drive Free State of Jones, the fact-based story of a group of Southerners who fought the Confederacy from within during the Civil War.

Alas, those good qualities are undermined by a confused and overlong script. It's understandable, but writer-director Gary Ross allowed his obvious passion for the subject to get the better of him.

McConaughey plays Newton Knight, a Mississippi farmer who, disgusted that the South is "sending poor men to fight a rich man's war," deserts his Confederate Army unit. He returns home and is soon leading a rebellion of local farmers and escaped slaves, harassing the Rebel soldiers who are trying to confiscate local crops and livestock to feed the troops at the front.

We follow the exploits of this ragtag band for much of the film's lengthy run, and that's just fine; these episodes constitute the best part of Free State of Jones. From their swampland hideout, the guerrillas steal silently among the cypress trees, robbing supply caravans and humiliating the proud Confederate officers. There's a strong Robin Hood vibe at work here, and McConaughey, alternately laid back or burning with indignation, makes an appealing stand-in for Errol Flynn. 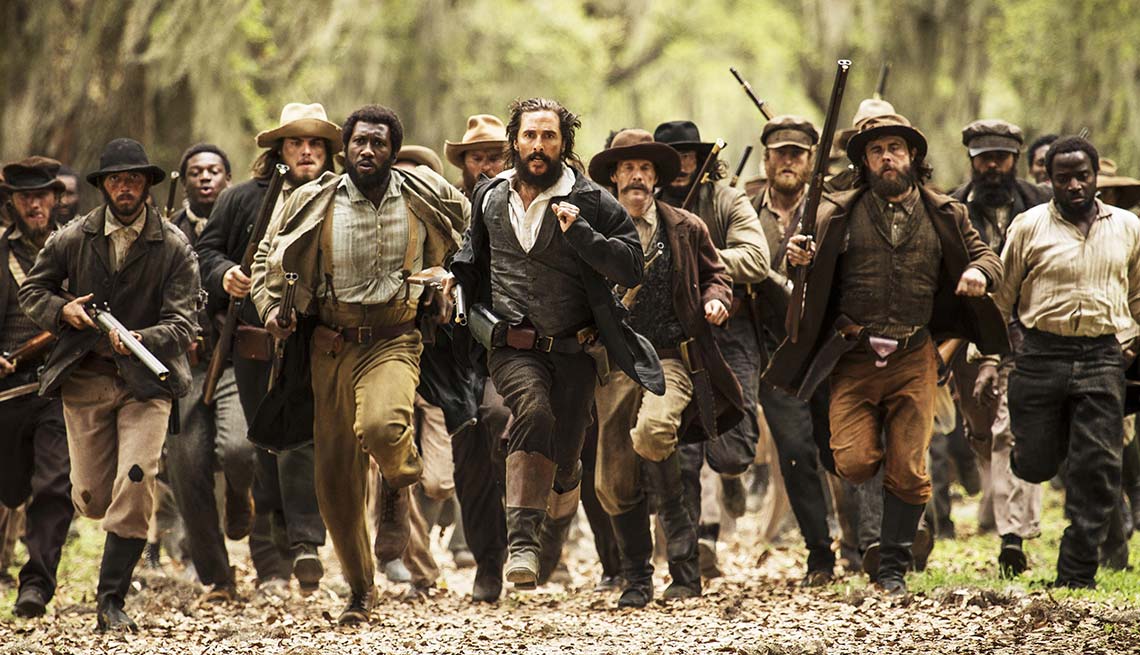 Mahershala Ali and Matthew McConaughey fight back against the Confederacy in "Free State of Jones."

Knight was a defiant egalitarian in a slave-based society. His zealous pursuit of equality defined him as a social crusader, but it can hamstring a filmmaker. Ross, a four-time Oscar nominee (Seabiscuit, Big, Dave), seems intent on giving each character in the movie enough screen time to develop their own story. As a result, Free State of Jones is an overstuffed cotton bale of a movie, with one player after another stepping forward for their prime-time moment.

To be sure, some of those characters merit a film of their own. Mahershala Ali (The Hunger Games) is a standout as Moses, a former slave who tries to register new black voters, with heartbreaking results. As Rachel, Gugu Mbatha-Raw (Concussion) leads a double life: She's a house slave sexually abused by her master and a backer of the insurgents who becomes Knight's common-law wife. Then there's Knight's actual wife (Keri Russell), who disappears with their son in the first reel, only to unexpectedly return at war's end.

All of these personalities — and others as well — seem to have rich offscreen stories. Ross gives us tantalizingly brief (and often histrionic) glimpses of these deeper lives, but never fully enough to invest the viewer.

Worst of all, about 30 minutes into the film the narrative flashes forward 85 years to the trial of Knight's great-grandson, Davis Knight, played by Brian Lee Franklin. The descendant of Knight and Rachel, Davis has been charged in Mississippi with miscegenation for marrying a white woman. It's a whiplash-inducing moment, introducing an entirely new set of characters and circumstances. Ross keeps returning to that 20th-century courtroom for the remainder of Free State, presumably to remind us that some things never change: Yes, racism persists, but so does the spirit of virtuous defiance. It's a worthy concept — one that will be taken up again in the November film Loving, which dramatizes the 1958 Virginia court case that struck down anti-miscegeny laws nationwide.

Free State of Jones could have benefited from a similar unity of theme. Instead it crams half a dozen movies into one, diminishing its central story — a tale of impassioned principle in the face of violent oppression.