With an AARP membership, there’s always more to discover. Check out your member benefits today.

Veterans Save 20% On Your Membership Today — Receive access to exclusive information, benefits and discounts

“Today, here in the U.S., the 50+ market segment represents 111 million people,” she said. “And 10,000 people are turning 65 every day. That trend is going to continue for at least the next 14 years. We are living healthier and longer. It’s a huge opportunity for the entertainment industry, particularly in movies and television, to get more focused on the likes and dislikes of people 50 and over.”

Yet that reality isn’t reflected in what Americans see on screens both big and small — a state that Wallenstein attributed to “the last bias” in Hollywood — despite some basic facts that Jenkins laid out, citing AARP research to prove her points.“The truth is that 70 percent of the disposable income in this country is in the possession of people 50 and older,” Jenkins said. “And 25 percent of people who are moviegoers are people over the age of 50. They are actually putting butts in the seats in the movie theaters.

“Yet we see across the board that the marketing industry is spending 75 to 80 percent of their dollars focusing on people who are under the age of 30, and mostly young males.”

That traditional Hollywood focus on youth, Jenkins said, is exactly what she wants to help disrupt. From a culture of ageism, the entertainment industry must shift to seeking “an ageless society” where all age groups can see themselves authentically reflected in the stories being told about them. 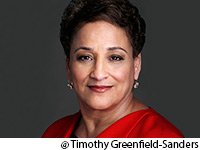 “There is a huge opportunity to reach this demographic,” she stressed. “The opportunity is there, especially considering the fact that people are going to live longer and longer. Our latest research shows that a 10-year-old today has a 50 percent chance of living to be 104 years old. That’s not in the future — that is today.

“This whole idea that at 50 you all of a sudden lose everything that you’ve acquired and experienced over the course of a lifetime, that it goes away, is a total myth. We are actually living 20 to 30 years longer than our parents and grandparents. And we are also living healthier. I often tell people that 50 is not the new 30 and 60 is not the new 40. The fact is, 50 is the new 50, and it looks good.

“It’s OK to be that age and to own and embrace your age,” Jenkins continued, to applause and cheers from the multigenerational audience, which included 94-year-old producer Norman Lear and 31-year-old American Horror Story actress Jamie Brewer.

Jenkins added that working to change ageist perceptions in Hollywood is only one part of AARP’s effort to reset attitudes throughout American society.

“As part of the disrupt-aging conversation, we are actually engaging in different segments of the community — with the technology community,  the housing industry and the education community, along with Hollywood and the entertainment industry. Part of that effort is to get people to forget what they have learned because a lot of those attitudes and behaviors are self-inflicted. They’re societal. We all have our own ageist biases.”

Jenkins concluded by challenging the Hollywood power players in the audience to answer a question that could change the way entertainment content is made, and one that reverberates in the world at large, as well.

“How do we start looking through this disrupt-aging lens and thinking about what’s possible,” she asked, “rather than focusing on our fear?”