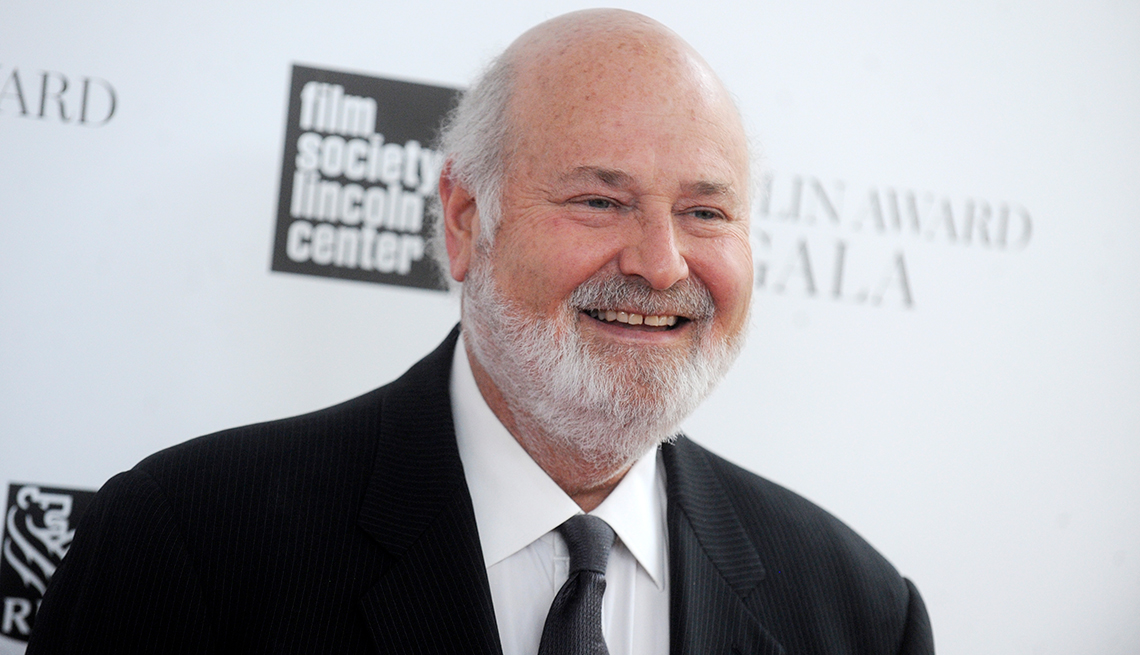 Interview with Rob Reiner about new movie "And So It Goes.'

To quote the song that opens his latest film, Rob Reiner, 67, has looked at love from both sides now. The force behind one of Hollywood's most enduring romantic comedies about young adults, When Harry Met Sally…, Reiner (with stars Michael Douglas and Diane Keaton) tackles more mature matters of the heart in And So It Goes, which opens July 11. The director, whose parents, the comic mastermind Carl Reiner, 92, and his late wife, Estelle, were married for almost 65 years, has learned a lot about the subject of love over the years. Among the lessons:

It doesn't matter how small or who initiates it. "I actually started one of these rituals on [my parents'] anniversary," Reiner says. "Their anniversary was on Christmas Eve — that was the day they got married. And I would give them a little tin of caviar. And they would always buy some tongue to go along with it." Tongue? With caviar? "I know, I know. They bought that from the deli, and that is what they would do. My dad misses her like crazy. He talks about her all the time."

Know what to look for in a partner

Thanks to the scene in When Harry Met Sally… when Meg Ryan fakes an orgasm in a deli, Reiner's mom, who died in 2008 at age 94, will forever be remembered for uttering the famous kicker, "I'll have what she's having." But Reiner says she shared a line in real life that was almost as noteworthy: "When they were married for 60 years, they had celebrated their anniversary. Somebody asked her, 'What's the secret to being married for 60 years?' She said, 'You have to find someone who can stand you. Not somebody you can put up with, but someone who can stand you.' "

Don't be afraid to rewrite your ending

Reiner, who divorced actress-director Penny Marshall in 1981 after 10 years of marriage, never thought he would tie the knot again. But meeting photographer Michele Singer, the woman who would become his second wife during the making of When Harry Met Sally…, changed how that film — and his life — turned out. "I had been single for 10 years after having been married for 10 years," he says. "And so I couldn't see how I would get with anybody ever again. It became the basis for the film. [Screenwriter] Nora Ephron was the prototype for Sally, and I was the prototype for Harry. We had an ending where they didn't get together. But I met [Singer] three-quarters of the way through the movie, and I thought, 'Oh, well, I see how this could work again.' "

Love can lead to self-discovery

In most of Reiner's romantic movies, including And So It Goes, the female characters are more evolved and in touch with their feelings than the men. And the women often encourage the men to become a better version of themselves. Reiner believes that is true in real life as well. "We just had our 25th anniversary," says Reiner, who has three kids ages 16 to 23 from his second marriage. "As you go along, the relationship becomes better and better because you really become best friends. And that has happened. She has helped raise me. The thing I talk about, how women show you what's important, she has done for me."

When Reiner was meeting with press for The Bucket List, his 2007 hit with Nicholson and Morgan Freeman, he got the idea for And So It Goes. "Every journalist would ask us, 'What's on your bucket list?' And whenever they would ask Jack that question, he would say, 'One more great romance.' I thought it would be a great premise for a movie. I called up Mark Andrus (the Oscar-nominated screenwriter of As Good as It Gets ), and he started working on a script."