Eager to re-create the light, European feel of Harvey — this time as a caper film, with romance taking a back seat — Hopkins launched The Love Punch, teaming again with Thompson and reeling in Pierce Brosnan to play her love interest. With stars of that caliber, what could go wrong? 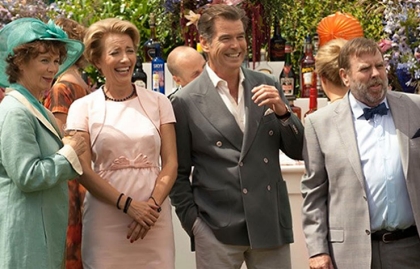 Emma Thompson (in pink) and Pierce Brosnan (dark jacket) in "The Love Punch."

Kate (Thompson) and Richard (Brosnan) have been divorced for eight years. Their two kids have left for college, Kate's in search of something new, and Richard — a once-successful businessman licking his wounds after a failed fling with a cute young thing — is contemplating retirement.

Trying way too hard to appear "over" each other, the pair must join forces to battle Vincent Kruger (played unconvincingly by Laurent Lafitte), the Paris CEO who bought and then gutted Richard's company — including everyone's retirement funds.

And what did the Frenchman do with all those euros? He purchased a $10 million diamond necklace for his lovely fiancée (French actress Louise Bourgoin). Kate and Richard conspire to crash their Côte d'Azur wedding, kidnap the bride and regain what's rightly theirs by stealing the jewelry.

Done right, The Love Punch could have been To Catch a Thief meets The Break-Up. But Hopkins must add layers to a paper-thin plot, so he involves Kate and Richard's former neighbors, the long-married Jerry (Timothy Spall, who finely portrayed Winston Churchill in The King's Speech) and Penelope (Celia Imrie, recently in The Best Exotic Marigold Hotel). Tired of having to choose between their friends in the aftermath of their divorce, Jerry and Pen long to see Kate and Richard reunite. So, of course, they hop a plane to the South of France and join the heist.

Let's hear it for Hopkins' commitment to making films that feature middle-aged protagonists. Hooray, too, for certain Love Punch themes, notably finding love again and deploring the greed that infects today's financial markets. But the timing and tone here are off. The comedy is weak. The chemistry is a clash. Sadly, the best part of The Love Punch is its setting: Paris and the French Riviera? Formidable!

This isn't the first time the multitalented Brosnan has "chosen unwisely" when it comes to film projects. I just hope Thompson — on a much-deserved career upswing of late — is not about to head down a similarly embarrassing path.