If star Denzel Washington and director Antoine Fuqua had unleashed a single surprise in their new action flick, The Equalizer, they would have failed at their mission. The Equalizer is not about breaking new cinematic ground. Nor is it about finding meaning or creating art. Instead, The Equalizer is about watching Denzel — older and wiser than those around him — kick bad-guy butt against a backdrop of dark alleys and rusting cityscapes. And that's just fine, because no one does the dead-eyed-hero bit better than Denzel, and few directors choreograph action more deftly than Fuqua (Training Day, Olympus Has Fallen). 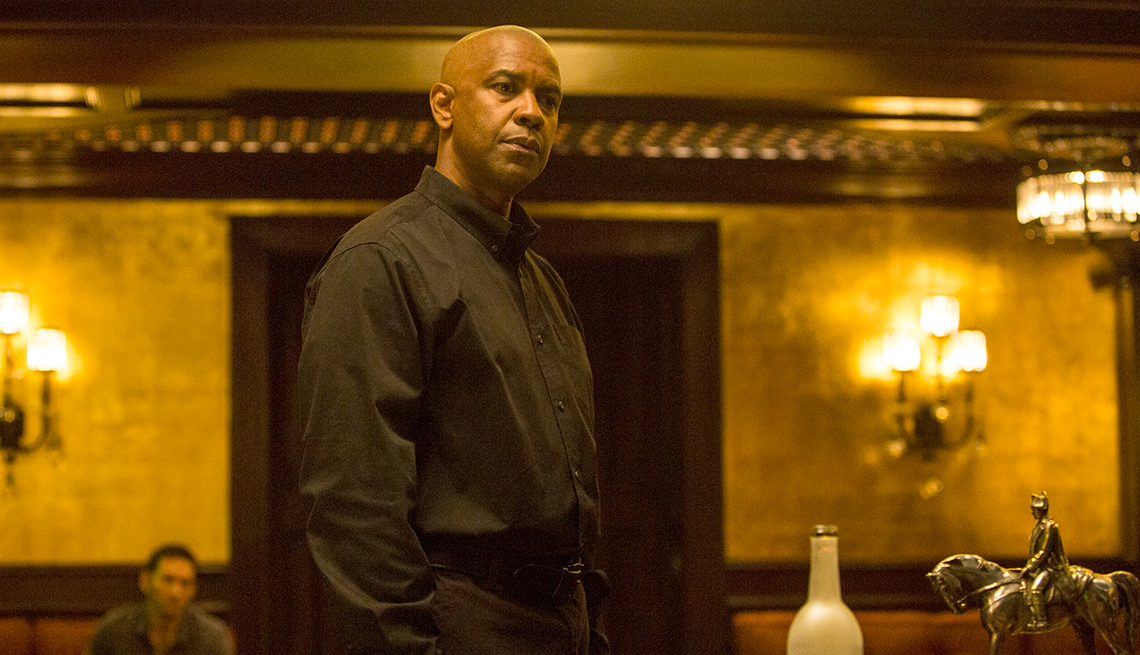 In standing up for the little guy in “The Equalizer,” Denzel Washington, with rubber mallet and more, coolly takes on the bad guys.

Many of us hold fond memories of the 1980s TV series The Equalizer, starring Edward Woodward as Robert McCall, a former government agent who uses his skills to help ordinary people overcome threats from the rich, the powerful and the mean. This update keeps McCall's name and mysterious background but moves the action from Manhattan to Boston.

One night the Equalizer comes to the aid of a young prostitute (Chloë Grace Moretz) who's been roughed up by her pimp. In the process he slaughters a roomful of thugs using his bare hands, the gangsters' own gats and a conveniently murderous corkscrew. But McCall also runs afoul of an Eastern European crime syndicate. Worth noting: Both The Equalizer and The Drop, opening within a week of each other, enlist Eastern Europeans as their bloodlusting villains, thus cementing the region as Hollywood's current go-to source of malefactors. This should allow Germans, white South Africans and assorted Middle Easterners to breathe easier for a while. (Sorry, multinational CEOs and Wall Street stockbrokers!)

The mob's kingpin, ensconced in a palace somewhere in Russia, dispatches ever-larger contingents of hitmen to track down McCall. They are directed on the ground in Boston by a mild-mannered sociopath (Marton Csokas), who we know — we just know! — will be the last man standing when the time comes for the ultimate showdown with our hero.

During the long chase, McCall eludes assassins in his apartment, outruns their bullets on the street and cheekily blows the kingpin's oil tanker to smithereens in Boston Harbor — occasioning the inevitable slo-mo scene in which Denzel coolly walks away as the gates of hell explode behind him. He also makes a pit stop at the estate of a couple of old friends from the Agency. (Bill Pullman and Melissa Leo; please, God, can they play larger roles in the presumed sequel?)

That final shoot-out with the evil henchman comes right when we expect it will, and where: at McCall's big-box store. The setting enables our resourceful hero to avail himself of all manner of home-improvement products in the creation of mayhem. Propane tanks, barbed wire, gravel, sprinkler systems — and, yes, that old standby the nail gun — let McCall bring new meaning to the words "Do it yourself."

In his quieter moments, McCall is a voracious reader. That's Hollywood shorthand for "Yes, he's a killing machine, but he's a sensitive killing machine." But it also enables director Fuqua, in a last-minute bid for respectability, to place in McCall's hands a copy of Ralph Ellison's landmark 1952 social novel, Invisible Man. Even if you haven't read that experimental manifesto since high school, the image of its distinctive blue cover will remind you of the song the book's unnamed narrator constantly listens to: Louis Armstrong's "(What Did I Do to Be So) Black and Blue."

For a fleeting moment you wonder if The Equalizer might actually be about something. In reality, though, that literary coda just slaps a bow tie on a pit bull: It may class him up a bit, but at heart he's still a lean, mean junkyard dog.