Stop me if you've heard this one: Terrorists seize the White House, and only a loner cop and a brave young kid stand between them and their nefarious goal of …

Wait, why didn't you stop me? Because so far, that plotline mirrors precisely the story lines of both Olympus Has Fallen, which opened in late March, and White House Down, which is just now exploding on to a screen near you. 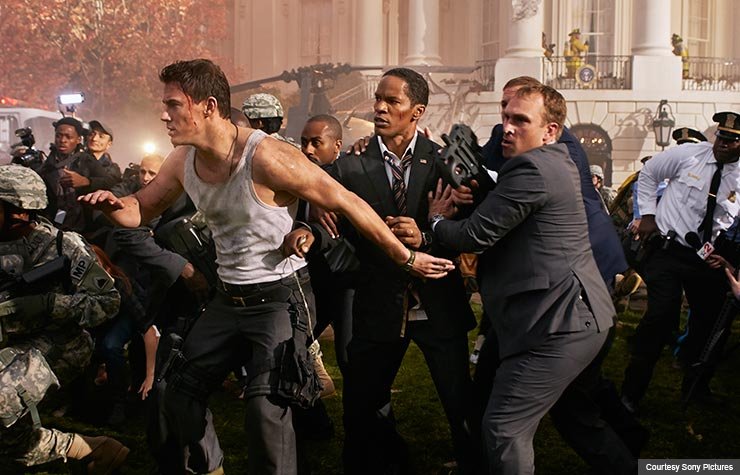 Olympus was good, but not good enough to see twice, so I was not looking forward to spending another two hours-plus watching a resourceful John McClane wannabe — played this time by rising star Channing Tatum — yippee-ki-yay his way to a hero's medal at 1600 Pennsylvania Ave.

Well, imagine my surprise at being totally sucked in by White House Down, which takes longer to get crackin' with the gunplay, but puts the time to good use developing the characters in a way Olympus didn't.

Looking for a movie to rent tonight? Check out our Movies for Grownups reviews from 2013 and years past to see what's worth watching.

As a Capitol policeman who just happens to be in the White House for a job interview when havoc strikes, Tatum is appealingly unsure of himself at the outset. And Jamie Foxx is funny/distinguished as President Barack Obama — er, I mean as President Sawyer (but really, this guy is even trying to beat a cigarette habit).

As a Secret Service bigwig, Maggie Gyllenhaal isn't asked to do much more than restate the plot setups: "Cale, if you don't get to the Oval Office in eight minutes, it'll mean World War III!" And Richard Jenkins and James Woods bring nice gravitas as administration officials who may or may not be scoundrels (trust me, you'll figure that out before the rest of the characters do). 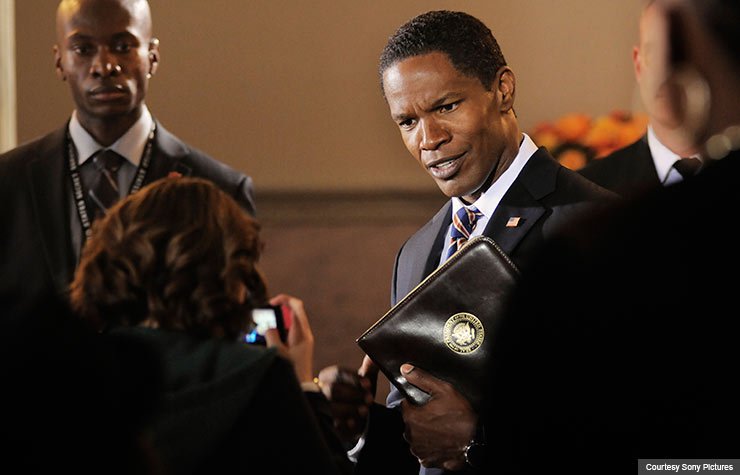 As the requisite kid, Joey King acts suitably in peril, especially in the inevitable scene where the chief bad guy comes to the sudden realization that he has within his evil clutches the daughter of the elusive cop who is picking off his henchmen one by one. It happens, I would swear, to the very corresponding second in Die Hard when Alan Rickman realizes Bruce Willis' wife, Bonnie Bedelia, is one of his hostages.

Recite along with me the next line the hero hears: "I have someone here who has something to say to you!"

Such predictability is, oddly, one of White House Down's appeals. We've been down this debris-littered road so many times before it is, in a way, positively comforting. I mean, you tell me: When the president proudly shows off his vintage Abraham Lincoln pocket watch in an early scene, then theatrically tucks it into the breast pocket over his heart, don't you think maybe that might become important later on? During a gun battle, perhaps?

I'm reminded of the old miracle plays of the Middle Ages: Everyone in town knew every line, every plot point by heart. Yet they flocked to see those plays and remained enthralled by them, year after year.

See the latest AARP contests and sweepstakes for a chance to win great prizes and big money!

In addition to the buddy-movie chemistry, the chief thrills in White House Down come in watching things get broken, notably the White House and Capitol dome.

It just so happened that on the same day I previewed White House Down I attended the opening of a delightful new art exhibit at the Corcoran Gallery in downtown D.C. called "The Alien's Guide to the Ruins of Washington, D.C."

British artist Ellen Harvey imagines future space aliens using Earth — long since devoid of human occupants — as a tourist destination, picking among the crumbled remains of the U.S. capital the same way we wander around Rome's Forum or Athens' Acropolis. She's even printed up a map of D.C.'s "ruins," which is being distributed to tourists at local hotels all summer.

"Seeing D.C. in ruins is nothing new for people today," says Harvey. "They've seen it destroyed over and over again in movies like Independence Day and Olympus Has Fallen. We know what those buildings mean, but in the exhibit the aliens try to interpret them, and they get it all wrong."

White House Down likewise trades on our fascination with destruction. Unlike Harvey's aliens, though, the movie gets an awful lot right.