It's rare that a director puts out a film that critics and viewers will concur is an artistic achievement and, simultaneously, a compelling, easy-to-swallow watch. Baz Luhrmann (of Moulin Rouge! fame) has done it with his version of The Great Gatsby — 3-D viewing glasses and a two-hour-plus run time aside.

See also: Your picks for the greatest movies ever made

Luhrmann made no mistake in casting Leonardo DiCaprio as his larger-than-life Jay Gatsby. DiCaprio masters the role with equal portions of bravado and sensitivity.

Tobey Maguire (he needs to be given more challenging work than what he got in the Spider-Man series), who plays the Fitzgerald-ish writer character Nick Carraway, also brings the perfect innocent sensibility to his character, though portraying the reputed alcohol-sauced side of the author is a stretch for him. 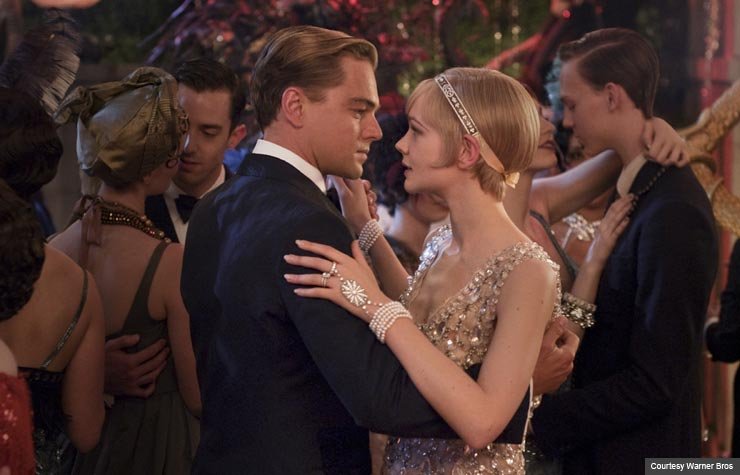 Leonardo DiCaprio as Jay Gatsby and Carey Mulligan as Daisy Buchanan in "The Great Gatsby."

(Like Fitzgerald, Carraway, as narrator, makes some astute observations about American society throughout the film.)

I would have liked to see the slightly more dramatic Michelle Williams or Anne Hathaway in the role of Daisy, partially because Carey Mulligan (who was nominated for an Oscar for her role in An Education) comes off as so dreamily dumb, but maybe that's Luhrmann's point.

The script by Luhrmann and Craig Pearce (also of Moulin Rouge! fame) adheres to the key elements of F. Scott Fitzgerald's inimitable novel, with some appropriate emphasis on the divide between the rich and poor, and, more so, the hypocrisy of the old rich — in the 1920s and today.

Carraway, a Midwestern-born kid, is working in the financial district of Manhattan in 1922, when the city and country are exploding with optimism and wealth. He rents a modest bungalow on the beach in West Egg, where all the newly rich are congregating, across the bay from his cousin, Daisy Buchanan.

Daisy is ensconced in her old-world blue-blood neighborhood with her philandering husband, Tom, and their daughter, who is never introduced. She's unhappy, despite all that's at her fingertips, and not just because she knows her husband's attentions are elsewhere.

Meanwhile, turns out that Jay Gatsby is Carraway's next-door neighbor, and Gatsby has been nursing an abiding desire to get the love of his life, Daisy, back. Carraway, of course, figures prominently, and appropriately, in that scheme, as both a dramatic character, and as a writer whose prose appears at times on-screen as if produced from the keys of an old typewriter.

The secondary characters here are a mixed lot. Daisy's old-money husband Tom, played by Joel Edgerton (who was fabulous in Warrior), is menacing enough, but one wonders why Daisy would have married him, even in the face of Gatsby's failings at that time. Tom's mistress, Myrtle Wilson (Isla Fisher of Wedding Crashers), is actually quite fabulous, while her cuckolded husband George, played by Jason Clarke (very good in Zero Dark Thirty), is a gross cliche.

The production comes together thanks not only to the compelling interplay between DiCaprio and Maguire but because of the eye-popping visuals. Cinematographer Simon Duggan, along with costume designer Catherine Martin (also from Moulin Rouge!) re-create the opulent Big Apple of the 1920s in a fresh, artsy way. I'm not sure that we needed the 3-D glasses to bring this home, but wearing and watching, I wasn't perturbed. Perhaps to drive home the point that then still applies to now, Luhrmann plays time games on screen, showing the Empire State Building when it wasn't yet built, and seeding songs from the likes of Jay-Z and Beyonce in the soundtrack.

Revisit the old classic Great Gatsby and walk away with thoughts about how far we've come, or how little we've changed.