Ben Affleck, Rachel McAdams Romantic Drama 'To the Wonder' Is Less Than Wonderful

Writer-director Terrence Malick's newest film, To the Wonder, is 25 minutes shorter than his 2011 offering, The Tree of Life, and, unlike the earlier picture, it spares us a long, wordless, beginning-of-the-world scene complete with dinosaurs, colliding planets and jellyfish.

For that alone I should give the review one more star, but — full disclosure — I just don't like Malick's film work.

See also: Reviews and trailers at Movies for Grownups on YouTube

It's not that I didn't "get" To the Wonder. In The Tree of Life, Malick seemed to intentionally obfuscate the story, if there was one. Here the plot is relatively simple. The main character, Neil (played by Ben Affleck), an environmental scientist, meets Marina (Olga Kurylenko of Quantum of Solace and Seven Psychopaths), single mother to a 10-year-old daughter, while traveling in Paris. They fall in love — or at least Malick's version of love, which involves lots of hair-twirling and leaping across rooms or through fields of grass — and Neil brings Marina and her daughter home to live with him in a dull suburban neighborhood in Oklahoma.

Soon the couple's intimate connection cools and Marina seeks solace from a fellow refugee, the Catholic priest Father Quintana, played by Javier Bardem. When Marina's visa expires, Neil willingly allows mother and daughter to return to France, leaving him free to reconnect with his old girlfriend, Jane (the ravishing Rachel McAdams of Sherlock Holmes and Midnight in Paris). Alas, months or so later, word reaches Neil that Marina has fallen on hard times. He drops Jane and returns to Paris to fetch Marina, bringing her back to America to settle into the quiet life of desperation that everyone in a Malick film seems to live. 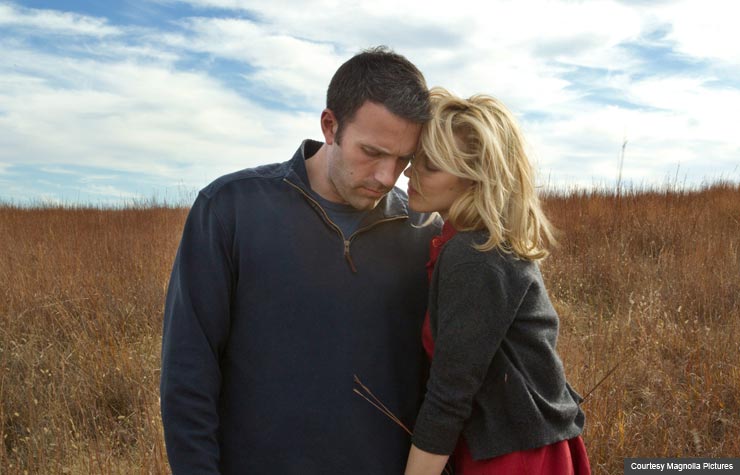 Like The Tree of Life, To the Wonder offers little real dialogue but instead voice-over whispers in English, French and Spanish. The characters interact physically, yet so often the interaction feels like an accidental collision — sometimes graceful, like a car spinning slowly on ice, and other times brutally forceful. It's a dance that all Malick's characters participate in, over and over to the point of redundancy, and, for me, a mere suggestion of real, human interpersonal relations.

The people who populate Malick's films seem to lack conscious intention, and yet we're supposed to believe his works of art should speak to us about important matters such as love, faith and responsibility?

OK, Malick's camera finds beauty, from the cloisters of Mont St. Michel, where Neil and Marina wander in the early days of their romance, to the horse corrals on Jane's ranch. But enough already with the undulating acres of hay, the morphing clouds across the sky, the shifting of light to dark. What does it all mean? As I learned years ago, thanks to a merciless though smart college writing professor, masquerading pretension as art is easy enough to do, but the hard work starts with telling a story.

What we love and hate as the year unfolds.