En español |  It’s thrilling to be part of this wonderful country, this melting pot, and being Latina — well, consider me spice in the stew. This is America, the USA, my country, warts and all, and still the best country in the world. From Puerto Rico, Cuba or anywhere else in Latin America, Hispanics are woven into the fabric of this nation. Our food, family values, music and passion are threads in its tapestry.

When I was 5, my mother brought me with her to New York City from Puerto Rico. The culture shock is still etched in my 86-year-old mind. The language, the snow — I had never seen snow — the racism, even among children, the name-calling. Suddenly, I was “different”! I had never been different. It was sink or swim, build character or give up. Thankfully, I had the model of my mommy’s grit.  Never give in, never quit, keep on moving. That was my mom, and that’s me.

Since its very genesis, this country has been an incubator for dreamers, especially hopeful immigrants. As far back as I can remember, I wanted to be a performer, to make it in show business. And when I was cast as Anita in the 1961 film version of West Side Story — a major production — I knew the American dream could happen for people like me.

I’m certain the success of West Side Story meant something very different to Latinos than it did to the broader community. With greater exposure to that Latin-influenced musical, the larger community had the chance to hear our great music, experience our enormous enthusiasm and see us as a people whose love is deep and passionate. My community, on the other hand, was absolutely jolted to learn we were finally being represented on the big screen.

The comedian Liz Torres shared a wonderful story about the night I won the Oscar for playing Anita. At the time, Liz lived in the Hispanic ghetto, in el barrio. It was very hot so all the windows were open; you could hear the televisions from every apartment in the area. She said that when my name was read as a nominee, there was silence, and when I was announced as the winner, everybody started yelling out the window, “Se la comió, my God — she made it. She did it.” You know, what I think they were really saying is, “We did it.” As she shared that story, I started to cry, because it meant so much to me — that I meant so much to them. And that love affair continues. Wherever I go, people still call out to me in a Puerto Rican accent, “I like to be in America.”

Who could imagine that even after I won the Oscar, those who could employ me would continue to cast me as a Spanish spitfire. I was still only offered those dusky maiden roles. I decided that I would never do one of those roles again: “Ha ha, I’ll show them!” But they showed me — I didn’t do a film for seven years after West Side Story. It broke my heart. I couldn’t understand it. I still don’t understand. And there you have it, Hollywood’s mind-set at the time.

Frankly, roles for Latinos haven’t changed enough in Hollywood. We are vastly underrepresented. Not only us; when was the last time you saw an Asian in a major role? I’m grateful for the example of the black community, who’ve learned to better navigate the system and make it more inclusive. 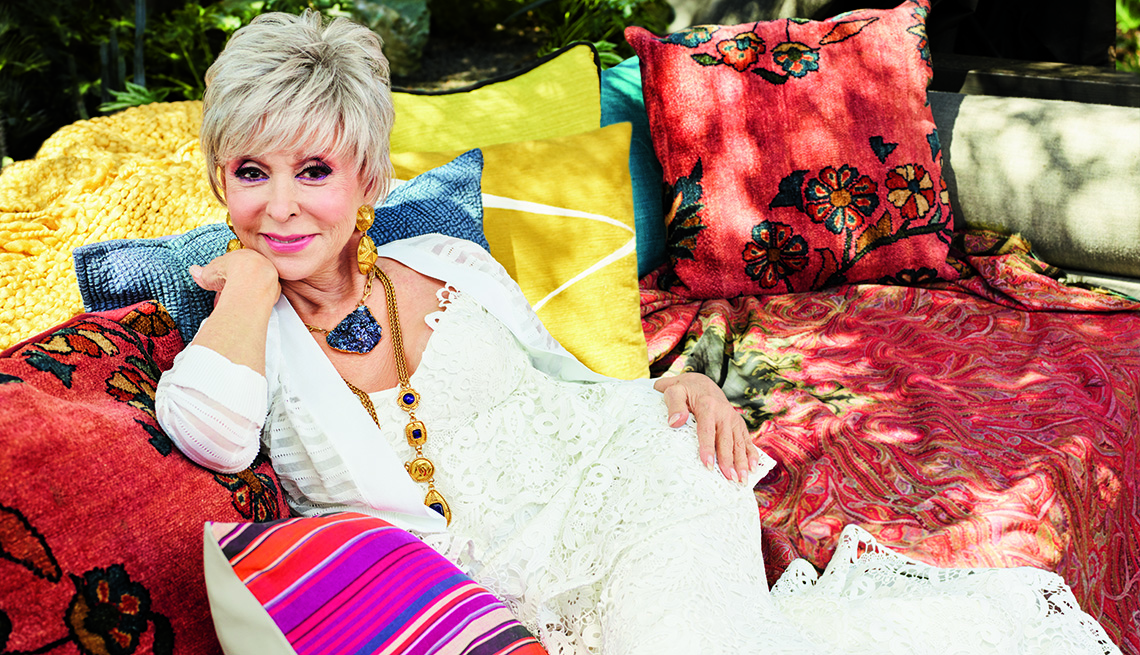 Over the years, Rita Moreno has won an Emmy, a Grammy, an Oscar and a Tony.

I’m having the time of my life. Life is unbelievably fine. Right now we’re filming the third season of One Day at a Time, the marvelous Netflix sitcom and reboot of Norman Lear’s original. I have an album in Spanish called Una Vez Más — by the way, produced by Emilio Estefan.

I’ve written a book about my life, Rita Moreno: A Memoir, both in Spanish and English, and it’s narrated by me on the audiobook. I’m so ridiculously happy, it’s disgusting. I wake up humming. I’m so spoiled; I expect wonderful things to happen. That’s my outlook, and it’s a good one. It seems odd — it’s as though I’ve needed to get older to have more success.

The United States is still a land for dreamers. I pray it will always welcome people from all over the world and that our diversity will increase. More spice in the stew!