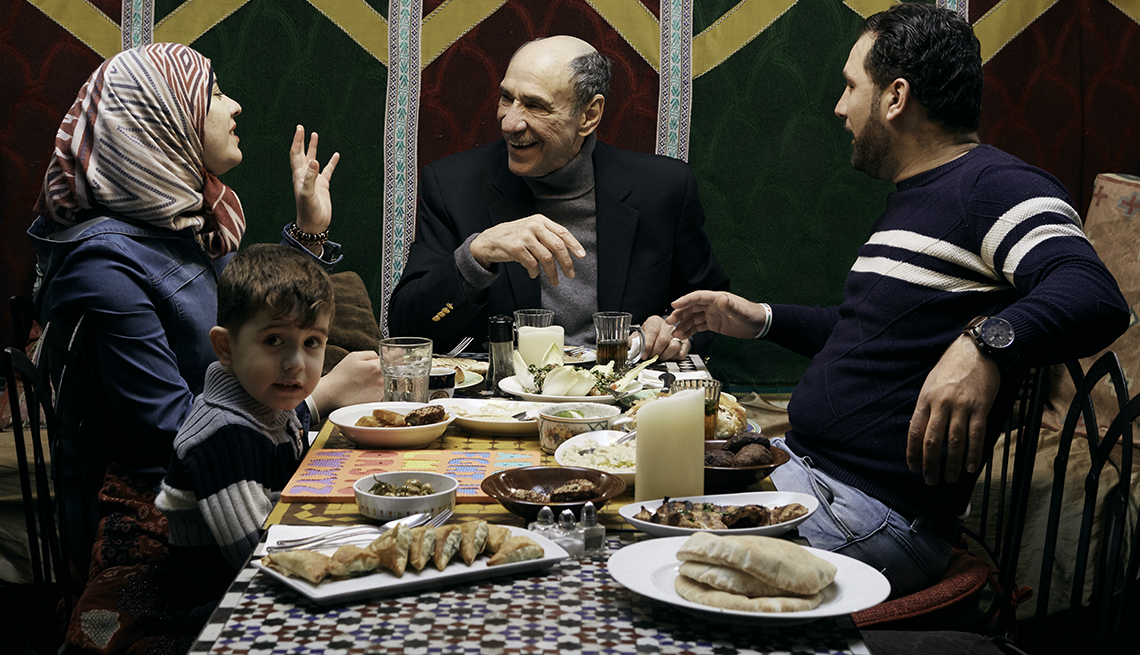 F. Murray Abraham at a New York cafe with Waheed and Ghena Safour, and their son, one of the Syrian refugee families that his organization sponsored.

My father's parents came to America in the 1920s because there was a famine in Syria. America saved their lives — it’s as simple as that. They never forgot that, and my father taught us to be superpatriots. My two brothers are buried in a military cemetery in Texas.

I love my work. It’s the source of my energy; I’m looking at 80 but feel like I’m 40. But I’m constantly balancing my good fortune against the darkness I see in my grandparents’ war-torn homeland. I have relatives there who have lost their homes and are scattered. Some have been fortunate enough to make it out of Syria. We’d like to bring them to America because we have places with family where they can stay. But that’s so difficult that we are focusing on helping them reach some other safe haven instead. And they’re the lucky ones. Millions can’t get out.

So when the opportunity arose to bring attention and aid to this tragedy, I leaped at it. I became a spokesperson for the Multifaith Alliance for Syrian Refugees, a network of more than 90 organizations coordinating aid for people within Syria who have been displaced. The alliance has helped deliver over $114 million in food, clothing and medical relief by working through many religious groups. Georgette Bennett, who dreamed up the alliance, is the child of Holocaust survivors. I’m Syrian Christian. Buddhist, Hindu, Muslim and Sikh organizations are also involved.

My grandfather Murai had a favorite parable: A sparrow heard that the sky was falling and lay down on his back. Along came one of the king’s horsemen. He said, “What are you doing?” The sparrow said, “I heard the sky is falling, and I’m holding it up.” The horseman was amused: “Do you really think you can hold up the sky with those little legs?” And the sparrow said, “We do what we can.”

When people volunteer to help, it means so much. It’s a way of saying you’re not helpless; you can change the world for the better. There is meaning in even the smallest action.

Provides funding and expertise to local nonprofits after disasters; arcrelief.org

— As told to Gene Santoro

F. Murray Abraham, 78, is featured in the upcoming film How to Train Your Dragon: The Hidden World.