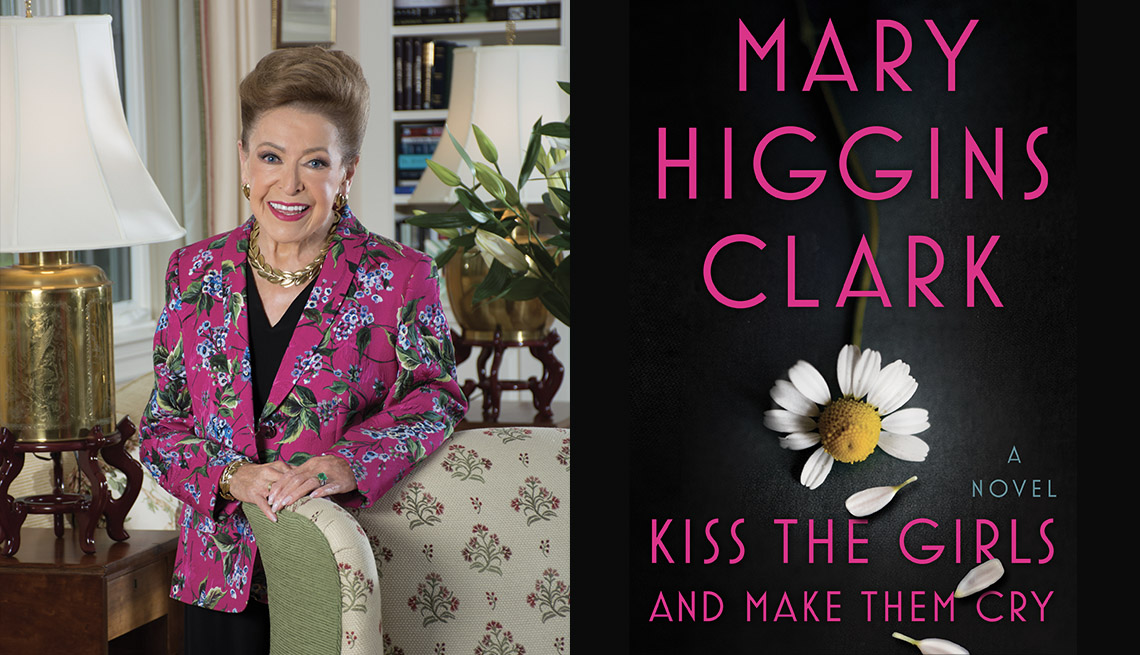 The author of more than 40 novels, Mary Higgins Clark has been writing best-selling mysteries for nearly half a century, with more than 100 million copies sold in the U.S. alone. At age 91 (she turns 92 next month), Higgins Clark is still the Queen of Suspense. Her new book is Kiss the Girls and Make Them Cry — a mix of murder and the #MeToo movement in a fast-paced tale about a female journalist investigating what really goes on behind closed doors at a TV news network.

We talked to the author about her new book, career and family, and why she'll never stop writing.

What inspired you to address sexual abuse in Kiss the Girls?

I didn't set out to write a novel about sexual abuse, even though that is at the core of the story. What intrigued me was the lengths that people or companies will go to try to cover up a scandal in their midst. Who are the people who would do that? How would they go about it? If giving victims money to maintain their silence wasn't enough, would they take even more drastic action, including murder, to contain the scandal? It had all the elements of a good story.

As a young woman, you worked at the Remington Rand typewriter company, where you also modeled in catalogs with Grace Kelly. Later you were a Pan Am flight attendant. Did you ever experience sexual harassment?

Honestly, I never did. I guess I was very fortunate. Nothing happened during my Pan Am days. When I worked for years in a radio advertising agency, the absentee owner was a tyrant. He treated all the employees, male and female, badly. A partner and I left the firm, started our own shop and eventually put him out of business. And since the mid 1970s, my “boss” has been my publisher, Simon & Schuster, and they've been wonderful.

It's also a very up-to-date 2019 novel — texting, Ubers, video game addiction, sexual harassment. How do you keep current as you get older?

It's not easy! I'm blessed to have my children, grandchildren and two great-grandchildren around. Listening to what's going on in their lives keeps me current. And there's nothing wrong with asking for advice when writing about an unfamiliar topic. In one scene in Kiss the Girls, a lawyer is trying to intimidate one of the female victims who is in her late 20s. He had illicitly gotten hold of her accounts on two dating websites. I showed the chapter to my granddaughter, who's in her mid-30s. “Nobody in her 20s uses that site anymore!” was her response. She switched me over to more popular sites for that age group.

How do you collaborate with best-selling author Alafair Burke on the Under Suspicion series (including All Dressed in White and You Don't Own Me)?

Typically, we spend a day together sketching out a detailed plot for the new book. Alafair then gets to work on the draft. She submits pages to me, and I edit to assure that the story is being told in my voice as a writer. We're now working on Piece of My Heart. It's a joy working with Alafair. She's a terrific writer. At the risk of being immodest, when we combine our talents, the result is a very good read!

Do you still collaborate with your daughter Carol Higgins Clark, and what is/was that like?

We had fun when we wrote together. Our goal, and I hope we achieved it, was to inject an element of humor into the suspense stories. With Carol spending most of her time on the West Coast, we no longer write together.

Are you surprised that two of your five children became judges?

I'm not surprised. I'm delighted! My daughter is a superior court judge and has been on the bench for over 30 years. My son, in addition to being a private practice attorney, is a municipal court judge in three local towns. Needless to say, if in one of my stories I'm wrangling with a legal question, I don't have to go very far for advice.

Where the Crawdads Sing [by Delia Owens] is a beautifully written story with a very atypical main character. It's a great read all the way to its wonderfully satisfying conclusion. Passing, by Michael Korda, is a tribute to his late wife, Margaret. It's deeply satisfying if you're looking for a great love story.

What keeps you writing?

If I didn't write, what else would I do? I enjoy reading the newspapers in the morning, and I love having a glass of wine while watching Judge Judy in the late afternoon. But that still leaves a big chunk of the day unspoken for. I can't imagine what I would do if I didn't write. I hope I never find out.