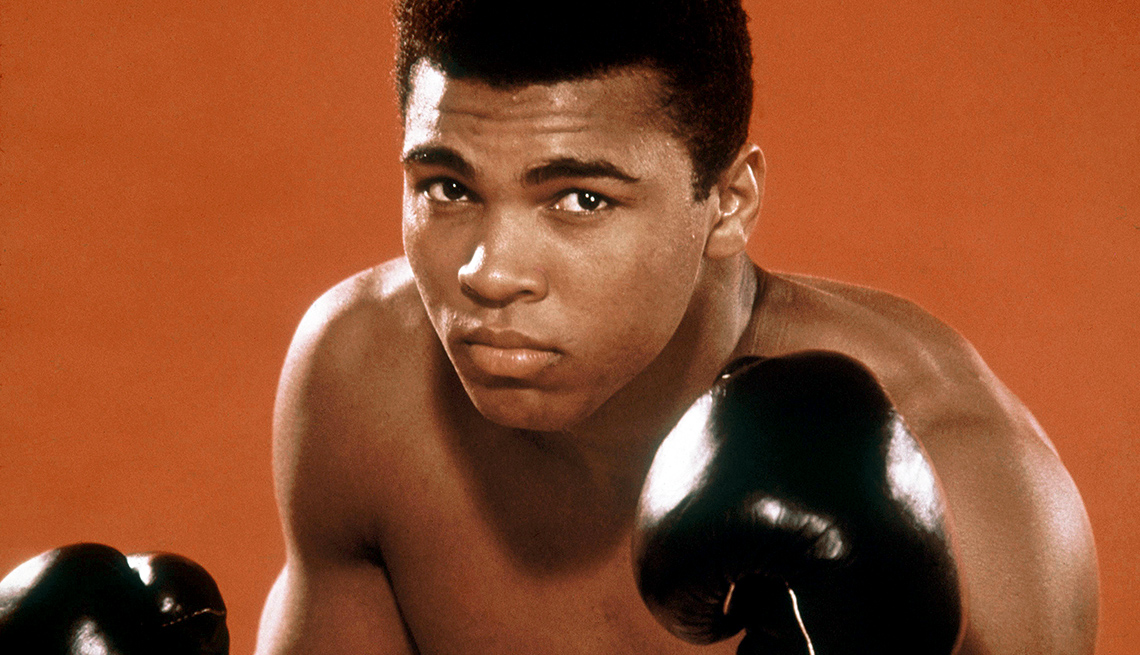 Muhammad Ali, previously known as Cassius Clay, posed for a photo shoot in 1966.

For much of his life, Muhammad Ali lived on the front page of newspapers around the world. Handsome and outspoken, Sports Illustrated’s Sportsman of the 20th Century enraged and enchanted people for decades.

Now, 16 months after Ali’s death, Jonathan Eig’s new 623-page biography is being hailed as the first book to dive deep enough into the life of this unique man — boxer, Olympian, world heavyweight champion, black activist, Muslim, beloved icon — to capture so much of his complexity.

Among the most interesting bits from Ali: A Life:

Ali's talent may relate to his dyslexia. Eig writes that the Louisville, Ky., teenager then known as Cassius Marcellus Clay Jr. was probably dyslexic, and the reading disorder could have given him an advantage in the ring because he’d developed an ability to read visual cues faster. The author adds, “It may be why Cassius Clay had a gift for anticipating a punch and backing or sliding out of its way.”

He had an ambivalent, complicated relationship with Malcolm X. Ali became close to fellow Muslim Malcolm X, his friend and mentor, until he split with the activist to follow Nation of Islam leader Elijah Muhammad shortly before Malcolm’s murder in 1965. “Decades later, Ali would say that turning his back on Malcolm was one of the biggest regrets of his life,” Eig writes. This photo of Muhammad Ali appears on the cover of Jonathan Eig’s book, "Ali: A Life."

There was very early evidence he had suffered serious brain damage. Ali, who would eventually battle Parkinson’s syndrome, was 35 when he beat Earnie Shavers on Sept. 29, 1977. Although Ali won, his ring doctor Ferdie Pacheco resigned and asked the New York State Athletic Commission to pull Ali’s boxing license for the sake of his declining health (including his failing kidneys). Eig quotes Pacheco: Ali “didn’t think he was brain damaged. He didn’t remember things. He was stuttering and stammering…. I couldn’t stop him. I tried.” The biographer notes that Ali took “somewhere around 200,000 blows to the head and body” in his boxing career.

His true love was first wife Sonji Roi. According to Ali’s brother, Rahaman Ali, the greatest ordeal of his brother’s life was not Parkinson’s or losing boxing bouts or his legal troubles when he refused induction into the U.S. military during the Vietnam War, declaring himself a conscientious objector. A bigger hardship was his breakup with his first wife, a beautiful dancer, model and barmaid who was not a Muslim. Roi’s refusal to dress in a modest Muslim manner enraged Ali and ended the marriage. “He went through hell,” his brother told Eig. “She’s the only one he ever really loved. His true love, his only one.” (Ali had four wives and many, many liaisons).

How he influenced the movie Rocky. In 1975, Ali fought a journeyman white boxer named Chuck Wepner, known as the Bayonne Bleeder for his unfortunate tendency to gush blood when hit in the face. According to Eig, the Ali-Wepner fight would inspire Sylvester Stallone to write a screenplay about a working-class boxer who “goes the distance” with the reigning heavyweight champion. Rocky would win the Best Picture Oscar in 1977.