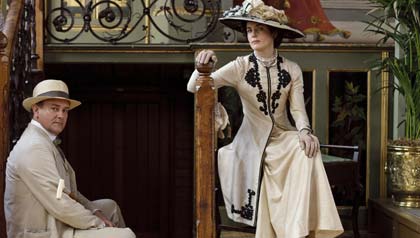 Are you suffering from Downton Abbey withdrawal? Symptoms include:

To cope with this debilitating condition until the drama returns to PBS in January 2013, settle into one of these alternatives: shows, movies and books that are similar to Downton in one way or another. And who knows? One of them may spark an entirely new obsession.

Upstairs Downstairs (1971-1975). Lovers of Downton Abbey's rich production values won't find the same quality here, but the plotlines are addictive: Each episode juxtaposes the dramas of the aristocratic Bellamys and their servants "below stairs" during a tumultuous time in England (the early 1900s through 1930).
Watch: Season 1 is free on Amazon Instant Viewing for Prime members; later episodes can be rented for $1.99 each, later seasons (2 through 5) for $24.99 each. Netflix members can watch Seasons 1 through 5.

Upstairs Downstairs (2010). This lavish continuation of the original series picks up the story in 1936, when a young couple of means moves into the abandoned Bellamy manse, eager to redecorate and staff up. Rose Buck (Jean Marsh), the parlormaid in the original series, is back, but now she's running the show downstairs. Places, everyone!
Watch: Season 1 on Amazon Instant Viewing for $1.99 per episode. Season 2 returns to PBS in October.

Miss Marple (1984-1992) and Agatha Christie's Marple (2004-2010) on PBS. Dame Agatha Christie's spinster sleuth unravels murders in the not-so-quiet English countryside. Not a mystery fan? All the motivation you need to watch these installments comes from the masterly performances by three veteran actresses: Geraldine McEwan, Julia McKenzie and Joan Hickson.

Brideshead Revisited (1981 TV miniseries, based on the 1945 novel by Evelyn Waugh)."The best series ever seen on American television," as the Washington Post hailed it, depicts the fading glory of aristocratic England between the world wars. An artist (Jeremy Irons in his breakout role) befriends the spoiled second son of a titled family and gets involved with their dysfunctional lives. Until Downton Abbey came along, this was the most popular British series ever to hop the Atlantic.
Watch: Amazon Instant Video, $2.99 per episode (11 episodes total) or $25.99 for entire season.

Gosford Park. A pair of British socialites invite a clutch of outspoken characters to their country manor for the weekend. What could possibly go wrong? Murder, for starters — and everyone's a suspect. Robert Altman directed a troupe of stars young and old, among them Clive Owen, Helen Mirren, Michael "Dumbledore" Gambon and — in a very Lady Violet-like turn — the incomparable Maggie Smith. Downton Abbey creator Julian Fellowes wrote the script of this engrossingly funny whodunit and class satire.
Watch: Amazon Instant Video, Netflix.

Next: Words, words, words. Get your fix with a book. »

To Marry an English Lord: Tales of Wealth and Marriage, Sex and Snobbery by Gail MacColl and Carol McD. Wallace ($8.77-$15.95). Speaking of our jolly good Fellowes, he created Lady Cora Crawley (Downton Abbey's Countess of Grantham) after reading this book about American girls coming to England, from about 1880 to 1914, to marry into the British aristocracy. The upper crust was hurting — estate shingles falling on their heads — and title-seeking American heiresses had just the bucks to heal them.

Maisie Dobbs series by Jacqueline Winspear (Elegy for Eddie $12.99-$25.99). It's 1929 when this mystery series begins, and plucky investigator Maisie Dobbs has just opened her own London detective agency. Cambridge-educated but working class in origin, Maisie solves cases thanks to her intuition, guts and ease at navigating England's postwar social classes. Elegy for Eddie, published this year, is the ninth Maisie novel from the English-born Winspear, whose skill at evoking postwar England will make you crave a nice hot cuppa.

The Chaperone by Laura Moriarty ($12.99-$26.95). Elizabeth McGovern — Cora Crawley on Downton Abbey — was so moved by this novel while recording its audio version that she optioned the film rights. Now McGovern plans to star as the title character, Cora Carlisle, who lands the unenviable task of chaperoning 15-year-old future silent-film star Louise Brooks through the New York City summer of 1922. The Chaperone explores how different generations of women dealt with cultural overhaul — everything from rising power to rising hemlines — in the early 20th-century United States.

The Uninvited Guests by Sadie Jones ($11.99-$24.99). It's a dark and stormy night in 1912 when a group of shocked train-wreck survivors take refuge in a manor house in northern England, where a tony birthday dinner is about to unfold. From the estate's narcissistic aristocrats and eccentric guests to its cranky servants and unexpected arrivals, no one is who or what he or she seems. We'll leave it to you to decide whether this speedy read is a mystery, a morality play, a ghost story or a comedy of errors.

You may also like: 50 Shades of Grey and 5 more summer reads.