Bill Cosby's birthday has spiraled out of control. "I'm not in charge of these things anymore," deadpans the actor, who turns 75 on July 12 and recently published his 12th book, I Didn't Ask to Be Born (But I'm Glad I Was). "When you're married and have children, people use birthdays as a time to boss you around."

Cosby isn't exactly broken up by this turn of events. "I never had a birthday party growing up," he recalls, "because we never had any money." He expects to be banished to his bedroom until dinnertime this year, with instructions from his four kids on what to be wearing when he emerges.

What's on the table when he gets downstairs, however, will definitely be at his direction. Cosby gave up fried food and barbecue eight months ago, lowering his cholesterol to normal. Now an avid juicer with a taste for blends made from collard greens, garlic and ginger, he lives by the mantra: "I ate my way into this, and I'm going to eat my way out of it."

Bill Cosby recently sat down with AARP to describe the view from the three-quarter-century mark.

Q: Is there one birthday you remember in particular?

A: Yeah, my 11th — but not because it was the best. My mother said, "Why don't you go see your Uncle William [her brother] and tell him it's your birthday?" We had no phone — and didn't till I turned 14 — so I walked the 53 blocks from 10th and Parrish in Philadelphia to 57th and Haverford.

When I got to Uncle William's address, all the shades were down to keep the house cool. So I rang the bell and this dude opens the door and I say, "Uncle William?"

"She asked me to come by and say it's my birthday." 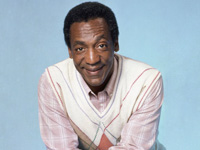 Funnyman Bill Cosby is still getting laughs after 50 years as an entertainer.

I'm waiting for him to say "Happy birthday," so I say something like "I'm happy to come and see you." Then it gets real quiet and we sit there in silence for I don't know how long. Finally I can't take it any more: "Well, Uncle William, I guess I'll be going."

And he says, "Well, take care of yourself, Billy."

I get to the door and I say, "Uncle William, could you give me carfare so I can ride home?"

I couldn't believe it, but I knew he wasn't lying. So I got brave enough to say, "You got any soda bottles?" (You could get a nickel back for each large bottle.)

And Uncle William says, "I don't have a one."

By now I'd had enough, so I go in his kitchen and sure enough there's nothing there. So I left and walked the 53 blocks home in the 90-degree heat.

When I got back, Mom asked me, "How's Uncle William?"

Q: What's going through your mind as you approach this milestone?

A: I look at it as a celebration of previous years. For some reason I keep thinking back to the year [1961] I got out of the Navy. I was 23 and they gave me a job at the post office, and after working 10 days I got a check for something like $300. I'd never seen that much money in my life. I went home and gave Mom all but $50. Then I went downtown and paid $35 for a pair of Flagg Brothers' Scotch Grain mahogany saddle shoes. I loved those shoes — and I still have 'em!

Q: You've overhauled your diet — do you have a new favorite food?

Recently I went to a place in Kansas City called Gates Bar-B-Q, and I didn't have a single rib. Instead I had cauliflower, broccoli and eggplant, all roasted over the barbecue. Then Mrs. Gates goes out and she comes back with a skinless chicken for me. Nothing on it, no salt — succulent! In place of peach cobbler at the end, I ate a clementine — but I had to insist that Mrs. Gates let me peel it myself!

Lorenzo Benet, formerly an assistant editor at People magazine, is a writer based in L.A. His books include The Lives of Danielle Steel and Trailblazer: An Intimate Biography of Sarah Palin.

You may also like: Raquel Welch is 70-plus and aging beautifully.