More workers are getting inoculated, and others are losing their jobs 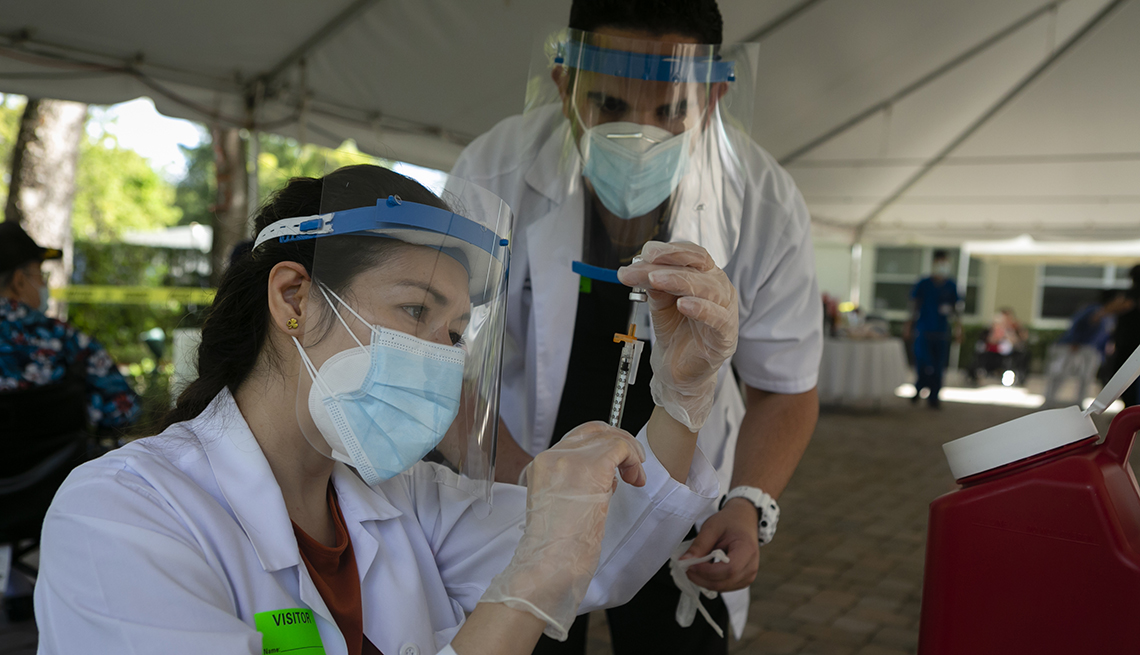 Aegis Living, a long-term care provider operating 33 assisted living, memory care and respite care communities in the western U.S., launched a COVID-19 vaccine education campaign in September, before the vaccines were even available.

A vaccines researcher described how the shots are made, tested and authorized on a company-wide call for Aegis’ 2,200 residents and 2,500 workers. An Aegis employee and her family, who all contracted COVID-19 last year, joined another call to share their struggles. Residents and staff not yet convinced could get one-on-one sessions with a medical expert.

"You just have to meet people where they are in their hesitations,” says Dwayne J. Clark, founder and CEO of Aegis. “We're asking them to put a foreign substance in their body. It's a big deal.”

When COVID vaccines became available at year's end, Aegis enrolled in a federal program that brought on-site vaccinations to virtually all the country's nursing homes and assisted living facilities. By the end of March, all Aegis communities had hosted three rounds of vaccinations, with 95 percent of residents participating, mirroring a national trend of high resident uptake. Nearly 90 percent of Aegis staff also opted in — much higher than the national staff uptake rate, which was roughly 50 percent at the time.

In April, as vaccine supply increased and everyone 16 and over became eligible for the shots, management announced that vaccinations for workers would be required — only those with a valid medical or religious reason were exempt. Since then, around 70 more workers have opted in, with more expected in the next month.

But some workers are still resistant. Clark is expecting to terminate 100 workers after the July 1 deadline for vaccinations: “We know we're going to lose some really good people.”

Across the country, a growing number of long-term care providers have started requiring COVID-19 vaccination for workers, citing low vaccine uptake rates, increased supply, more data supporting the safety and efficacy of the shots, and the continuing threat of the coronavirus as it evolves. Many more providers are mulling such mandates.

"There is more interest in exploring the possibility,” says Ruth Katz, senior vice president of policy at LeadingAge, a national association representing 5,000 nonprofit aging services providers. In January, only a handful of member providers were making COVID-19 vaccines a condition of employment, she says. “Now, when we have a member talk about mandating, all ears are open.”

But adopting a mandate is hardly an easy choice. Losing staff is a worry, and the industry already suffers from serious staffing shortages. Then there's the threat of litigation, given that COVID-19 vaccines are still only under emergency use authorization (EUA) by the U.S. Food and Drug Administration (FDA). And some worker advocates question whether it's fair to mandate among a workforce that commonly experiences low pay and scant benefits, has been disproportionately affected by COVID-19, and is disproportionately made up of Black workers, who are more vaccine-wary than other Americans.

"The question isn't whether or not vaccine mandates work — they do,” says Rachel Gur-Arie, a scholar at Johns Hopkins University and the University of Oxford who studies infectious diseases and ethics. The question, she says, is “At what price?”

COVID-19 devastated America's long-term care community, including nursing homes, assisted living facilities and other senior care settings, killing more than 180,000 residents and infecting more than 1.4 million, according to the Kaiser Family Foundation. The virus is prone to spread in long-term care facilities, which account for almost a third of all U.S. coronavirus fatalities, due to required contact between staff and residents and close living quarters for residents who are often immunocompromised.

To Clark, the turnaround justifies the decision to mandate vaccinations for workers. “We have 200 people that are angry at us, but I'll take that anger versus the loss of a resident's life,” he says. “The reward of saving lives and not going through this again is incredible."

Other long-term care operators feel the same and imposed vaccine mandates even earlier. Juniper Communities, which operates 22 facilities in Colorado, New Jersey, Pennsylvania and Texas, announced its mandate around the new year. Atria Senior Living, a chain operating more than 200 long-term care communities across America and Canada, did so in January. Silverado, a memory care provider operating 22 facilities across six states, followed in February. When their deadlines rolled around, all three companies reported staff uptake rates of 95 percent or more.

Nursing home staff have a right to make decisions about their own health, but they don't have a right to expose vulnerable residents to a potentially deadly infectious disease..

"It is gaining considerable traction,” says Lawrence Gostin, a professor of health law at Georgetown University and director of the World Health Organization Collaborating Center for National & Global Health Law. And it should, he says.

Helping fuel the trend is recent guidance from the U.S. Equal Employment Opportunity Commission (EEOC) that suggests employers have the legal right to require employees to show proof of vaccination, as long as they allow for medical or religious exemptions. Gostin says the EUA status of the vaccines doesn't matter: “I foresee legal challenges because the U.S. is so litigious, but I do not believe they will be successful.”

The challenges are already rolling in. And roughly 40 states have seen bills introduced that would override the EEOC's ruling and prohibit employers from requiring COVID-19 vaccinations as a condition of work, according to the National Academy for State Health Policy. Arkansas and Montana have adopted them as law.

There's no official national count of how many long-term care staff members are vaccinated, but surveys suggest it's just over half of the long-term care workforce. That rate lags behind other frontline health care workers, such as those in hospitals and doctors’ offices, according to the Kaiser Family Foundation and The Washington Post.

Still, many operators are reluctant to introduce mandates. CLC & Cappella Living Solutions, a long-term care provider operating more than 20 communities across Colorado, Indiana, Ohio, Oklahoma, Texas and Utah, has been discouraged by insurance companies from mandating vaccines before they're fully approved by the FDA.

Staffing shortages, a long-standing issue within the long-term care industry, have been exacerbated by the pandemic, with at least 20 percent of nursing homes nationwide reporting a shortage of nurses or aides every month since May 2020, according to an AARP analysis of government data.

"We could lose people and we might not be able to replace them,” says Jill Vitale-Aussem, president and CEO of CLC & Cappella, where 73 percent of staff members have been vaccinated. “If we had a market of all these people that wanted to come work in all of our communities, it'd be a lot easier to mandate, but to put the residents at risk of not having people that care for them — that's something we think about all the time.”

Among the 33 percent of workers still unvaccinated at Asbury's eight communities in Maryland, Pennsylvania and Tennessee, many are women under 40 who are concerned about what effects the shots might have on their fertility. Experts say there's no evidence the COVID vaccines affect fertility, but there's limited research on the issue. To combat fears, Asbury has brought in medical experts, circulated myths-versus-facts sheets and hosted one-on-one and small-group sessions to discuss the issue with staff, but many remain hesitant.

"That [demographic] is 30 percent of our workforce,” says Doug Leidig, president and CEO of Asbury Communities, “and it's a significant issue on their minds, so we're respecting that.”

"If we mandate it,” he says, “people may say, ‘Well, I'll go work for the hospital or the retirement community across town that's not mandating it.'” 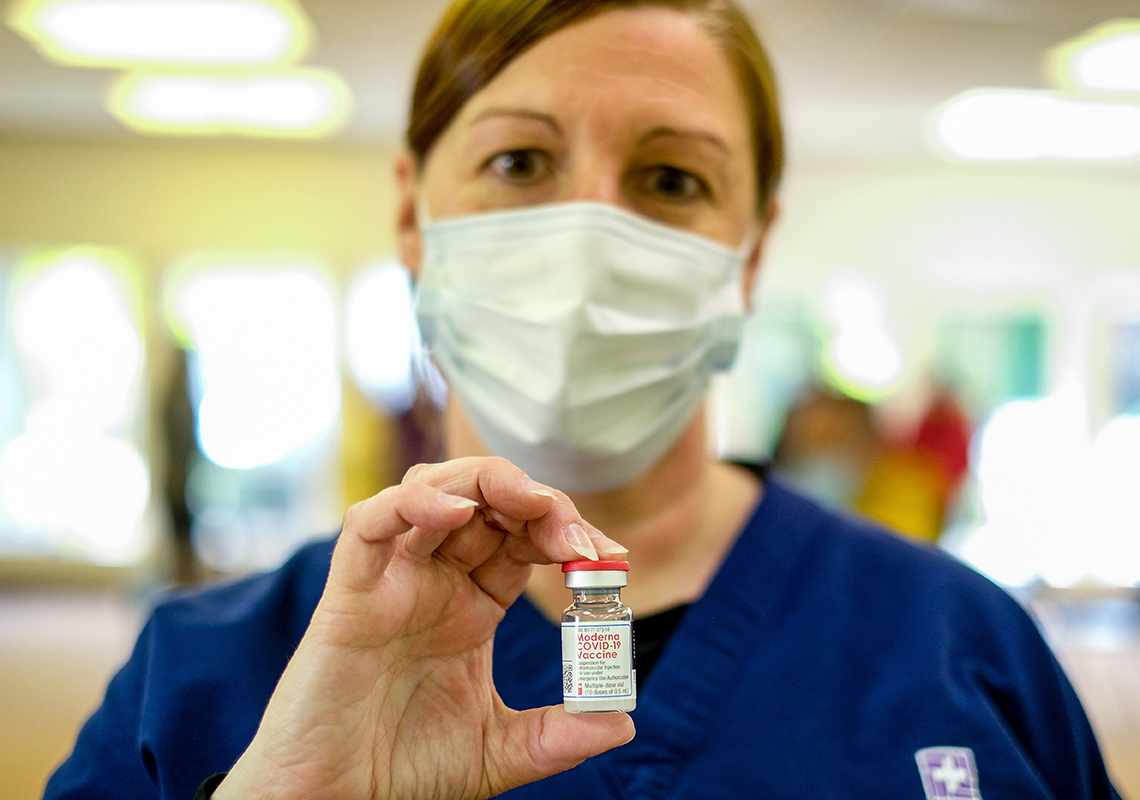 For now, both CLC & Cappella and Asbury are sticking to strongly encouraging vaccinations, as they watch what other health care operators do. “We just want to play along with the larger group and really watch the health experts,” Leidig says.

Michael Wasserman, M.D., a geriatrician and past president of the California Association of Long Term Care Medicine — which represents doctors, nurses, pharmacists and others in the industry — long fought against such mandates. “Three words I've continuously used for months is respecting, honoring and valuing the frontline staff [of the pandemic], and in doing so, not coercing or requiring them to be vaccinated against their will,” he says.

But recent events changed his mind. An unvaccinated health care worker is believed to have been at the center of a March COVID-19 outbreak in a Kentucky nursing home where nearly 50 people were infected, including 18 fully vaccinated residents. Three residents — including one who was vaccinated — died.

And while deaths from the virus have declined sharply this year, almost 900 residents still lost their lives to COVID-19 from mid-March to mid-April, AARP's analysis shows.

And the virus continues to mutate, presenting an ongoing risk. “If we required all nursing home staff to be vaccinated, we would save a finite number of resident and staff lives,” Wasserman says. “I'm just not sure how to ignore that.”

'From nobodies to everybodies'

Mandates aren't the only tool long-term care facilities are using to up staff vaccinations. A national campaign by LeadingAge and the American Health Care Association and National Center for Assisted Living (AHCA/NCAL), which represents more than 14,000 nursing homes and long-term care facilities, has set a goal of vaccinating 75 percent of the nation's nursing home workers by June 30. Facilities are enlisting vaccinated workers, or “vaccine ambassadors,” to provide one-on-one education to hesitant staff. And some facilities are offering incentives, from bonuses to extra time off and discounted health insurance.

The Centers for Medicare & Medicaid Services, which regulates America's 15,000-plus nursing homes, recently announced that all nursing homes will be required to offer and educate all residents and staff on COVID-19 vaccines, as well as publicly report vaccination rates.

But it's hard to overcome the mistrust that many long-term care workers feel toward their employers, says Lori Porter, cofounder and CEO of the National Association of Health Care Assistants.

Certified nursing assistants (CNAs) make up the largest group of employees working in health care facilities, providing more than 90 percent of the direct patient care, according to the association. Most make just $13 per hour, and many don't receive sick leave or benefits. Many work at multiple facilities to make ends meet. In doing so, some were villainized for unknowingly spreading COVID-19 to residents, even as other frontline health care workers were lauded for heroic work. CNAs in nursing homes had one of the deadliest jobs of 2020.

"CNAs went from nobodies to everybodies for the first time ever when everybody wanted them to take the vaccines,” Porter says. Starting late last year, nursing home staff were prioritized alongside residents and other health care workers as the nation's first vaccine recipients. But many staff question the motivation behind their prioritization.

Enforcing a mandate may only deepen that mistrust, warns Gur-Arie of Johns Hopkins and Oxford. “If your workforce feels completely abandoned by you as an employer and has lost all trust in you as an employer, that ultimately can lead to negative health outcomes,” she says. “And not only for the patients that they're serving in these facilities, but also for the workers themselves."

Mike Wasserman sits on the board of AARP charitable affiliate Wish of a Lifetime.