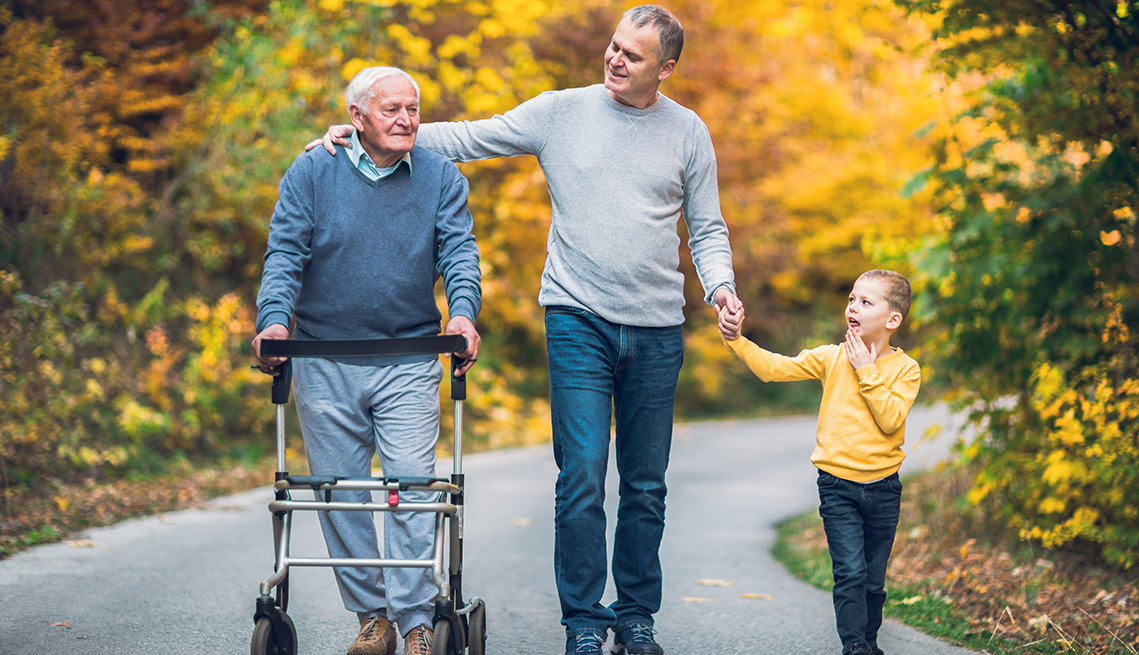 En español | More than 1 in 5 adults — a total of 53 million adult Americans — are now unpaid family caregivers, according to a new report from AARP and the National Alliance for Caregiving (NAC).

The number of caregivers has climbed from 18 percent of adults in 2015 to more than 21 percent in 2020, an increase of 9.5 million adults who provide assistance on everything from grocery shopping to wound care to medication management. The biggest boost came among those caring for adults 50 and older, which accounted for just over 14 percent of caregivers in 2015 and nearly 17 percent this year. Many receiving care were boomers, who are now ages 55 to 75, according to the report.

In fact, boomers are pivoting from taking care of friends and loved ones to needing care. Now their children and grandchildren are stepping up. 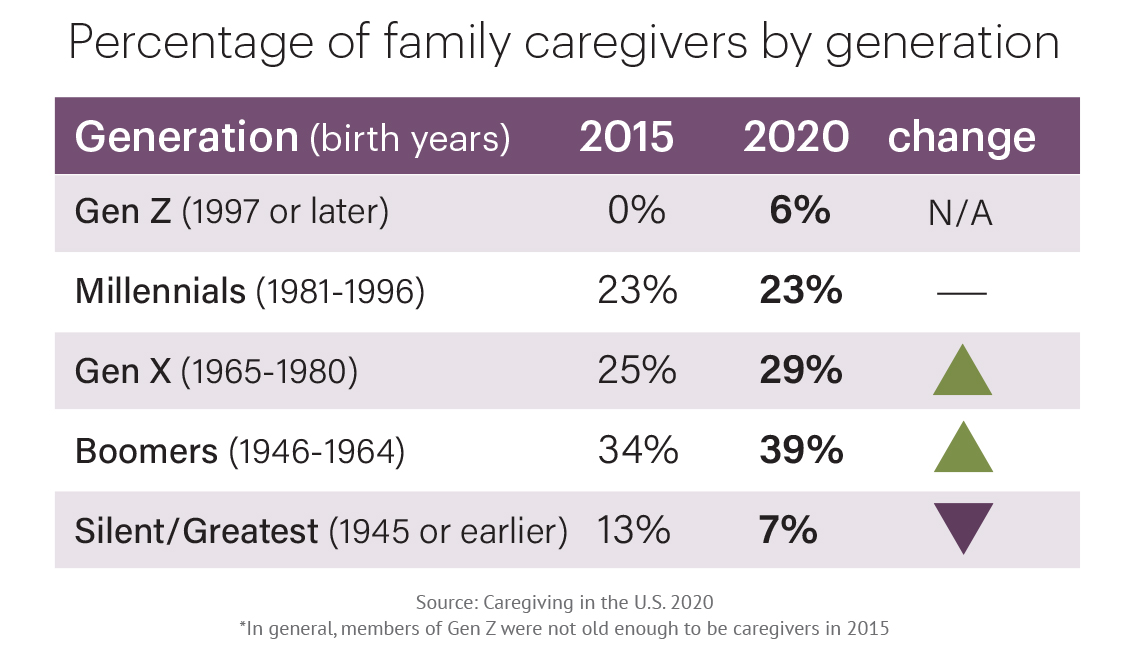 "We always talk about the average caregiver. I really pushed hard to talk about the many different aspects of caregivers,” said Susan C. Reinhard, AARP senior vice president and director of the AARP Public Policy Institute, who played a key role in the new report.

Reinhard said her interest in family caregivers dates to her days as a visiting nurse, when “they were the ones who opened the door."

Bethany Robertson, a millennial who now lives in Fort Lauderdale, Florida, was only 27 when she shouldered the responsibility of caring for her beloved grandmother, Maria Viviano, who had suffered a serious stroke in New Jersey. 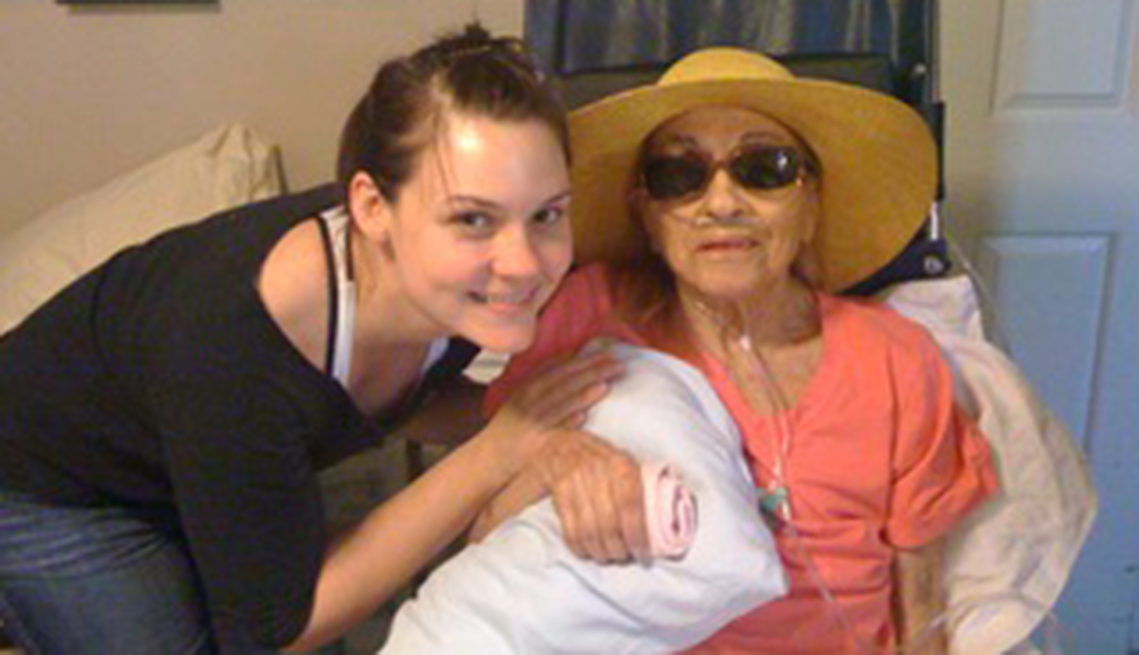 Only at the hospital did Robertson learn that her grandmother had given her both medical and legal powers of attorney. And amid bleak medical prognoses at the New Jersey hospital, she sought her guidance.

"I asked, ‘Do you want to fight?’ She looked at me and nodded her head very emphatically, ‘Yes.’ “

After hovering near death, Viviano recovered, but with restricted speech and movement. Yet when Robertson inquired if her grandmother would prefer a nursing home, she was met with tears.

Robertson realized that caring for her at home was her only option. She moved her to the condominium in Charleston, S.C., that she shared with her husband. She struggled to find reliable certified nursing assistants to help her.

But as hard as it was, “We shared many awesome moments."

Viviano stayed at Robertson's home, where she died peacefully after nearly two years, surrounded by family.

Lost in the neighborhood

Jeanne Wintz of Seattle is the main caregiver for her husband, Jim, a role that began when he first showed early signs of dementia. He had worked for decades as a psychiatric social worker. Now she grew uncomfortable leaving him home alone.

"I realized he couldn't find his way around the neighborhood where we had lived for 40 years,” Wintz said. She is now 72, in good health, and her husband is 89. For his sake, they moved to an independent living complex, where he attends a regular “memory fitness” class that he thoroughly enjoys, she said.

Wintz uses spreadsheets to keep track of her husband's appointments and their locations.

After all, she formerly worked as a top executive at a major research company.

But she is the exception. More than 1 in 4 caregivers said they find it difficult to synchronize such care, up from 19 percent in 2015.

"The care coordination should not be so hard,” said AARP's Reinhard, who believes caregivers should be part of the official caregiving team.

Hispanic and African American caregivers devote more hours to caregiving, and they also help with more medical and nursing tasks, the report found.

In some cases, they may find it hard to find long-term care facilities where they feel comfortable, or that are affordable and located in their communities, said María P. Aranda, associate professor and executive director of the Edward R. Roybal Institute on Aging at the University of Southern California in Los Angeles.

The increased prevalence in caregiving shown by the report may have several causes, said Aranda, who served on the report's advisory panel.

It may reflect that care recipients are living longer, with a variety of disabilities, she said.

And it may also show that people are embracing the label of caregiver, as it becomes more acceptable in society, she said.

"Caregiving is part of the family life cycle,” Aranda said. “The lion's share of people do it because they want to do it, and they want to provide the best care for their loved ones."