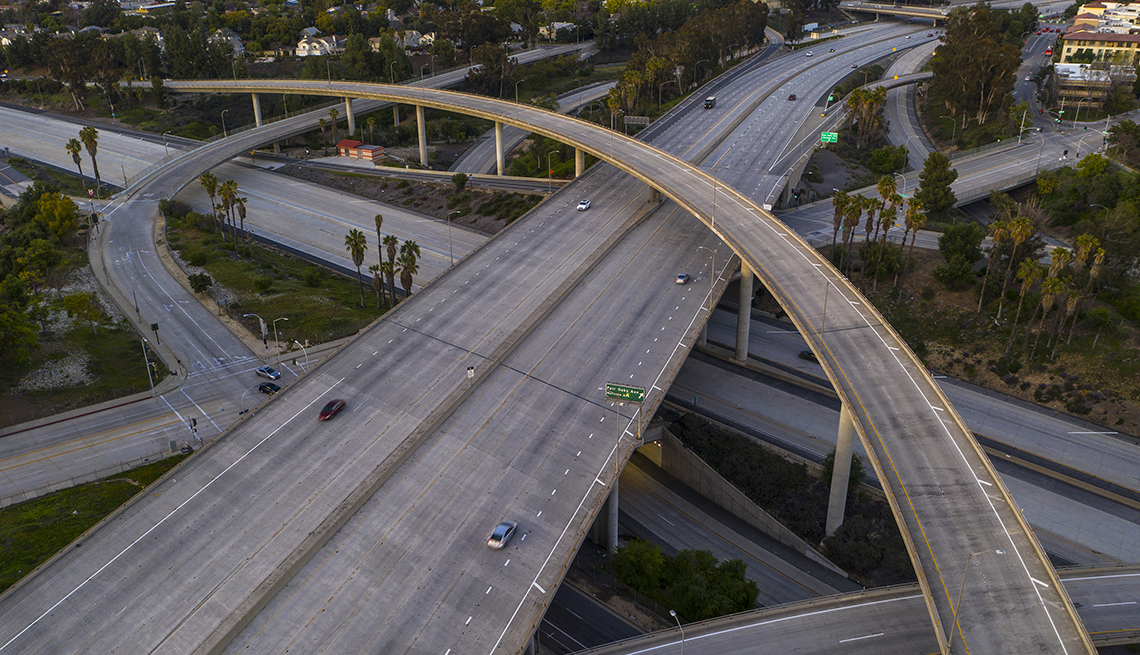 An aerial view of light traffic at the interchange of the 210, 134 and 110 freeways in Pasadena, California.

En español | With the COVID-19 pandemic causing business shutdowns and stay-at-home orders clearing traffic from roads across the country, 11 of the largest U.S. auto insurance companies say they will take the unusual step of giving back a portion of premiums to policyholders because they have fewer accidents to cover.

Other companies are considering givebacks as well. These insurers have made commitments as of Thursday:

• Allstate, based in Northbrook, Illinois, and the nation's fourth largest auto insurer, announced it will refund 15 percent of customers’ monthly premiums in April and May, returning more than $600 million to policyholders.

• American Family Insurance of Madison, Wisconsin, the ninth largest firm, will make a one-time repayment of $50 for each vehicle on its automotive policies.

• Geico, a subsidiary of Berkshire Hathaway headquartered in Chevy Chase, Maryland, is giving a 15 percent credit to auto and motorcycle insurance customers whose policies renew between April 8 and Oct. 7 and also is extending the discount to new policies purchased in the same period. Berkshire Hathaway companies are considered the second largest U.S. auto insurers.

• The Hartford, whose policies include AARP-branded auto insurance, says it will give customers a 15 percent refund on their April and May personal auto premiums for policies in force as of April 1. The Hartford, Connecticut, insurer will give back about $50 million over the next two months.

• Liberty Mutual, the Boston-based sixth largest insurer, is giving personal auto insurance customers a 15 percent refund on two months of their annual premium, which will return about $250 million to Liberty Mutual and Safeco customers. The automatic refunds begin in April.

• Nationwide, the No. 8 auto insurance carrier with headquarters in Columbus, Ohio, is offering a one-time premium refund of $50 for each personal auto policy in effect March 31. The refund is the equivalent of 15 percent of an average bill for two months and will be credited automatically within 30 days to a customer’s most recent method of payment.

• Progressive Insurance, with corporate headquarters in Mayfield Village, Ohio, will give a 20 percent credit for April premiums to personal-auto-insurance customers whose policies are current on April 30, and another 20 percent reduction on May premiums for those whose policies are in effect May 31. The givebacks, which will be applied automatically in May and June, will be worth about $1 billion total.

• State Farm, based in Bloomington, Illinois and the country’s largest auto insurer, says on average its customers will get a 25 percent premium credit for March 20 to May 31. Exact percentages will vary by state. Policyholders will see the bill credits as early as June, worth $2 billion in total.

• Travelers, the nation’s 10th largest auto insurer, has decided to provide its personal-auto-insurance customers an automatic 15 percent premium credit for April and May. Its corporate headquarters are in New York City.

• USAA, the San Antonio-based member-owned association that serves current and former military personnel, will return $520 million to its members through a 20 percent automatic bill credit on two months of premiums.

Allstate will begin paying back the money the week of April 12, often by crediting customers’ bank accounts or credit cards. American Family will send out checks over the next two months. That way, even customers who already have paid their premiums six months or a year in advance will receive the benefit.

"We wanted to return an amount of premium that was both meaningful to our customers and in line with what we're experiencing and estimate we will experience in reduced claim losses,” Ken Muth, American Family's media relations director, explained in an email.

Geico's automatic credits to insurance bills are expected to average $150 per auto policy and $30 per motorcycle policy, according to a company email. Through April 30, it also has stopped canceling policies for nonpayment and is willing to work with customers on payment options.

If the coronavirus crisis continues beyond May, some companies have indicated that they may give back more money.

"We will continue to monitor the pandemic and make decisions accordingly,” Allstate spokesman Ben Tobias said via email.

Several other companies have signaled that they're considering similar givebacks, said Mark Friedlander, director of corporate communications for the Insurance Information Institute. The industry group is based in New York City.

Car insurance companies are able to refund money to customers because, with the vast majority of the nation's population compelled to stay at home, they have fewer claims to pay. In California, stay-at-home restrictions that began March 20 have reduced traffic by 60 percent and cut accidents by half, the Los Angeles Times recently reported.

“We insure more cars than anyone and we see from our claims activity people are driving less,” Michael L. Tipsord, State Farm’s chairman, president and chief executive said in an emailed statement. “This dividend is one of the ways we’re working to help our customers during this unprecedented situation.”

Auto insurance companies told AARP that they also have put other measures in place to help customers who have lost their jobs or been furloughed and are in financial difficulties. Many insurers are offering assistance to customers, but each company’s response differs; call your agent or company for details.

Travelers Insurance is temporarily suspending cancellation and nonrenewal of policies if customers are unable to pay on time, spokeswoman Chesleigh G. Fowler said via email.

Editor's note: This story, originally published April 7, 2020, has been updated to add the participation of more companies in temporarily reducing auto insurance premiums.