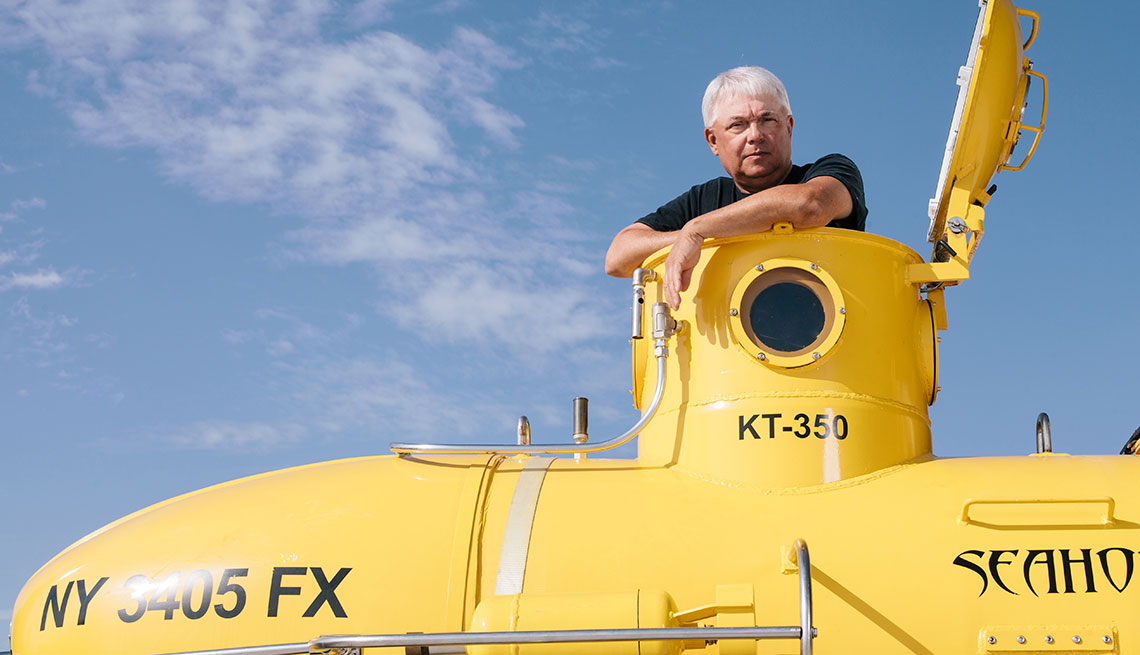 Mark Trezza, a 55-year old entrepreneur, dives deep into his life dream with his yellow submarine, the Seahorse.

Despite his zigzagging career trajectory, Trezza, 55, long wanted to add one more profession to his CV: underwater explorer.

In 2010, Trezza moved toward fulfilling his childhood dream. He purchased a secondhand submarine from the owner of a marina in Kingston, N.Y., and persuaded his cousin David Trezza, a mechanical engineer, to be his business partner and refurbish it. The project, including the overhaul, cost almost as much as a new compact car, although Trezza declined to share the figure.

Last month, the cousins and their bright yellow 15-foot-long K-350 mini-sub, the Seahorse, participated in an expedition to solve one of New England's most enduring aviation mysteries — the final resting place of a missing corporate jet that likely plunged into Lake Champlain more than 43 years ago.

"All my life I've been waiting to do an expedition like Jacques Cousteau," Trezza said.

While in college, he first spotted a photo of a sub like the one he would later buy. George W. Kittredge — dubbed "the father of personal submersibles" — designed the battery-powered K-350, which has a maximum recommended depth of 350 feet.

When Trezza ultimately saw the sub in a marina owned by an acquaintance, it was in rough shape. "It was mostly apart and filthy dirty," he said. Still, he was smitten: "I'd been waiting 30-some years to get close to one of these things."

Initially, he envisioned the sub as a business venture. Overhead would be negligible. He could store it for free on his uncle's farm. His cousin would serve as chief engineer and there were no insurance costs. "I can't get insurance," Trezza said. "In fact, the only insurance I have on the submarine is when it's attached to my truck."

He hoped filmmakers would rent the underwater craft as a prop, but has yet to find clients. He has also tried to entice schools to use the sub as an educational exhibit, but has earned just $600 in fees for two visits to a local high school science class.

Though Trezza still works as a security guard on occasion, he's devoted much of his time to exploring opportunities for his sub. 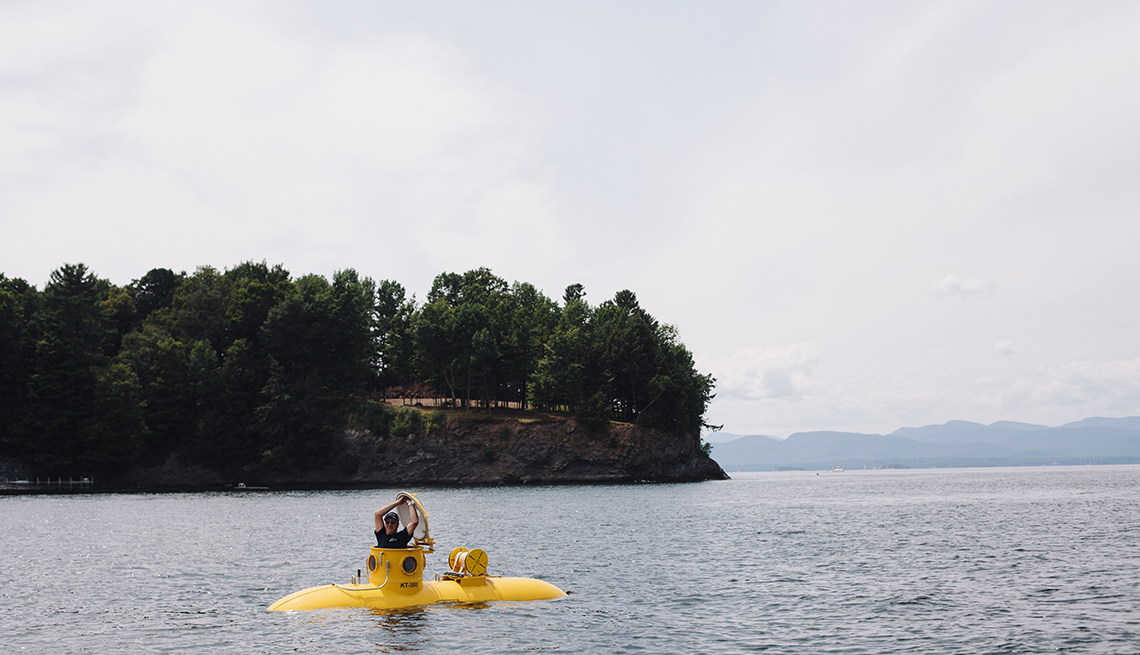 Mark Trezza and his refurbished submarine went to Lake Champlain to search for a plane that reportedly crashed into the lake in 1971.

Last year, he bumped into a friend, Raymond Siler, a private investigator specializing in missing-person cases. Siler suggested that they join forces to track down missing drowning victims. Trezza jumped at the opportunity to put his sub to good use.

For their first case, they renewed the search for Edison Arias, who drowned in 1993 in New York's Lake George. Arias — "believed to be the only Lake George drowning victim in modern times whose body has not surfaced," according to the Glens Falls Post-Star — happened to be a prosecution witness in a New York City case involving a drug cartel.

Before embarking on the Lake George mission, Trezza conducted months of research about the case, coaxed an expert in side-scan sonar to donate his services (the expert in turn recruited volunteers from the Salem, Mass., Police Dive Team) and checked the sub's seaworthiness during test dives in a local quarry.

In the cramped mini-sub, an average-size person can't stand up when the hatch closes. David Trezza lies on his stomach on the floor to drive and Mark sits on a wooden bench, his legs straddling his cousin's body, so he can look through the round viewing port. Underwater, "the only thing you hear, really, is your thruster motors," Mark said.

Despite the discomfort, he describes his time hovering near the lake bottom as a high point of his life: "When we do these expeditions like this," Trezza said, "I don't want to come home."

After reading about Trezza's exploits in Lake George, Scott Van Laer, a New York state forest ranger, approached him in March. Van Laer, who studies aviation accidents in the region as a hobby, had just contacted Kristina Coffey, the daughter of a pilot whose plane presumably crashed into Lake Champlain in January 1971.

Debris from the plane occasionally washed up on Lake Champlain's eastern shoreline, but the jet's fate has long baffled investigators. Coffey, a toddler when her father disappeared, wanted to renew the search for the missing jet.

Trezza agreed to donate the sub and his time to the new case. Much of the volunteer search team reconvened in Vermont in July, hoping to search an 18 square-mile area of the lake where the plane is believed to have gone down. 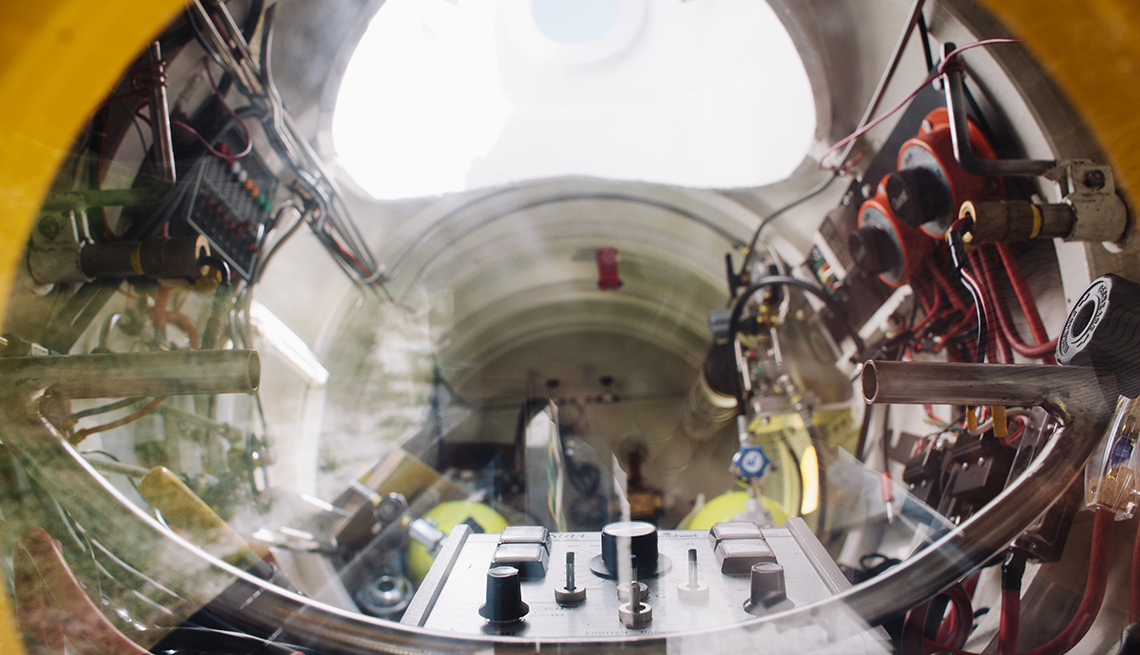 A peek inside the Seahorse, Mark Trezza's refurbished submarine, his potential next revenue source.

But Mark's mission was marred by mechanical glitches and logistical problems. A towline became tangled in one of the sub's three electric thruster motors, delaying its dive.

Ultimately, the sub searched only shallow waters not far from shore. Although the quest was inconclusive, Mark believes the search team will ultimately be successful in locating the plane.

Despite the difficulties, Trezza says, the Lake Champlain effort was a learning experience: "Challenges galvanize your resolve."

Right now, the outlook for Trezza's submarine operation seems as murky as the bottom of Lake Champlain. The Trezzas and Siler plan to investigate several other missing-person cases, including a drowning victim in Schroon Lake in the Adirondacks later this year.

While Trezza has volunteered his services for past search efforts, he says he knows that at some point he will need to generate income to keep the business afloat. He's looking at underwater treasure hunting as another potential revenue source. And a television producer is currently pitching a reality series about Trezza and his colleagues to various networks.

Even with the recent setbacks, Trezza says he appreciates the long wait he endured to realize his dream. Perhaps "some cosmic force" caused the wait, he said. "Because we're not ready? We're not ready for certain things at a certain time that we want. We have to, I think, mature in some way to get those things."