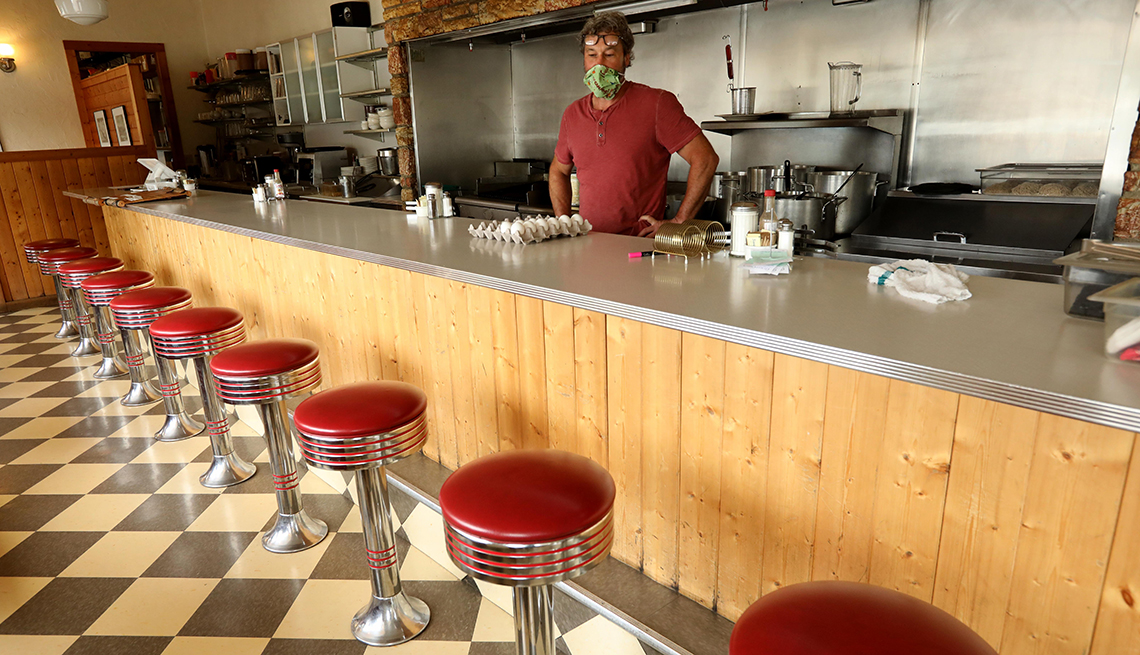 Travis Medlock stands in an empty restaurant in Mariposa, California.

En español | As the nation's workforce continues to reel from the widespread impact of the coronavirus pandemic, new research shows that workers in some industries have taken harder hits than others.

Roughly 1.3 million people filed new claims for unemployment benefits during the week ending July 11, the U.S. Department of Labor announced Thursday. Since the pandemic led to the temporary shutdowns of many businesses across the nation in March, more than 50 million people have filed new claims for unemployment benefits. The June unemployment rate for workers age 55 and older was 9.7 percent, dropping from 11.8 percent one month earlier as some businesses started to resume operations. The overall June unemployment rate was 11.1 percent.

These large numbers mean the pandemic has affected workers in most fields in one way or another, including job loss, reduced pay or reduced benefits. But new research from Gallup finds that workers in some fields have felt the impact more than others.

"The COVID-19 pandemic has caused immense economic damage, but the harm has not been evenly felt,” Gallup's Principal Economist Jonathan Rothwell writes. “Workers who provide in-person services have borne the brunt of layoffs and wage reductions.”

Gallup's COVID-19 Tracking Survey has been collecting information on the occupations of those who are working and those who are unemployed but have worked within the past year. The responses are then used to estimate unemployment by occupation.

According to the Gallup findings, these are the 10 occupations that the pandemic has affected the most.

This category includes a broad range of occupations — such as food servers, security guards and janitors — that typically involve on-site duties or face-to-face interactions. Widespread temporary shutdowns of businesses made it impossible for many of these workers to perform their job duties.

The loss of such jobs in some of these fields could affect older workers disproportionately. For example, according to a study from the Center for Economic and Policy Research (CEPR), 35.6 percent of the people who work as building janitors and cleaners are age 50 and older.

When theaters are closed for audiences, that means the cast and crew who create your favorite performances on stage and screen are out of work, at least temporarily. But the ripple effects reach out further, causing job losses for ushers, ticket takers, concession stand workers and others — jobs that older adults often fill because of the part-time hours available.

Before the pandemic hit, the business of entrepreneurship was booming for older adults. In 2018, 25.8 percent of new businesses were started by people between the ages of 55 and 64, up from 14 percent in 1996.

There is help available to small businesses that have been hurt by the pandemic. Entrepreneurs can consider applying for a Paycheck Protection Program (PPP) loan that could become a grant, look for aid from government agencies, or seek assistance from private sources and individuals.

According to the U.S. Bureau of Labor Statistics (BLS), construction-related occupations employed more than 2.6 million people age 55 and older in 2016. In fact, prior to the pandemic, the agency had cited construction and building inspectors as one of the most popular occupations for older adults.

To deter the spread of the coronavirus, many local and state government temporarily closed all nonessential stores and showplaces, which meant that employees in these fields couldn't work. According to the BLS, roughly 7.9 million people age 55 and older work in sales positions.

Driving is an occupation that tends to employ many older adults, in part due to the flexible schedules and part-time positions that are available. For example, according to the CEPR study, 46.7 percent of employees who work for public transit systems are over the age of 50.

Because workers in these fields must go on-site to fix broken mechanical and electronic devices, many saw their opportunities suspended during the periods of mandatory shutdowns.

Health care workers have been central to the nation's response to COVID-19 pandemic. But, even so, there have been job losses in these fields as hospitals and other health care facilities suspended elective medical procedures. The CEPR study found that 34.6 percent of health care workers are age 50 and older.

Not everyone who works in an office is able to do their job remotely. Many people who do clerical work, short-term temporary work or similar support positions have faced layoffs or reduced hours during the pandemic.

Editor’s note: This article was originally published on June 4, 2020 and has been updated with more recent data on unemployment.