En español | Michelle Chesney-Offutt, 54, had been out of work for about a year when she got a call from a recruiter seeking someone with help-desk skills.

At first, the headhunter told her she was a great match, but when he realized she had been out of work for a full year (and not newly unemployed as he had mistakenly assumed), he changed his tune. Company criteria ruled out applicants who had been unemployed for more than six months, he told her. "He was very apologetic," says Chesney-Offutt, who lives in Sandwich, Ill.

See also: 5 businesses you can start.

"Once they become unemployed, it takes older workers far longer than younger workers to find a new job, so a policy of not hiring the long-term unemployed has an age discriminatory effect," says Deborah Chalfie, AARP's senior legislative representative for financial security & consumer affairs.

Such policies are all too common in the current economy. And older workers can be frequent victims. As of June, jobless people who were 55 and older had been out of work for almost 56 weeks, compared with 38 weeks for all age groups, according to the Bureau of Labor Statistics. 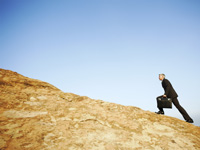 Are you being discriminated against based on your current employment status?

So just how common is the practice? Some employers suggest that it's rare. Mike Aitken, vice president of government affairs for the Society for Human Resource Management, says that, while there may be employers who follow that policy, his group is "unaware of this as a widespread practice."

He says that in a recent talk to an audience of more than 400 employers at the society's annual meeting, he asked whether any of the attendees had ever written such a job posting. "No one did," Aitken said. "The reaction was more like, 'What a dumb practice.'"

But an advocacy group that has looked into the issue comes to a different conclusion. In a review of help-wanted online postings between March 9 and April 5, 2011, the National Employment Law Project found 150 ads screening applicants based on current employment status.

Online job listing site CareerBuilder was among the sites accepting such ads. Although the company has issued a statement that it "strongly supports fair and equal hiring practices," critics ask why it hasn't simply refused to run the ads.

Next: 6 responses to use if you are being discriminated against. »

In Washington and many state capitals, sympathetic legislators are trying to outlaw this kind of discrimination.

In Congress, at least three pending bills would ban job ads that rule out unemployed applicants. The underlying practice of hiring only the currently employed would also be against the law.

Among the states, New Jersey was the first to enact a law. In June last year, the state began banning these kinds of ads (but not the hiring practice itself). The District of Columbia has enacted legislation that bars both the ads and the hiring practice. And Oregon has a new law outlawing the discriminatory ads.

A New Jersey company is facing a $1,000 fine for advertising only for employed applicants for a position of service manager, according to Assemblyman Peter J. Barnes, sponsor of the law that went into force last year.

Diane Cadrain is a Connecticut-based attorney and freelance journalist who writes about employment issues.

To date, declining to hire unemployed people is illegal only in the District of Columbia. In New Jersey and Oregon, it's illegal for employers to run advertisements that discriminate against the unemployed. If you've run into these kinds of practices in your own job search, here are six responses suggested by the National Employment Law Project, an advocacy group:

1. Apply for the job anyway, stating your qualifications.

2. If you've been screened out, document actions the employer took that appear to discriminate against you because you are unemployed — such as language in the job posting or verbal advice from recruiters or placement agencies.

3. Write a letter of complaint to the company's CEO or human resources director. The company may reconsider.

5. Consider filing a complaint with the Equal Employment Opportunity Commission or your state's employment discrimination agency. The EEOC is studying whether the practice may have a harsher than average effect on specific groups of workers, which could make it illegal under existing laws.

6. Lend your support to passage of legislation to prohibit the practice.

Save Money: 99 Ways to Save

Take the Questionnaire: You deserve a say in the future of Medicare and Social Security.