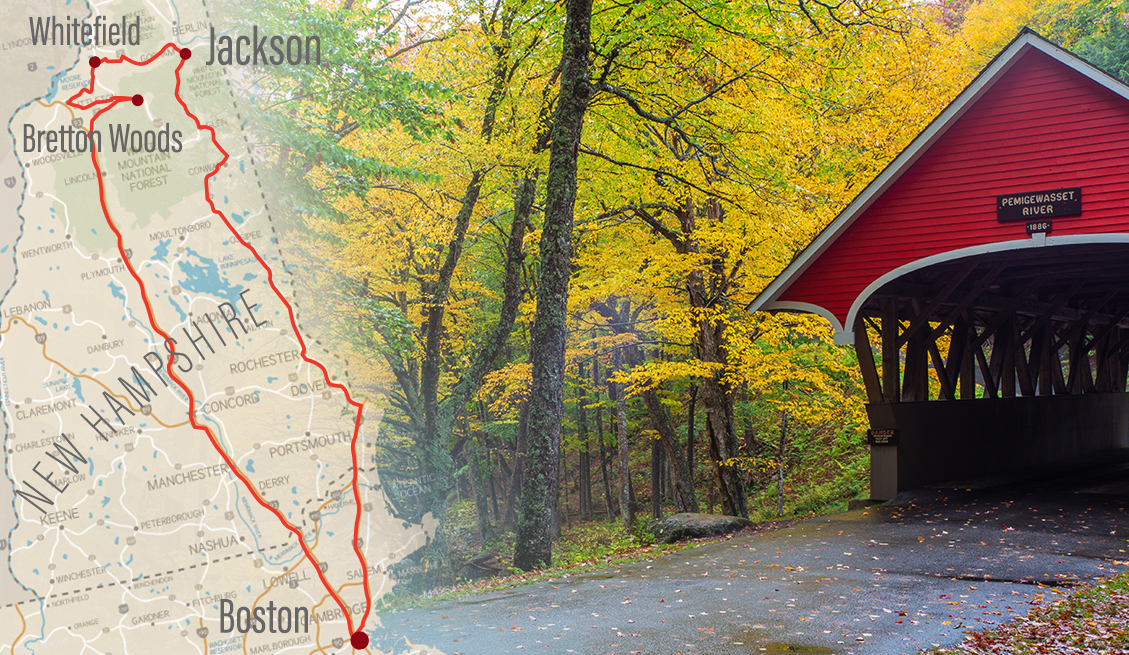 In the late 18th and early 20th centuries, city folk seeking clean water, clear air and outdoor recreation fled to New Hampshire's White Mountains. They came for the summer, arriving on trains and buckboard carriages, accompanied by servants and laden with steamer trunks. Grand hotels rose to meet their needs. While fires and neglect claimed most through the decades, a handful of hotels have survived and been restored for contemporary travelers seeking respite — whether that's hiking, skiing, visiting attractions or simply enjoying the views.

You'll find this hotel-hopping loop especially gorgeous in autumn, when reds, golds and oranges quilt the mountains and snow sometimes crowns Mount Washington. In winter, the area draws skiers and other outdoor-sports lovers, as well as romantics looking for a cozy scenic getaway.

The unpredictability of the coronavirus means travel restrictions are constantly evolving. Be sure to check New Hampshire's state website for updates before visiting from out of state, and follow CDC guidelines for safe travel. 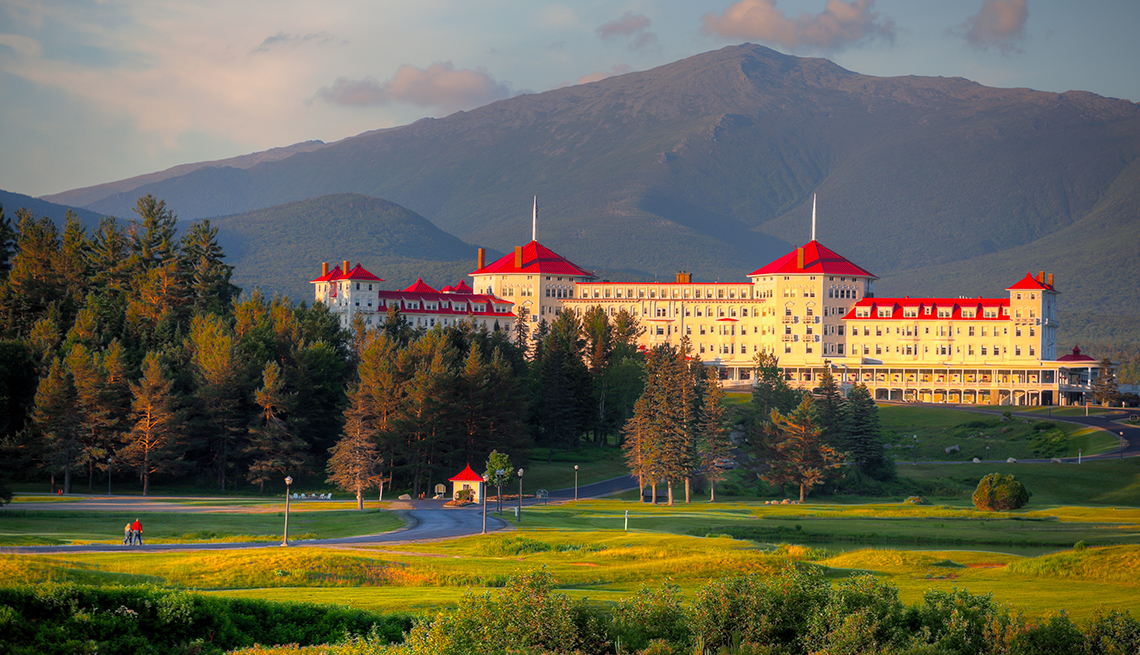 En route: The drive is about two and a half hours, but save your appetite for Polly's Pancake Parlor, close to Bretton Woods, in Franconia, New Hampshire. Named a James Beard American Classic in 2006, Polly's has been an institution in these parts since 1938. Order the pancake sampler, with your choice of up to three different made-from-scratch pancakes — Polly's even stone-grinds the grains to make its flours — with add-ins such as blueberries, chocolate chips, coconut and walnuts.

While in town, take a road less traveled to the Frost Place, poet Robert Frost's home for five years. Settle on the front porch and ponder whose woods these are, while inhaling the inspiring views of the White Mountains. Mosey the half-mile nature trail with signs displaying poems that Frost penned while here.

The hotel: Railroad tycoon and New Hampshire native Joseph Stickney set a new standard for luxury when he opened the Mount Washington Hotel in 1902. A stunning example of Spanish Renaissance Revival architecture, with its namesake peak as the backdrop, the hotel lured socialites and politicos not only with its impressive size — the 230-foot-long by 60-foot-wide lobby alone commands awe — but also with design details and technological marvels. Think Tiffany glass, elaborate chandeliers, intricate carvings and friezes crafted by 250 Italian master artisans, and private en suite bathrooms.

When Stickney died just one year later, his widow married a French prince, adding a royal lineage to the hotel's pedigree. The 1944 Bretton Woods Monetary Conference — at which the World Bank and International Monetary Fund were created and the gold standard set — sealed the hotel's place in history and its designation as a National Historic Site. Check out the Gold Room, which appears as it did on that July day when the 14 international delegates sat around a 10-legged round, rock-maple table (which came from the hotel owner's private dining room) to sign the agreement. From $259.

What to do: Thanks to a Donald Ross-designed 18-hole golf course, a spa, tennis courts, horseback and carriage rides, 6-mile cross-country trail loop, alpine area, disk golf and other recreational options, you never have to leave the property ... but Mount Washington beckons. The Mount Washington Cog Railway, just a little more than 5 miles away, has chugged up and down the Northeast's tallest peak since 1869. Allow three hours for the ride, which includes an hour at the 6,288-foot summit -— or maybe save time for it on the morning of Day 2, below. 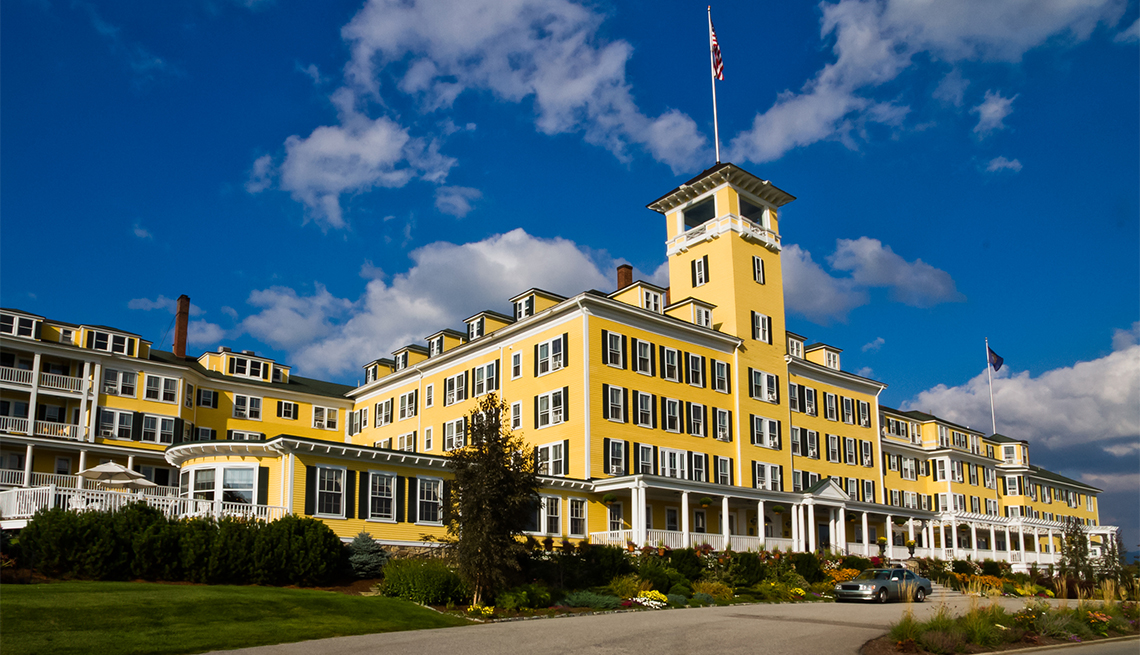 En route: Spend a few hours prowling around Littleton, a former mill town reborn as an artsy destination, which is about a half-hour west of Bretton Woods. Boutiques, galleries and restaurants line the main streets. At Chutters, the world's longest candy counter stretches for 112 feet and is stocked with more than 500 types of sweets and treats.

When hunger or thirst strike, snag a table at Schilling Beer Co., in a renovated 18th-century gristmill. Pair a European-style small-batch brew with a wood-fired pizza crafted with locally sourced meats and cheeses.

Then head about 15 minutes northwest to the hotel.

The hotel: Surrounded by golf-green, manicured lawns and a working farm, the sprawling four-story mustard-yellow Mountain View Grand Resort commands its location amid the White Mountains. Settle into an Adirondack-style chair or a rocker on the veranda and savor eye-candy vistas of the Presidential Range. The Dodge family opened the Mountain View House in 1866, and its popularity necessitated growing both outward and upward. When the family sold the property in 1979, it could house more than 300 guests, and the registrars listed celebrities, presidents and writers. It closed in 1986 but reopened in 2002, after a four-year $20 million renovation that restored the grandeur and added a spa. From $159.

Especially if you're traveling with the grandkids, you'll like the working farm's open house with a farmer who'll answer your questions (open from 8:30 a.m. to 10 a.m. daily). 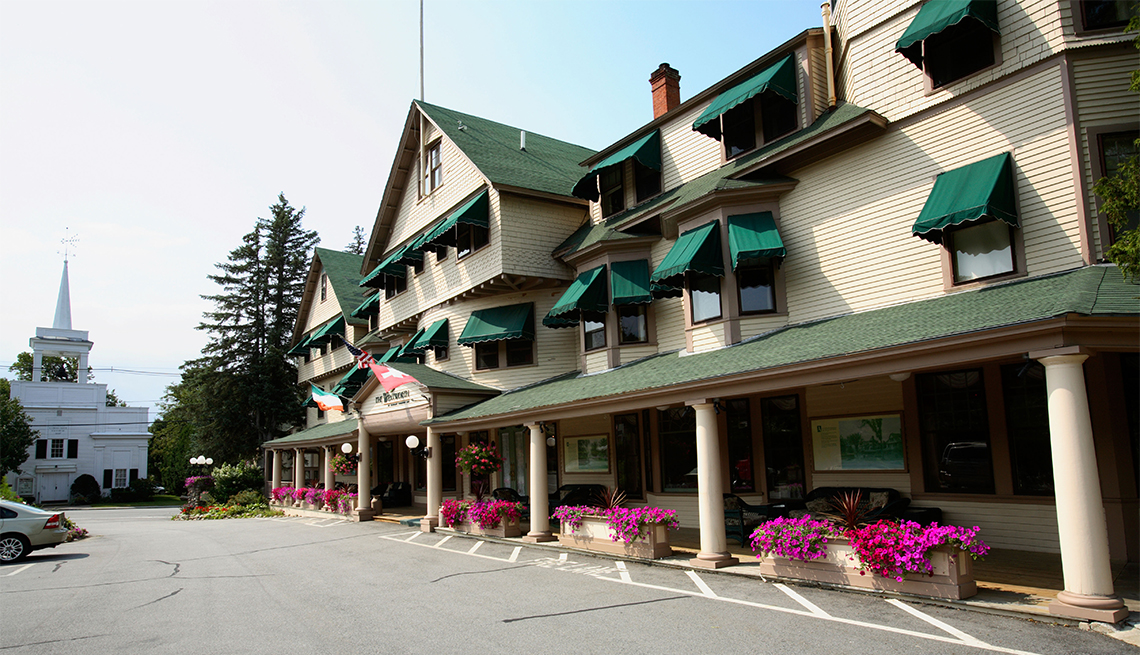 Day 3: Whitefield to the Wentworth in Jackson

Take Route 116 East for 10 miles for a detour to Jefferson. Then you have about an hour's drive to Jackson on Route 2 East to Route 16 South.

For a different perspective on Mount Washington, ascend the 7.6-mile Mount Washington Auto Road in Greens Grant, about a 20-minute drive south of Gorham, a construction marvel that opened in 1861 to horse-drawn carriages. You can drive this steep road yourself, but leave that to the pros on a two-hour guided van tour. You'll learn about the fauna, flora, unique weather and history of the mountain and get splendid views of the Great Gulf Wilderness, Pinkham Notch and the Presidential Range.

The hotel: If the Omni Mount Washington is a concert grand piano, the Wentworth is a baby grand. Joshua Trickey built the hotel in 1869 as a wedding gift for his daughter, Georgia, and her fiancé, Gen. Marshall Wentworth. And it has grown over the decades to more than two dozen outbuildings, including Queen Anne-style guest cottages, stables and a casino where Harry Belafonte, Alan King and Zero Mostel performed. Closed in 1971, a developer acquired the destitute property in 1982 and tore down unstable buildings, but didn't reopen the hotel. Swiss hotelier Fritz Koeppel purchased the property with his first wife in 1988 and transformed it into a cozy and intimate country retreat. Gleaming hardwood floors topped with Asian-style rugs welcome visitors into the lobby, and white linens drape dining room tables. Gas fireplaces and outdoor hot tubs, some in turrets, accent the cottages. Koeppel's widow, Ellie, easily recognizable by her Irish brogue, now runs the hotel. From $165 with breakfast, $249 with breakfast and four-course dinner nightly.

What to do: The town of Jackson, with its 1876 covered bridge and handful of shops and restaurants, earns the title “precious.” The National Register-listed Jackson Falls Historic District encompasses the village, including the Wentworth, and much of a scenic 5-mile mountain loop ebbing and flowing by country inns and alpine chalets, a ski area, small farms and the privately owned Wentworth Castle, a Victorian stone mansion just above the hotel. The Wildcat River tumbles from the castle down to the village, providing background music for hotel guests. Take a dip in one of the cascade's pools, or catch some rays and picnic on the rocks along the river's banks. 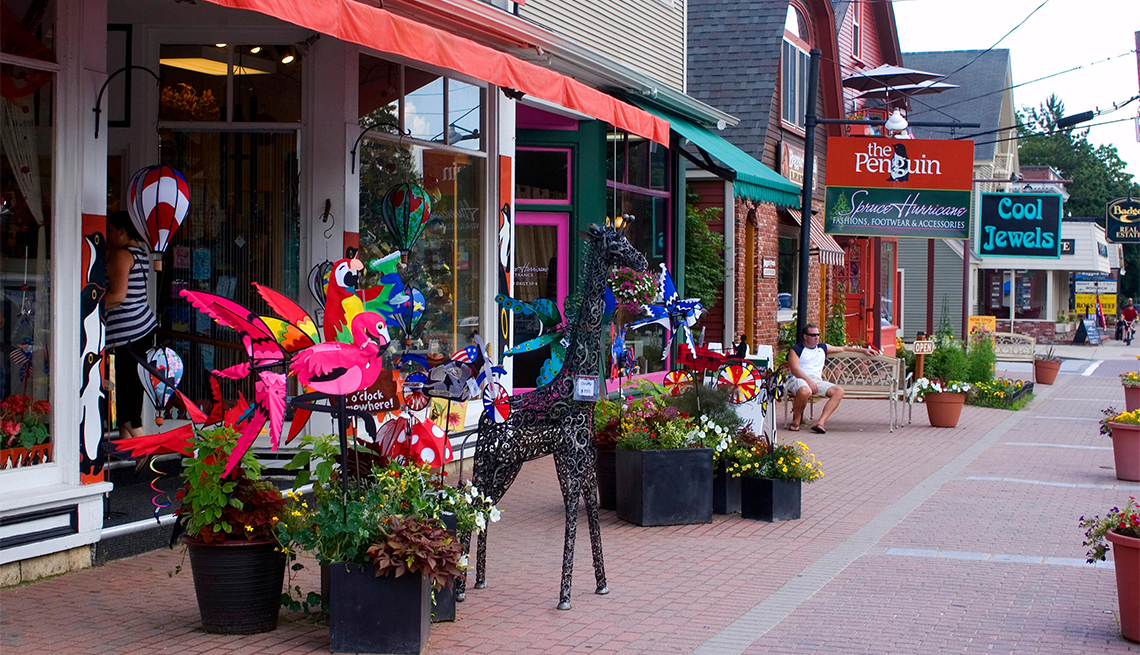 Drive approximately 145 miles via Route 16 South and Interstate 95 South, with a stop along the way in North Conway.

En route: About 8 miles south of Jackson, you'll find North Conway, home to a quaint downtown, with its Victorian railway station facing the town green. (Conway Scenic Railroad trains operate daily.) You can visit Mount Washington Observatory's Weather Discovery Center and interactive museum, and independent stores such as White Birch Books. Or power-shop some of the 100-plus tax-free outlet stores strewn along Route 16, south of town. At the Lindt Chocolate Shop, perhaps indulge in a few truffles for nibbles when you're back on the road.