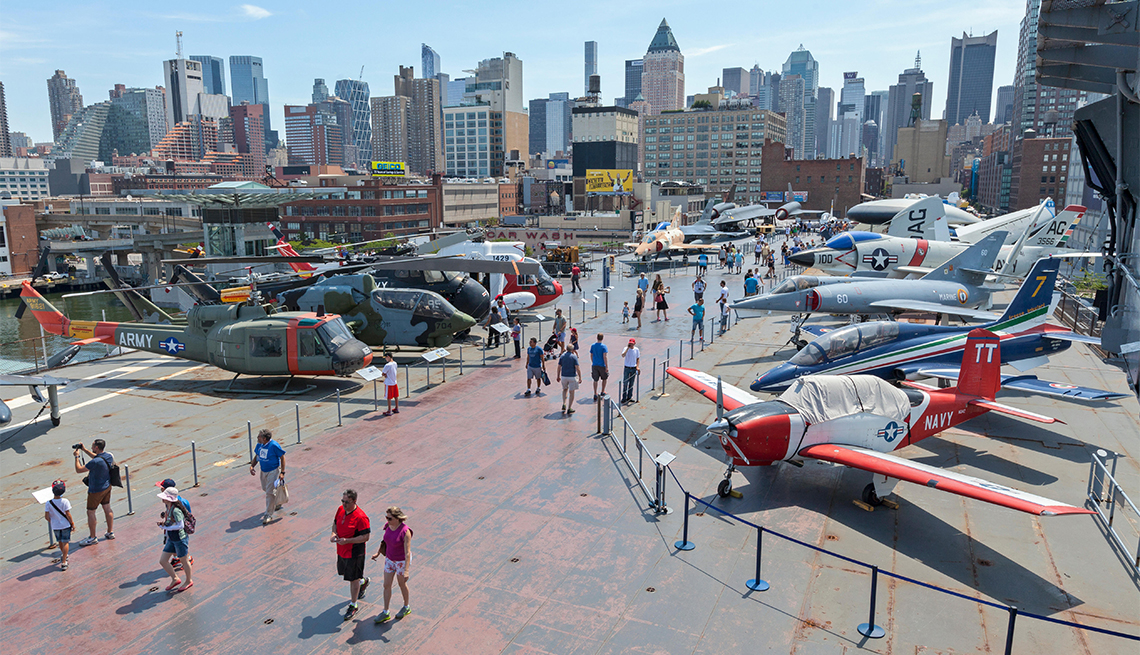 Step aboard the USS Intrepid, and that’s just one of the crew member voices you hear. Their heart-wrenching recollections of Navy life are part of an introductory film that chronicles the roles the ship played throughout its three-decade military career. Throughout the film, former crew members relay moving anecdotes of their time living and serving onboard this legendary aircraft carrier, now berthed majestically on the Hudson River at Pier 86 on Manhattan’s West Side, the centerpiece of the Intrepid Sea, Air & Space Museum. Their words illuminate the fact that the Intrepid was more than a Navy warship — it was a community of officers and enlisted men and a floating metaphor for American innovation and bravery.

“We have over 200 oral history interviews in our collection,” says Jessica Williams, the museum’s curator of history and collections. “They’re personal stories from people who served in all different jobs all across the ship’s history — stories that underscore the human experience and what it was like to live on this massive ship.” 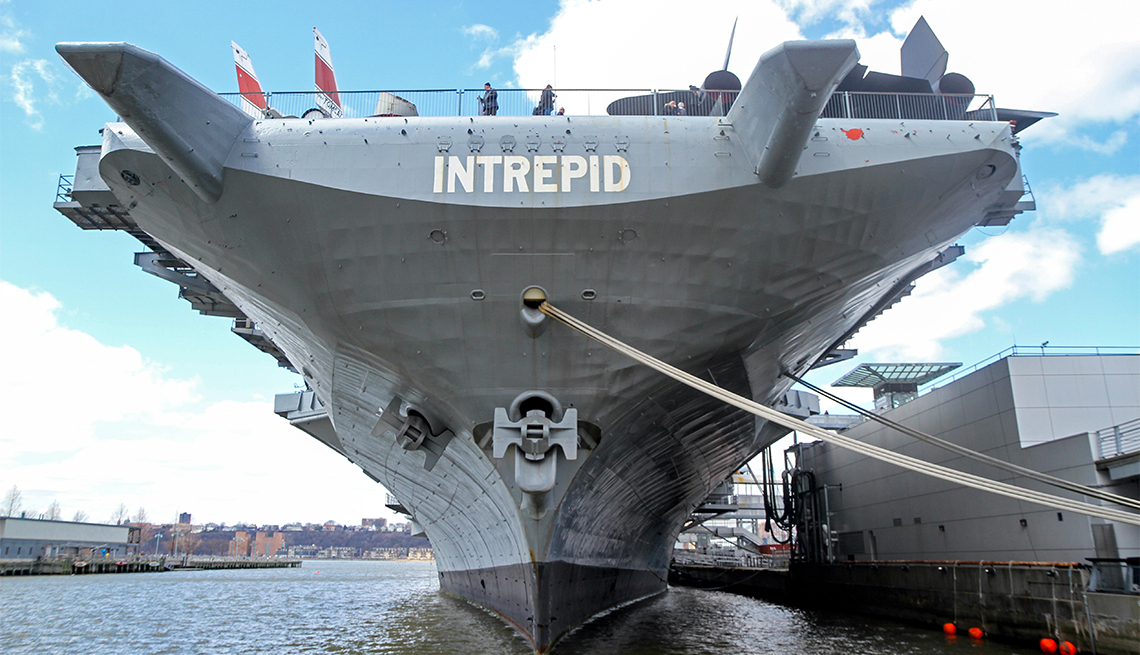 COVID-19 Update: All museum patrons ages 12 and older must provide proof of at least one vaccination shot against COVID-19 along with photo ID. The museum currently requires timed-entry tickets. Advance online purchase is recommended. Face coverings are required in indoor spaces for all visitors regardless of vaccination status. Guided tours, including access to the Concorde, are temporarily suspended. Check the museum’s website for updated health and safety information.

Location: On Manhattan’s West Side at Pier 86, at 46th Street and 12th Avenue

Getting There: Although Intrepid is a long walk from the nearest subway station at 50th Street and Eighth Avenue, the crosstown M-50 bus travels west on 49th Street and stops in front of the museum. Taxis can take you right to the museum entrance. Several parking garages are nearby if you drive.

Best time to visit: The museum is less busy weekdays at opening time.

Accessibility: The majority of the museum is wheelchair-accessible, though a few areas offer stair-access only. There are no wheelchairs for public use, but you can borrow lightweight stools for making rest stops (available on a first-come, first-served basis). Admission is free for personal care assistants who accompany visitors.

The third of 24 Essex-class carriers built by the United States in the 1940s, Intrepid entered service on Aug. 16, 1943﻿, and served in the U.S. Navy through the height of the Cold War. The ship played a critical role in the Pacific theater during World War II, carrying 3,200 officers and enlisted men and nearly 100 aircraft. Throughout its deployment, Intrepid survived five ﻿kamikaze attacks and a torpedo strike while destroying 650 enemy planes and sinking or damaging 269 enemy ships. The aircraft carrier later plied the Mediterranean and the North Atlantic as an anti-submarine warfare carrier, did three tours of duty in Vietnam, and served as a recovery vessel for NASA’s Mercury 7 and Gemini 3 missions in the early 1960s.

Following﻿ decommissioning ﻿of the storied warship in 1974, the Navy sent ﻿Intrepid to the Philadelphia Navy Yard to await the scrap﻿ heap, but New York City real estate developer and philanthropist Zachary Fisher had a better idea. A longtime supporter of the U.S. Armed Forces, the Brooklyn nati﻿ve and his wife, Elizabeth, spearheaded a campaign to transform the battle-scarred carrier into a world-class naval museum, which opened in 1982. The carrier was designated a National Historic Landmark in 1986.

You’ll enter Intrepid on the Hangar Deck, a massive space that once served as a garage for Navy aircraft. Now it’s home to the museum’s permanent exhibits — a thoughtfully curated array of vintage artifacts, interactive displays, restored aircraft and historic video footage designed to lead guests chronologically through the carrier’s storied deployment.

“The vast majority of the collection consists of items donated to us by former crew members and their families,” says Williams. “There are uniforms, pilot gear, diaries and letters. Some guys took photographs or slides or 35-mil﻿limeter films when they were onboard. Those things really help lend a personal connection to the people who served onboard this ship.”

One of the deck’s most powerful exhibits “Kamikaze: Beyond the Fire,” a dramatic multimedia experience, tells the story of Japan’s “special attack” suicide bomber﻿s known as kamikaze﻿s, the terrifying new weapon it launched in October 1944 as the Allied advantage grew in the Pacific.

“On the Line” details the role Intrepid played in the Vietnam War through artifacts, interviews and film clips, including the Triple Stix Log, a diary kept by four junior pilots who shared bunk room 111 (aka “Triple Stix”) that describes their Vietnam missions and antics while onboard the ship in 1967. “It’s one of the most comprehensive accounts of pilots’ time in Vietnam,” says Jennifer Elliot, the museum’s manager of youth leadership and alumni programs.

On the lighthearted side, “Navy Cakes: A Slice of History” celebrates the Navy’s long tradition of using cake as a morale booster. Featuring recipes, photographs and kitchen paraphernalia required to create confections that could feed thousands of sailors, the exhibit spotlights life at sea through a sweet lens. “The men onboard Intrepid were here from six months to a year at a time, so they looked for any opportunity to celebrate — and bake cakes,” says Elliot. 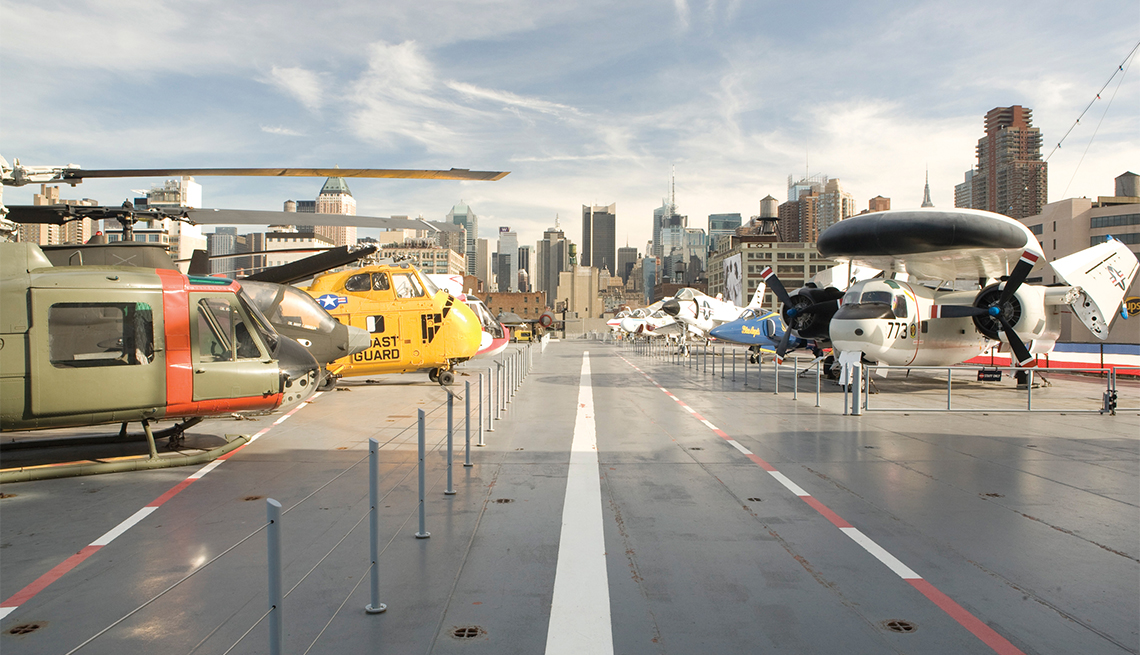 Courtesy of the Intrepid Museum

There’s much more to explore on the ship, including ﻿the Flight Deck, which is “the ship’s reason for being,” says ﻿curator Williams. Here is where you can see Intrepid’s 29 restored aircraft, including the newest addition: a Douglas F4D Skyray that flew from the ship in 1961. You can also see the restored galley used by Intrepid’s cooks to prepare about 7,500 meals each day, and an example of the ship’s berthing compartments — snug sleeping quarters for up to 60 men.

“Many spaces onboard still look the way they did when the ship was in service,” says Williams. “[They’re] really evocative of what the ship was like during service, and help visitors get into the mindset of the crew.”

You could easily spend several hours discovering ﻿the many nooks and crannies﻿ on Intrepid, but the museum’s appeal stretches far beyond the ship with these three additional components:

• The ﻿space ﻿shuttle Enterprise. In 2012 Intrepid became the proud home of Enterprise, one of NASA’s four remaining space shuttles. As NASA’s prototype orbiter, Enterprise paved the way for the country’s three-decade space shuttle program, performing crucial aerial and launch tests to determine the viability of sending a reusable aircraft into space. Today, see the shuttle in a custom pavilion on Intrepid’s Flight Deck. Inside, 17 dynamic displays immerse visitors in the exciting story and groundbreaking technology of the shuttle era.

• The USS Growler. This guided-missile-carrying submarine patrolled the waters off the east coast of the Soviet Union from 1958 to 1964. It carried the powerful Regulus 1 missile and had one mission — to deter the Soviet Union from launching a nuclear attack against the United States. “A View ﻿From the Deep: The Submarine Growler and the Cold War,” a fascinating exhibit on Pier 86’s north side, details the sub’s history. You can also board it for a firsthand look at the cramped conditions sailors endured.

While you’re in New York City, visit Governors Island. With a military history that stretches from the American Revolution to World War II, this 172-acre island is home to dozens of Colonial and Georgian Revival officers’ residences; a 22-acre ﻿national ﻿monument with two early﻿-19th-century forts; seven miles of car-free bike paths﻿; and a vibrant art scene with public art and several galleries. Just a short ferry ride from Lower Manhattan, it’s open seasonally between April and October.

• The Concorde Alpha﻿ Delta﻿. At the end of Pier 86, see this built-for-speed commercial airliner, one of 20 uber-luxurious Concordes flown by Air France and British Airways between 1966 and 1979. This particular one flew its inaugural transatlantic flight on Aug. 25, 1976, and then set a world speed record on Feb. 7, 1996, flying from New York’s John F. Kennedy International Airport to London’s Heathrow Airport in ﻿2 hours, 52 minutes, 59 seconds. Dwindling passenger numbers and a tragic crash in Paris in 2000 led the two airlines to retire the fleet in 2003. Today, learn about the Concorde’s legendary amenities (caviar and fine wines were the norm) and its remarkable technology in “Concorde: A Supersonic Story,” a special tour in which you take a seat in the first-class cabin.

Consider these relatively affordable hotels located near the Intrepid﻿ museum.

Yotel: In its 713 space-efficient rooms inspired by first-class air travel, Yotel offers a chic stay at a budget price a half-mile walk from both Intrepid and Times Square. Rooms from $138﻿; 570 10th Ave.

Gina DeCaprio Vercesi is a New York-based journalist whose work has appeared in the Boston Globe, National Geographic Traveler, Travel﻿ + Leisure and Sierra. She has lived in the Hudson Valley for more than 20 years. 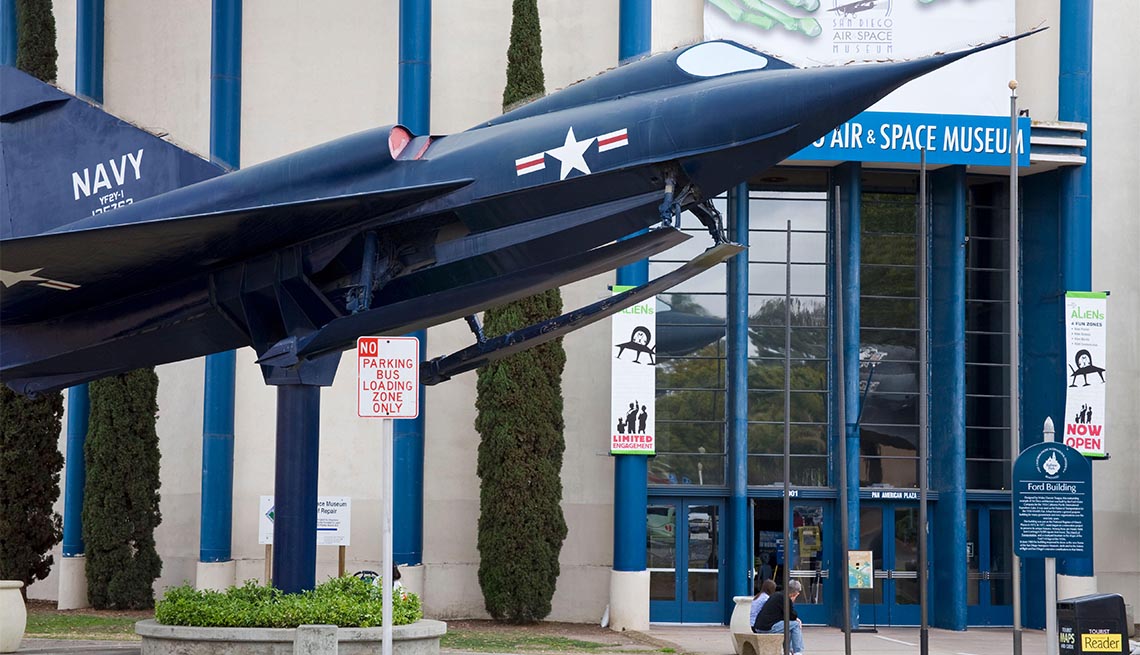 Dive Into the Story of Flight at the San Diego Air &amp; Space Museum 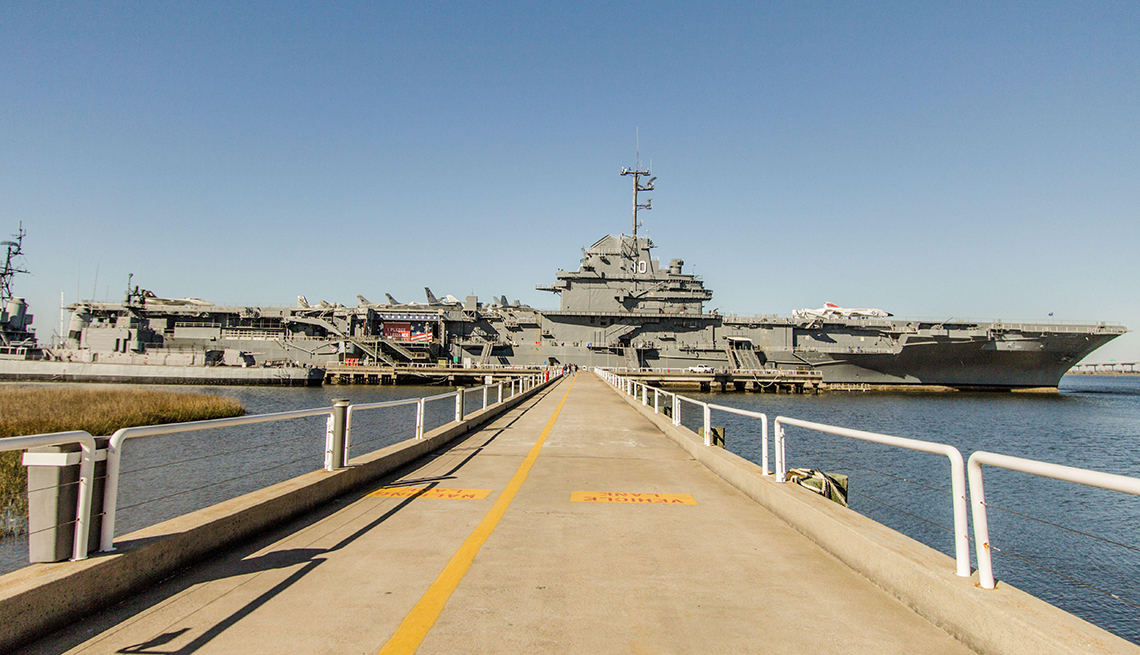 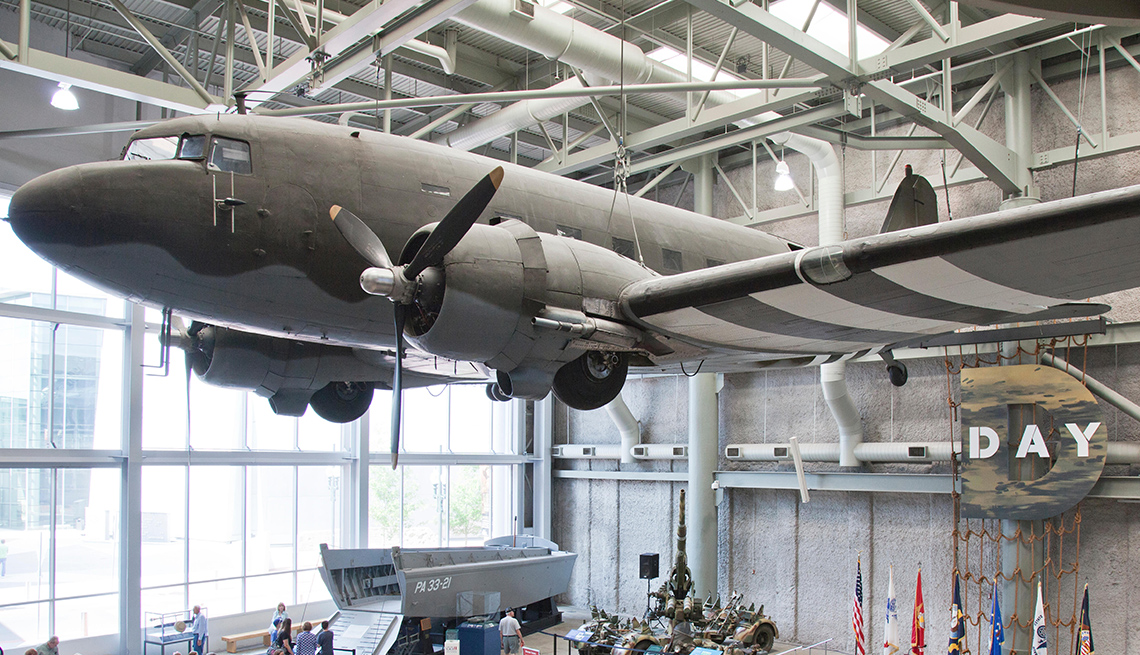