En español | The 11 states in New England and the mid-Atlantic area have lots of beloved foods that have been around for at least a century (bagels, salt water taffy, shoofly pie). Many involve seafood and most (depending on how you feel about scrapple) are delicious.

Clams on pizza? Sure — as long as they are freshly shucked, sauteed in olive oil and garlic and laid on a bed of grated parmesan cheese. Don't even think about mozzarella and absolutely no tomato sauce. Get this thin-crust pie at the celebrated family-owned Frank Pepe Pizzeria Napoletana and don't call it pizza. In New Haven, it's "apizza."

Dubious distinction as it may be, Delaware is the nation's scrapple capital. Mystery meat and cousin to North Carolina's livermush, it's basically assorted pig parts which are stewed, minced, mixed with spices, cornmeal and flour, and then baked into small loaves. Slice it off, fry it up and serve it for breakfast. 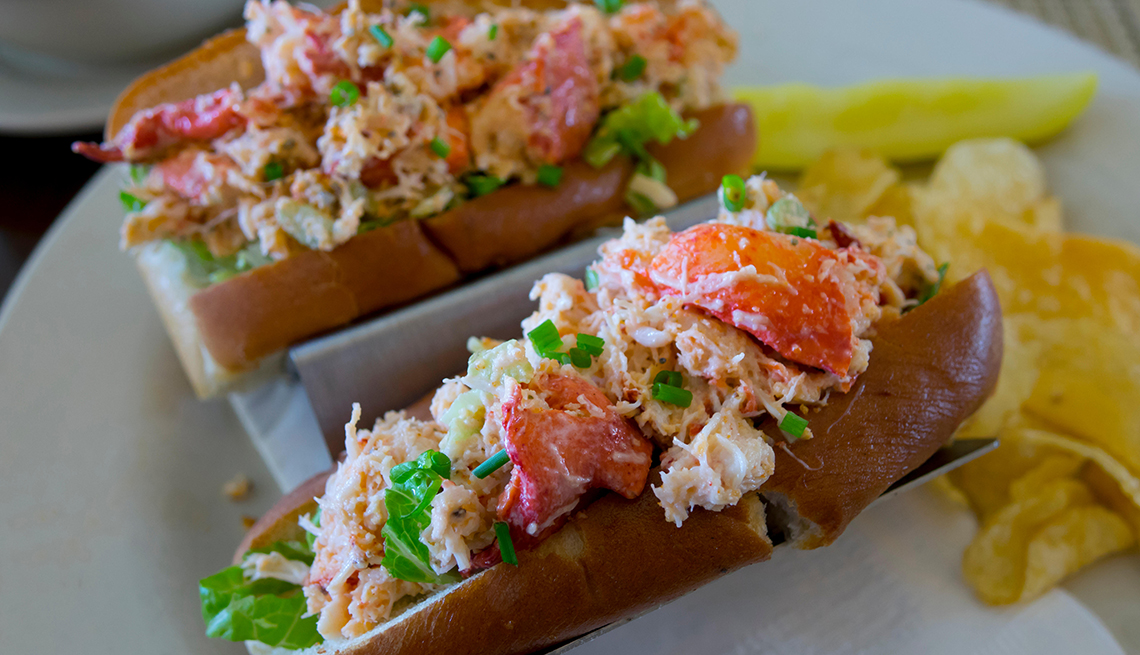 Think fresh, chilled lobster meat on a toasted or warm hot dog bun, seasoned with salt and pepper, maybe a touch of mayo and a drizzle of butter. Savor it on a paper plate in front of a seafood shack on the rocky Maine coast and you have an unforgettable, authentic food experience, says Andrew Zimmern, host of the Travel Channel show Bizarre Foods. His go-to spot for lobster rolls is Five Islands Lobster Co., not far from Portland, where “you can literally watch the lobsters come from the traps to the boat to the dock. The lobster you pick has never seen a refrigerator — it’s from the water to the pot to your plate.”

Marylanders are nuts about crabs, which come from the Chesapeake Bay. They can be eaten as a cake or as a whole in the soft shell, but the very best and totally messiest way to eat them is steamed and smothered in Old Bay seasoning mix on a picnic table covered in newspaper or oil cloth — so you can smash them with a mallet and pick out the sweet meat. Here, it's an unforgettable rite of summer.

"Without a doubt, I would drive from Minnesota, where I live, just to have a sandwich at my favorite cheesesteak and pork-sandwich store in America, John’s Roast Pork in Philadelphia."

Sure, you can find this richly flavored cream-based soup of clams, clam juice, onions, salt pork or bacon, and potatoes beyond the Northeast, sometimes listed as Boston clam chowder. You won’t get a better bowl, though, than when it’s made with fresh, sweet local bivalves in a state with such a strong chowder (or, as they say in these parts, “chowdah”) tradition. Herman Melville set an entire chapter of Moby Dick, his 1851 novel, in a Nantucket chowder house. Top spots for the soup in Boston are the city’s oldest restaurant, the Union Oyster House (established 1826), where it’s served chunky with oyster crackers, and nearby Ned Devine’s, an Irish pub in the Faneuil Hall Marketplace, which offers an award-winning version. Note that if your chowdah has tomatoes, you’re probably not in New England; that’s a New York thing.

While it wasn’t named the official beverage until 2010, the Granite State has been pressing fresh apple cider since Colonial times. It comes in the form of the traditional sweet apple juice and as alcoholic hard cider. But most delectable may be the apple cider doughnuts found around the state during autumn harvest.

Tourists in beach towns across America risk their teeth on this wax-paper-wrapped bite-sized treat, which got its start in the late 19th century in Atlantic City. Travelers would line up on the boardwalk at night to watch a machine pull and stretch the taffy, and then wrap and cut it. The chewy sweet actually doesn’t contain salt. Legend claims its name comes from a candymaker’s offhand remark after his shop had been flooded with sea water. When a little girl asked for a piece of candy, the frustrated man muttered, “You mean saltwater taffy?” It now comes in a bewildering number of flavors, from banana split to hot buttered rum. 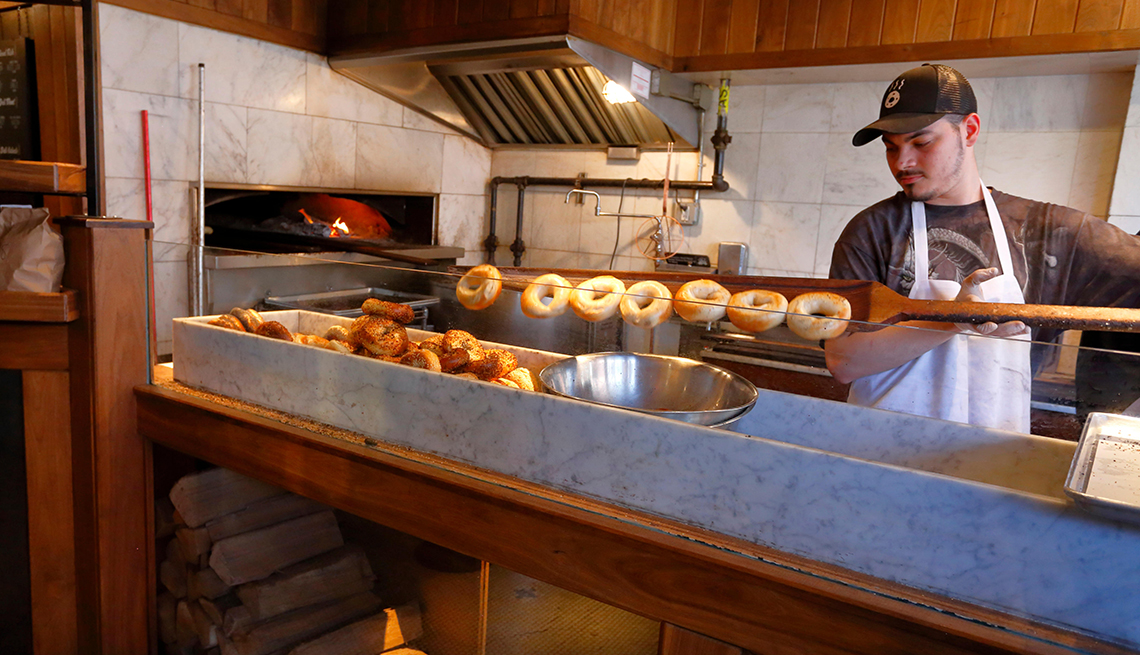 There is no substitute for a New York bagel ... ask any New Yorker. Some claim it’s the water that makes them unmatchable, and even New Yorkers argue about who makes the best. But many agree that they're tastiest eaten with a "schmear" of cream cheese and maybe a slice of lox. A traditional bagel is formed by hand and then boiled and baked, a process that should give it a crispy crust and a dense interior.

Made by the Amish in Lancaster County since the 1880s, shoofly is a gooey, supersweet pie made with brown sugar and molasses. Historians say it was first made as a cake, with pie crust added to make it easier to eat with your hands, and that it was typically eaten for breakfast (and may have attracted flies when left on the windowsill to cool). Dutch Haven is said to make the best in the county. Another iconic Pennsylvania food that must be mentioned: the Philly cheesesteak, the famously Philadelphian sandwich made with thinly sliced beef, onions and cheese on a sub/hoagie roll.

Tell us what we missed (or just got wrong) at #greatstatefood

The state’s shellfish delicacy starts with the quahog, a hard clam that flourishes in Narragansett Bay and is often used in clam chowder. For stuffies, chefs fill the shells with a buttery mixture of bread, minced clams, garlic, onions and sausage, and bake until toasty brown. They’re served in the shells, often with lemon and hot pepper sauce on the side. The stuffie epitomizes the state’s character, says David Dadekian, publisher of the Eat Drink RI newsletter. “There’s frugality in the bread stuffing and the eating of a relatively tough shellfish. … And Rhode Island’s rich immigrant heritage adds the sausage.”

Some who hail from New England call a cone or cup of frozen soft serve a creemee, but it’s not a "real" Vermont creemee without pure Vermont maple syrup and maple sugar. Although all creemees contain the basic dairy ingredients of milk, cream and sugar, most creemees use a high butterfat ratio that produces an ultra-luscious silky treat. You can find creemees at farm stands, ice cream shops and even gas stations, especially in summer.