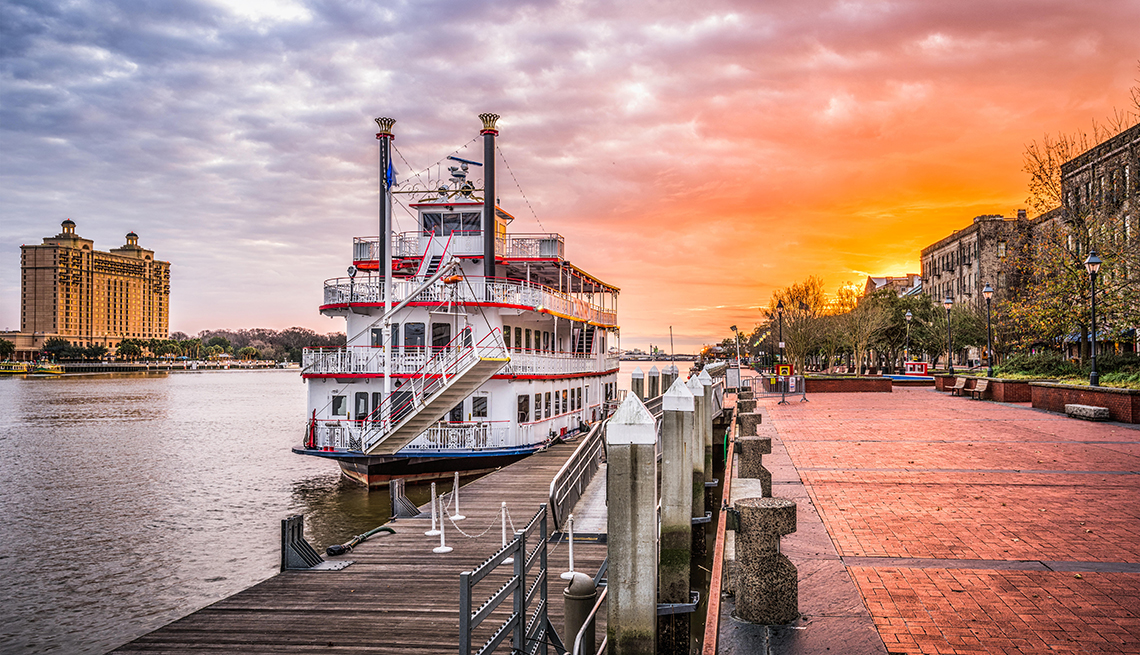 The Historic District of Savannah is best seen by foot. From its elegant churches and mansions — in Regency, Greek, Gothic Revival and Italianate styles — to its mammoth live oaks and green public squares, the city makes a comely Southern belle. Amble through the Historic District, plastic cup of booze in hand (called a “to-go cup”), courtesy of the open container policy. Admire its 22 squares, one after the other (thank you, Gen. Oglethorpe). Duck into such landmarks as the First African Baptist Church in Franklin Square, established in 1773 by a mostly enslaved congregation, or attend a worship service. Stop in Reynolds Square to admire the bronze statue of John Wesley, whose career started in Savannah as Oglethorpe’s secretary. Visit the antiques-filled birthplace of Juliette Gordon Low, the founder of the Girl Scouts of the USA. And pause to listen to whispered stories as you inhale the genteel way of life.

But don’t let that fool you. The old cobblestone streets and head-snapping historic architecture belie a hip, urbane outlook and youthful vibe, thanks largely to the Savannah College of Art and Design. Follow the smart set to boutiques and antiques shops, galleries and brewpubs, restaurants and cafes in converted century-old warehouses along the two-plus miles of River Street along the Savannah River and four-block-long City Market, between Ellis and Franklin squares.

Home to a permanent collection of 18th- to 20th-century American and European art, the Telfair Museums include two National Historic Landmarks — the Telfair Academy and the Owens-Thomas House and Slave Quarters — and the starkly modern Jepson Center, controversially designed by architect Moshe Safdie. The Owens-Thomas House is one of the finest examples of English Regency architecture in America. (Only Telfair and Jepson are wheelchair accessible.)

The prestigious Savannah College of Art and Design, one of the nation’s premier art schools, boasts a big footprint in this small town. The architecturally striking SCAD Museum of Art is a showcase for contemporary art. And the school offers a packed calendar of cultural offerings including lectures, films and exhibits — from clothing to interior design. Most are free and offer wheelchair access.

Savannah has its share of special-interest museums ranging from the Webb Military Museum, which honors U.S. servicemen from the American Civil War to Desert Storm, to the Ships of the Sea Maritime Museum, with a large collection of miniature ships, to the nation’s first American Prohibition Museum, so fitting for a city obsessed with spirits — both spectral and liquid.

Ways to Save: Super Museum Sundays usually occur the second Sunday of February, when all of the city’s museums and historic sites are free. Some museums offer discounts for the 65-plus crowd: The Telfair Museums and SCAD give those 65 and up $2 off; the Webb Military Museum, $1 off for people 62 and over.

Savannahians have always buried their dead with affection for beautiful and shady places. And the public Bonaventure Cemetery, four miles from downtown, is no exception. For a Southern Gothic moment, amble among its giant moss-shrouded oaks and forlorn sculptures as you spot the sad-eyed statue of little Gracie Watson, a 6-year-old who died suddenly in 1889, or the gravesites of songwriter Johnny Mercer or Pulitzer prize-winning poet Conrad Aiken. Free tours are available one weekend per month. Or join the two-hour Bonaventure Cemetery Tour to see the burial sites of the characters in John Berendt’s classic book about Savannah, Midnight in the Garden of Good and Evil. The company offers lightweight, portable walking canes and seating upon request, and its tour is wheelchair accessible.

Colonial Park Cemetery, opened in 1750 in the heart of the Historic District, is considered one of Savannah’s most haunted spots — with just as many spirits as tombs. Spooky myths aside, Button Gwinnett, a signer of the Declaration of Independence, is buried there, among other prominent Savannahians. And the cemetery has numerous benches for a quiet rest.

Boating defines the Old South as much as fried green tomatoes and cheese grits. Board a traditional paddlewheel riverboat from Savannah Riverboat Cruises (wheelchair accessible) for sightseeing tours of the Savannah River, some with lunch or dinner included. You’ll spot egrets and other shorebirds as you chug east along the Savannah River past Old Fort Jackson, home to one of the largest and oldest artillery pieces in the country.

Called “America’s most haunted city,” Savannah is replete with tales that are intriguing, if not downright chilling. According to lore, ghostly figures “traverse” walls and candles flicker off when lit and relit in restaurants. There are almost as many ghost tours and pub crawls as there are live oaks; try companies such as Ghosts & Gravestones, Sorrel Weed House, Ghost City Tours and Ghost Talk, Ghost Walk (most are handicap accessible) to visit ghoulish locations throughout the historic downtown.

Experience some of the city’s darkest stories — the suicide and murder at the Sorrel-Weed House, the bloody war on Madison Square, the ghosts that haunt 12 Oglethorpe Ave. — with Genteel & Bard Fine Savannah Tours. (Bring your own sage and holy water!) The company offers Savannah’s only audio-enhanced tours and welcomes handicapped visitors.

With its natural beauty, period architecture and shadowy evening ambiance, Savannah’s a proven stage for the film industry: Forrest Gump (1994), The General’s Daughter (1999), Glory (1989) and, most famously, Midnight in the Garden of Good and Evil (1997) were all shot here. Get into the mood by watching Midnight or reading the book, then sign up for a “book” tour with Savannah Heritage Tours, which brings it to life. It includes the Mercer Williams House Museum, home of the late antiques collector and historic restorer, Jim Williams, the story’s protagonist.

Get into the Savannah swing with a quintessential trolley, pedicab or horse-drawn carriage tour. Old Town Trolley Tours (some equipped with motorized lifts) offer a variety of options from hop-on hop-off tours to ghost- and Paula Deen-themed tours. Climb into one of Savannah Pedicab’s iconic two-passenger pedicabs — driver-pedaled open-air vehicles — for tours of half an hour and up. Or clip-clop your way through town for a narrated leisurely spin with Historic Savannah Carriage Tours or Carriage Tours of Savannah.

Bike tours show off Georgia’s oldest city from another perspective. Due to the maze of one-way streets, a guided tour, such as Savannah On Wheels, prevents you from biking in the wrong direction if you’re on your own.

Ways to save: Book online for a 10 percent discount from Savannah Ghost Tours and Old Town Trolley Tours. Free Savannah Walking Tours charges nothing for a 90-minute itinerary (just pay a tip).