En español | Ever since Apple launched the iPad, consumer electronics makers have been foaming at the mouth to get competitive products to market. At this year's Consumer Electronics Show, manufacturers announced plans for more than one hundred new tablets, many with a version of Google's Android operating system optimized for these devices. But now that many are finally shipping, is any going to bruise the Apple?

We looked at offerings from seven makers, by no means the full scope of the tablet universe, but it will give you some idea of what's out there. 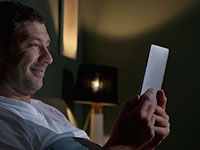 Best known for the Thinkpad line of laptops it bought from IBM, Lenovo is ambitiously introducing three tablets. The Thinkpad Tablet, which is just starting to ship, uses Google's Android operating system. It is largely geared for business and has an available keyboard along with a host of business applications. The IdeaPad K-1, which is available now, uses Android and has a textured back that prevents it from slipping. Also coming this fall, the IdeaPad P-1, which uses a tablet version of Windows 7.

Unlike the other players in the category, Archos traditionally makes media players that let you take tons of movies and videos on the go. The Archos tablet is clearly designed as an entertainment device, equipped with a stand so you can set it on your desk to watch movies. It uses an earlier version of Android, which is not optimized for tablets. It has Wi-Fi connectivity.

The Asus Transformer takes its name from the available docking keyboard, which can combine with the tablet to make a single, still relatively thin unit with lots of ports, storage and extra battery life. And you can use just the tablet portion by itself, which still compares favorably to other Android tablets. It is also a Wi-Fi only device. Asus, too, is hedging its bets, also offering a larger Windows based slate machine that's a little beyond the tablet category in size, weight and screen size.

The first tablet offering from Research In Motion has won praise for its quick Internet browsing and multitasking capability. But, RIM has designed it so that you need a Blackberry phone to have full access to email, calendar and contacts. It has its own operating system, called QNX, which is also used in jet fighters. Go figure. It is the smallest of this group, with a 7-inch diagonal screen. The Playbook promises support for Android applications, but for the moment you're limited to the smaller selection of Blackberry apps.

The G-Slate is sold through T-Mobile, and features 4G data capability. It also is the only tablet I've seen that has the ability to take 3D videos and play them back. You will need 3D glasses, sold separately, and the 3D capability may be more gimmick than useful.

Motorola's Xoom, available through Verizon, wins high marks for fast Internet browsing and multitasking. It has best-in-class battery life, and will be upgradeable to 4G data service and Android's newest operating system.

Acer's tablet is a Wi-Fi only device. The screen features one of the widest viewing angles in the class. It is one of the few tablets to offer a full size USB port, which makes attaching external devices much easier, including external storage for more movies and video.

Next: Use this checklist to buy the right tablet. >>

While many of these tablets are comparable, here are a few things to look for:

iPad Competitors at a Glance

Requiem for a Middleweight

Finally, if you've been watching television this summer, you almost certainly saw the lavish advertising campaign that Hewlett Packard used to launch its first consumer tablet, the HP TouchPad. The machine has some interesting features, including a software program called "Just Type" that is a cross between search and word completion on steroids. But instead of using Android, or even Windows, HP decided to go with the operating system called Web OS that it bought as part of Palm Computing a year earlier. And while it won some technical acclaim, it never picked up the community of developers needed to build a successful base of applications. Despite the ads, consumers quickly figured this one out and turned away in droves. After less than two months on the market, HP pulled the plug on the TouchPad, and on all the Palm devices running Web OS.