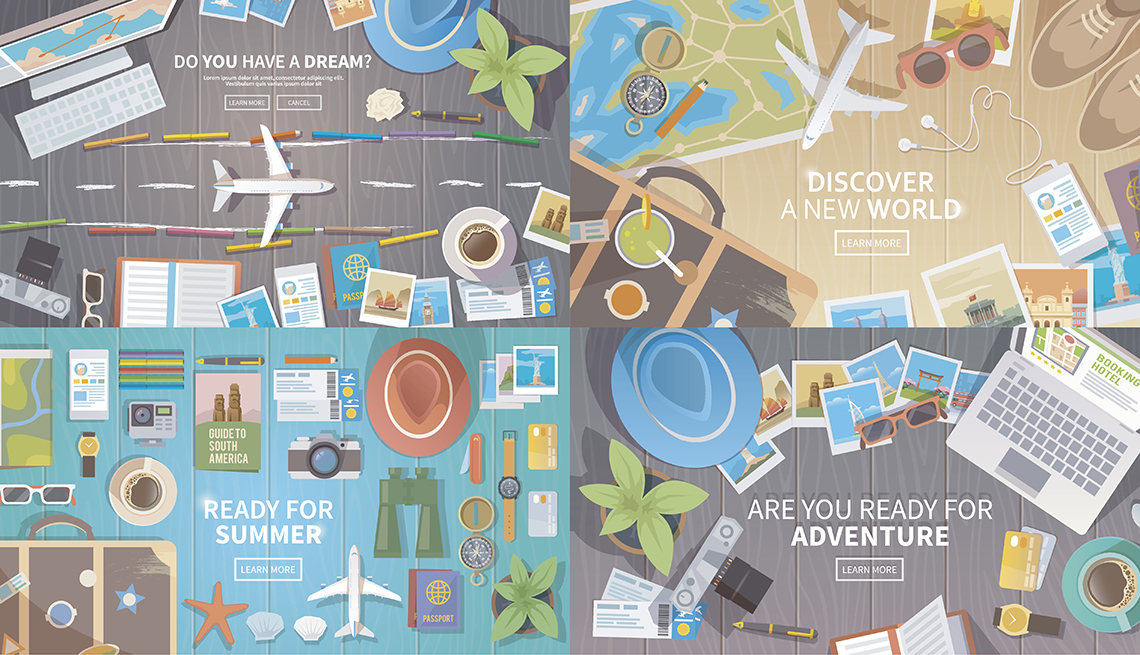 Americans love to travel as much as ever, but results from a recent AARP Travel survey reveal some noteworthy trends in preferences and other areas. For one: they’re increasingly wanting their trips to be true escapes that leave them feeling recharged.

Baby Boomers expect to take four or five leisure trips next year, spending almost $6,400 on travel expenses―the same or more than they spent in 2017, according to a national survey of adult travelers conducted by AARP, 2018 Travel Trends.  Millennials estimate they will shell out about $6,800 for vacations and Gen Xers $5,400.

Just what motivates people to hit the road? About 57% of Boomers travel to spend time with family and friends, the same amount as last year. But in this new survey, 49% of Boomers say they travel to relax and rejuvenate (up from 38% in 2017) and 47% are looking for a getaway from everyday life (up from 39%).

The year ahead looks like a busy one for many Boomers―and they are still making plans:

For those who travel in the U.S., trips are mostly summer vacations, multi-generational travel or weekend getaways.  About 66% of Boomers travel domestically by plane and 60% by car.

For Boomers, going abroad is more likely a “bucket list” trip (22%), the online survey found.  As for ways to experience a new destination, increasingly travelers abroad like the idea of touring with a local in 2018 (49%) compared to 40% in 2017, the study revealed.

Once they’ve landed, 62% of Boomers stay in hotels or motels.  A common reason they choose this over renting private homes: they prefer the amenities, like concierge and room service, offered at a hotel.  Cruises make up over one-third of international travel so a ship cabin is the second-most popular international accommodation, according to the study.

Those who rent private homes say they are drawn to the additional amenities such as a kitchen or washer/dryer.  Others feel they are more affordable and offer more space.  Still, 10% opt for Airbnb or VRBO types of accommodations, 6% to 8% prefer bed-and-breakfasts and 2% to 6% plan to stay in company-managed private homes. The survey found Millennials are more open to staying in alternative accommodations, such as private home rentals, than Boomers.

The Question of Unplugging, and Other Getaway Decisions

The AARP 2018 Travel Trends survey discovered that some attitudes toward vacation varied by age. While 68% of employed Boomers with paid time off anticipate taking all or most of their employer-provided days off in 2018 (an increase from 59% last year), 79% of Millennials expect to use all/most of theirs. Boomers don’t often mix business with pleasure. Just 25% of these Boomers tacked on an extra day or two to a business trip for themselves last year, but 40% of Gen Xers and 53% of Millennials did.

What about unplugging while away? It can be hard to go off the grid, but just how hard varies by generation, among those who are working and have vacation days.

Cost is the top reason Americans of all ages say they don’t travel more, the study found.  For Millennials and Gen Xers, work responsibilities and family obligations were the next most common reasons cited.  Boomers said health and weather were other barriers to travel in 2018.

The AARP Travel online survey was conducted among 1,728 males and females age 20+ in September 2017. Respondents had taken at least one trip 50 miles or more away from home with a two-night stay in the past two years. They also were users of online travel sites and intended to take a leisure trip in 2018. Final data have been weighted to the U.S. Census for analysis, by generation. For more information contact Vicki Gelfeld at VGelfeld@aarp.org.