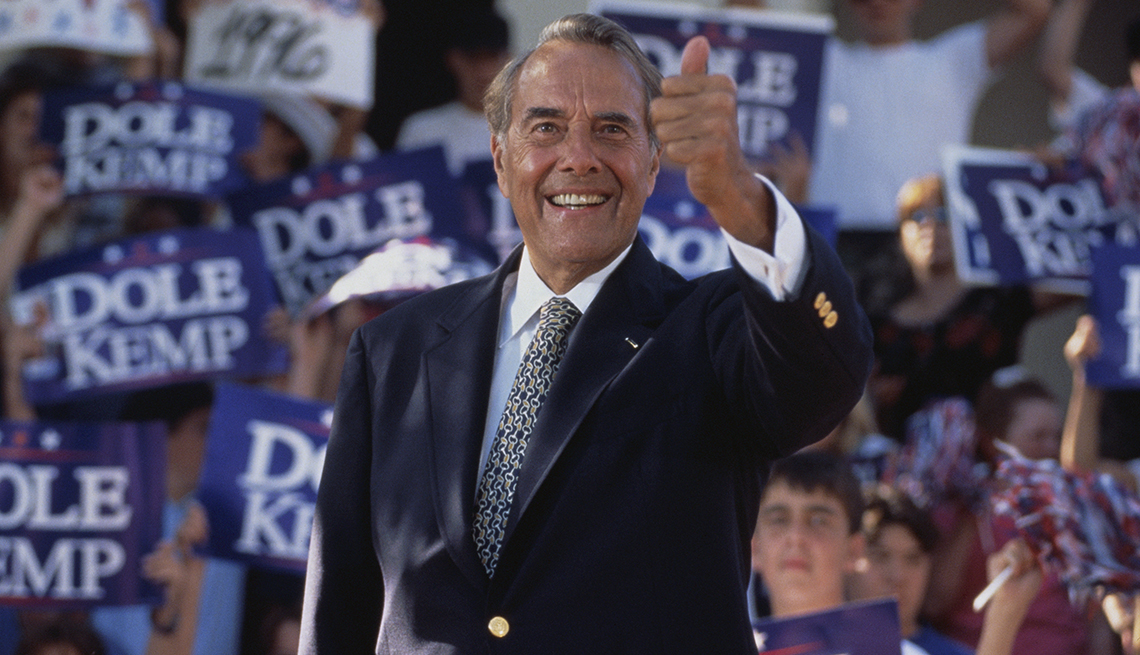 When Bob Dole was a young soldier fighting in World War II, his parents received a telegram that broke their hearts: “THE SECRETARY OF WAR DESIRES TO EXPRESS HIS DEEP REGRET THAT YOUR SON 2 LT DOLE ROBERT J WAS SERIOUSLY WOUNDED IN ITALY 14 APRIL 1945 ...”

“Seriously wounded” did not begin to cover it. His injuries were so grievous that the small-town boy from Russell, Kansas, would be awarded two Purple Hearts and two Bronze Stars. Dole was leading an army platoon ordered to capture a hill when he dragged a radio man into a foxhole and was hit in the right shoulder by a shell fragment, which fractured his spine and neck. He lay face down in bloody dirt, thinking his arms had been blown out of their sockets.

They were still there. But his right arm would forever hang limp and atrophy by two-and-a-half inches. His right hand proved useless, drawing into a claw. And he’d have sensation in only a couple of fingers on his left. He had once been so strong that he’d hauled a Harley-Davidson motorcycle up three flights of stairs at the University of Kansas as a prank. Now he was permanently disabled.

“When you join that group,” Dole told the Washington Post in 1996, “you say, ‘Why me?’ But after you’ve been there awhile, you have to decide what you’re going to do with your life.”

Dole, who died Dec. 5 at age 98, made the choice to serve others. The Republican leader of the U.S. Senate from 1985 to 1996, he ran against incumbent President Bill Clinton in the 1996 presidential election, and was the last World War II veteran chosen to be the presidential nominee of a major party. Born July 22, 1923, he was also the oldest first-time presidential nominee, at age 73 years and one month.

At the news of Dole's death President Joe Biden ordered U.S. flags at the White House, federal buildings and grounds, military posts, naval stations, embassies and consulates to be flown at half-staff until Dec. 9 to honor the former senator. House Speaker Nancy Pelosi also ordered that the flags at the Capitol be lowered.

"Bob was an American statesman like few in our history. A war hero and among the greatest of the Greatest Generation," Biden said in a statement that paid tribute to his bipartisanship and especially his work to get the Americans with Disabilities Act passed.

"A bright light of patriotic good cheer burned all the way from Bob’s teenage combat heroics through his whole career in Washington through the years since," Senate Minority Leader Mitch McConnell, (R-Ky),  said in a statement. "It still shone brightly, undimmed, to his last days."

AARP CEO Jo Ann Jenkins said on Twitter that "Sen. Bob Dole's passing marks the loss of another U.S. hero." AARP has worked closely with the Elizabeth Dole Foundation, especially to help provide respite relief to veteran and military families caregivers. Jenkins called Dole "a warrior who loved his country and lived a life of service."

The presidential election defeat hit Dole hard, especially as he also had been the Republican Party’s vice-presidential nominee in the 1976 election, when Jimmy Carter won over Gerald Ford. “I don’t know how many people run for vice president and president and lose both,” cracked the man who often used humor and deadpan delivery to blunt the sharper edges of his life.

“I was thinking on the way down in the elevator: Tomorrow will be the first time in my life I don’t have anything to do,” Dole remarked in his election-night concession speech. But within hours, he was back on TV as a frequent and charming talk show guest, often referring to himself in third person (to the delight of comedians), and musing about life after public office: “Elizabeth’s back at the Red Cross, and I’m walking the dog.” 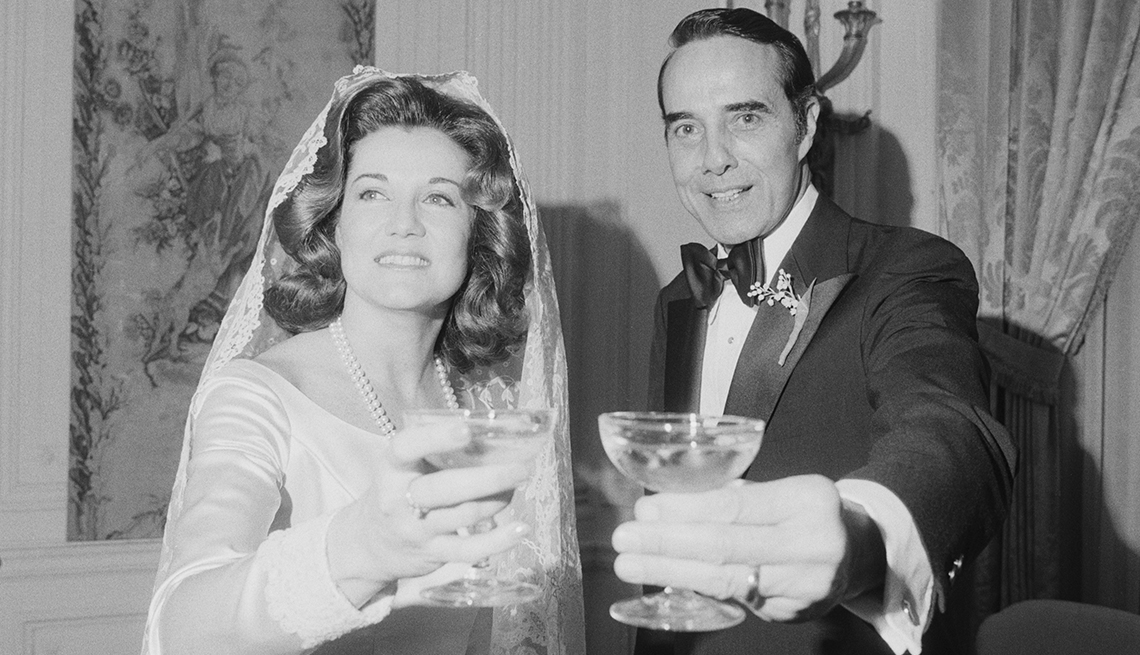 Bob Dole and his wife Elizabeth give a toast on their wedding day on December 6, 1975.
Bettmann/Getty Images

“Elizabeth” was, of course, his second wife and stepmother to his daughter, Robin, from his first marriage. The couple married in 1975 after a three-year courtship. “Liddy” Dole had her own impressive bona fides, leading the American Red Cross after serving as secretary of transportation under President Ronald Reagan (who awarded her husband the Presidential Citizens Medal in 1989), and secretary of labor for President George H.W. Bush. (She would go on to become a North Carolina U.S. senator.)

In a joint interview in 2019 for NBC’s Today, she recalled that her handsome suitor didn’t ask her out until their third phone conversation.

“I really liked that a lot, because I realized he’s not some guy chasing women around Capitol Hill,” she said.

“I never did that — couldn’t catch ‘em anyway,” he joked.

The two were a formidable Washington power couple, but it was his kindness that really attracted her, she said. “I love his compassionate heart. And the fact that he loved to feel that each day he could make a difference for at least one person in need.”

For that, President Clinton awarded Dole the Presidential Medal of Freedom in 1997, citing his work “championing the interests of his state’s hardworking farmers, helping the disabled through leading the way to the Americans with Disabilities Act, extending the Voting Rights Act, playing a key role in the National Commission on Social Security Reform, and always, always supporting the leadership of our country.”

Dole would cite saving Social Security as his greatest achievement. But he was also proud of his work raising millions of dollars for the National World War II Memorial in Washington. After it opened in 2004, he spent most of his Saturdays there, welcoming veterans and their families. His book, One Soldier’s Story: A Memoir, was published in 2005.

In 2018, Congress placed Dole in the company of George Washington and Mother Teresa in bestowing on him the nation’s highest civilian honor, the Congressional Gold Medal, for his service in battle (“He knows about grit,” said President Donald Trump at the award ceremony) and his decades in the House and Senate. “Bob Dole was known for his ability to work across the aisle and embrace practical bipartisanship,” read the legislation.

The following year, Congress unanimously passed a bill that promoted Dole to the rank of U.S. Army colonel for his heroism in the war.

Dole faced myriad health challenges through the decades, including hip replacement surgery and prostate cancer. After the latter, he made a tasteful commercial for Viagra (he had been a test subject for it), and then a Pepsi commercial that spoofed the Viagra ad. Though some called his personality “grouchy,” he took all ribbing in stride, even an episode of The Simpsons in which he and Bill Clinton were abducted by aliens. (“Bob Dole doesn’t need this,” his character laments.)

In 2005, he suffered bleeding inside his head, which further limited the use of his good arm and hand. When his one-time rival, President George H.W. Bush, died in 2018, the nation watched in powerful emotion as the 95-year-old Dole struggled to rise from his wheelchair and haltingly saluted the flag-draped coffin.

“I wanted to pay my respects ... stand up and maybe bow my head,” he said. “I didn’t go there with the intent to salute, but I did.”

Respect and loyalty mattered. When Dole was first injured, the folks in Russell, Kansas, dropped money in a cigar box at Dawson’s Drugstore to help pay his medical bills. Dole kept that box inside his desk drawer all his life.

Decorum mattered, too. And certainly stoicism. In public, he was routinely seen clutching a black felt-tip pen, for two reasons: It discouraged people from trying to shake his bad hand, and it kept his fingers from splaying open, thus pointing out his infirmity.

He asked to be buried with it.

Editor’s note: This story has been updated to reflect tributes to the late senator.

Nearly 900 photos recently donated to the Library of Congress