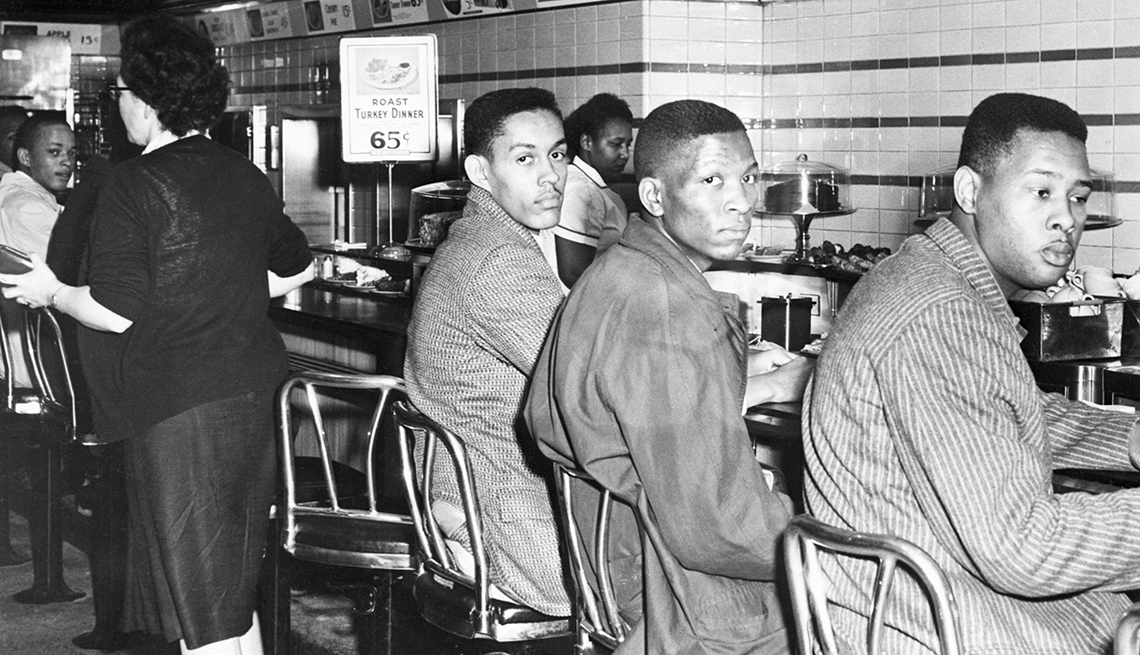 African American students at North Carolina A&T College participate in a sit-in at a Woolworth's lunch counter reserved for white customers, in Greensboro, N.C., in 1960.

Throughout the civil rights movement, ordinary people have contributed in countless ways, becoming part of its legacy and accomplishments. Nearly 14 years ago, AARP ventured out on a 70-day bus tour, through 22 states, to gather some stories, which resulted in a collection of thousands of oral histories and photographs. In collaboration with the Leadership Conference on Civil Rights, AARP donated those stories to the Library of Congress to create the Voices of Civil Rights exhibition. In honor of Martin Luther King Jr. Day, we are highlighting and updating a few of the stories housed there.

A living witness to civil rights

Johnnie Pearl Young saw the aftermath of the tragic murder of civil rights leader Medgar Evers by a white supremacist on June 12, 1963. Young lived across the street from Evers, who was shot while returning home from an NAACP meeting, and her husband helped to rush him to the hospital. Young describes herself as "a living witness to the civil rights movement."

Evers was the first field secretary for the NAACP in Jackson, Miss., where he fought segregation at the University of Mississippi and other forms of discrimination. He faced numerous threats before his assassination and was only 37 when he was killed. His widow, Myrlie, fought for 30 years to bring his killer to justice, and white supremacist Byron De La Beckwith was finally convicted in 1994, an event that was depicted in the 1996 film Ghosts of Mississippi.

Evers knew that his civil rights activism might lead to his death, Young told AARP. "He knew exactly how it was going to happen. … He said, 'All of these things will be changed if I pay the price.' "

Young still lives in Jackson, and on June 12, 2017, she helped to mark the 54th anniversary of Evers' death at a ceremony at the site where he died.

Don't stereotype by virtue of age or color

While he was in college, Franklin McCain, who passed away in 2014 at age 73, participated in a lunch-counter sit-in at a Greensboro, N.C., Woolworth's to protest segregation.

"I certainly wasn't afraid," McCain said in an interview with NPR. "And I wasn't afraid because I was too angry to be afraid. If I were lucky, I would be carted off to jail for a long, long time. And if I were not so lucky, then I would be going back to my campus, in a pine box." That event has been credited with igniting a chain of sit-ins during the Jim Crow–era South that was a key part of the civil rights movement.

During that first sit-in, McCain and his classmates were denied service and told by the manager that they weren't welcome, and a police officer observed the protesters while swatting his hand with his night stick, although the incident never turned violent. While the young men sat there, an older white woman came over and whispered to them, "Boys, I'm so proud of you."

Expecting the woman to deride them for their protest, McCain told AARP that he was stunned by her response and learned not to "ever, ever stereotype anybody in this life by their age, color, what they look like or where they are."

The day after their sit-in, another 20 students joined them, and 300 more turned up by the end of the week, according to WUNC in North Carolina. Word spread, and within two months, 54 cities spanning nine states had similar movements. The original lunch counter in Greensboro desegregated six months after that. Fifty years later, a civil rights museum opened at the location of the infamous Woolworth's.

'Our house was on fire'

Bettie Dahmer’s family home in Hattiesburg, Miss., was attacked by the Ku Klux Klan when she was just a child. Her father, voting rights activist and NAACP leader Vernon Dahmer, was killed in the attack, and Bettie and other family members were injured.

During the mid-1960s, Mississippians were still required to pay a poll tax in order to register to vote. So in 1966, Dahmer, a successful farmer and businessman, publicly offered to pay that tax for black people who couldn't afford it, NPR reports. The night he made the announcement, his house was firebombed while he, his wife and three of their children were at home.

"I recall my mother waking me up, and our house was on fire," Bettie Dahmer told AARP. "I did have a hard time as a child trying to come to grips that there were people that were mean and cruel enough in this world to kill me as a 10-year-old child ... because my daddy was involved in civil rights."

Some of the last words Vernon Dahmer said were, "If you don't vote, you don't count,"  his widow, Ellie, told NPR. Those words are engraved on his tombstone.

Additional stories and images from the Voices of Civil Rights project are available at the Library of Congress' Online Exhibit.

This article was originally published on February 16, 2018.