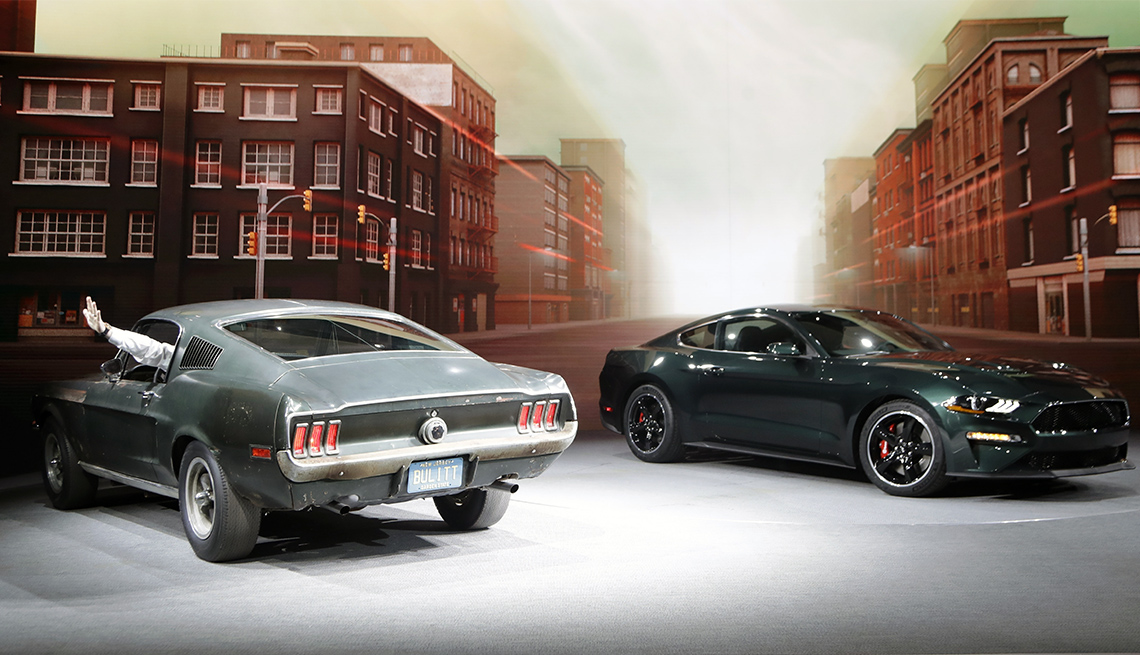 Ford introduces the new 2019 Mustang Bullitt, right, next to the original, at the North American International Auto Show.

In “gearhead” circles, it’s known as the Bullitt Mustang: A mean, green 1968 Ford Mustang GT fastback that Steve McQueen famously drove in the movie that gave the car its name.

Now, 50 years after it first appeared on screen, the Bullitt Mustang has returned to the public eye — and one insurer estimates it is worth millions of dollars.

Ford unveiled the car at the North American International Auto Show in Detroit, alongside a limited edition modern Mustang that’s being built as a tribute. “This is probably the Holy Grail, if there is one,” Mark Gessler, president of the Historic Vehicle Association, told the Detroit Free Press about the original Mustang. “It’s one of the most important artifacts of the 21st Century in terms of automotive history. It is a national cultural treasure.”

McKell Hagerty, CEO of Hagerty Classic Insurance, told the Free Press the car likely is worth more than $4 million.

Two cars were used in the film, one of which went to a salvage yard (which is understandable if you’ve seen the movie's famous chase scene). The other slipped into a private buyer’s hands in 1974 and disappeared from sight.

Warner Bros. studio, which made the movie, initially sold the second car after production. Robert Kiernan Jr. purchased the car in 1974 after seeing a classified ad for it in Road & Track magazine. And the car went out of sight for more than 40 years, kept in a garage in family hands.

“You know, it was never our intention to keep this car a secret from everybody,” Kiernan’s son, Sean Kiernan, said in a statement released by Ford. Sean Kiernan inherited the car in 2014 after his father died, and he contacted Ford about the vehicle two years ago.

That eventually led to this week’s unveiling. Kiernan said he had no plans to sell the car.

Like the original, the new Mustang is stripped of badging and is decidedly reserved in exterior appearance.  It also has a brutal amount of power: 475 horsepower from a 5.0-liter V8 engine with a top speed of 163 miles per hour (the original had a 390-cubic-inch engine and 325 horsepower, according to classic car site itstillruns.com).

Bullitt, a thriller set in San Francisco, was one of the iconic movies of McQueen’s career. A car chase scene in the film, set on the city's hilly streets, commonly is cited as among the greatest ever filmed.