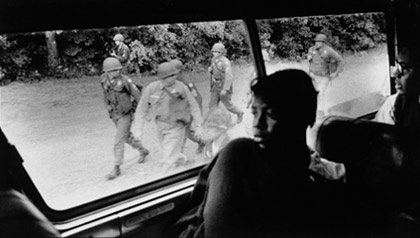 Freedom Riders travel by bus from Montgomery, Ala., to Jackson, Miss., escorted by members of the National Guard.

The civil rights movement was a largely peaceful revolution, but a revolution nonetheless. This was nothing less than a great citizen's movement, harnessing the energies of blacks and whites alike. The first stage of the movement was led by well-educated, middle-class black ministers, skilled at taking the white man's Christianity — which had become their Christianity as well — and using it against him. The movement forced ordinary white citizens to examine their consciences, even as it summoned black people to reject the condition of their lives.

The second stage was something of a children's crusade as the students at black colleges began to drive it. That happened in 1960, when six long years after the Supreme Court's decision in Brown v. Board of Education — and with no change apparent in their lives — they started the first sit-in demonstrations (lunch-counter protests) in Greensboro, N.C., and Nashville, Tenn. A year later, they took it even farther, venturing into vastly more dangerous venues in the Deep South.

That historic demarcation point — when the students moved past the ministers — came in spring 1961. Some genteel middle-class protesters from the Congress of Racial Equality (CORE) headed out on Freedom Rides, in which racially mixed bus passengers tested allegedly integrated facilities across the South, and were violently put down by the Klan. The senior ministerial leaders, stunned by the ferocity of the violence, wanted no part of additional Freedom Rides. But the student leadership represented by the Student Nonviolent Coordinating Committee (SNCC) decided to resume them — to go ahead into Alabama — over the resistance of their great mentors, the black ministers.

The ministers, of course, were apprehensive about sending any young person on so dangerous a mission. Would they send their own children on it? That was the acid test. The answer was surely no. But the students, fresh from their victories in the sit-ins, felt differently. Student leader John Lewis, then only 21 and a Bible student at Nashville's American Baptist Theological Seminary, asked the ministers: "If not us, who?" Then he added, "If not now, when?"

When the ministers refused to finance the purchase of bus tickets, the students borrowed the money from a numbers man in Nashville. As they took the next courageous step — bringing the battle to the most recalcitrant parts of the South, what they called The Valley of the Shadow of Death — they had no protection from their enemies. I still think of them as being like the men who went ashore at Normandy on D-Day in June 1944, except that they were doing this for their own rights on native soil and carried no weapons.

Their hope was, in the beginning, a fragile one. Wherever they went, it was clear to them by then, the media would go as well, and where the media went, the federal government, however reluctantly, would have to follow. And gradually that happened, even though President Kennedy was loath to challenge the powerful senior Southern congressional leadership of his own party and referred to the students at first as a "pain in the ass."

It was probably the best-run volunteer movement of modern times — and amazingly democratic. The people who signed on seemed to come together as much by accident as anything else; those pulled into it often had little inkling, as they first came aboard, of how much it would change not merely their country, but their own lives.

Above all the civil rights movement reflected a deep yearning on the part of ordinary people for a more just America. It was essentially a struggle to define the national conscience in a predominantly white, middle-class country — and, in the process, to undo the darkest chapter in American history: that of slavery. This was not just a test of the quality of life in Mississippi and Alabama, it became increasingly clear, but the ultimate test of the nature of democracy in America itself.

The movement created its own momentum: The greater the risks the young people took — and the more cruel and violent the resistance they encountered — the more the rest of the nation swung to their side. The cream of young Southern black students was met by bombs, guns, cattle prods and attack dogs. As that happened, the rest of the nation often had to make choices it would just as soon have not made.

This essay is excerpted from David Halberstam's foreword to My Soul Looks Back in Wonder: Voices of the Civil Rights Experience (AARP/Sterling Publishing, 2004).

After graduating from Harvard in 1955, Halberstam took his first newspaper job on a Mississippi daily. He covered black student protests against segregation for The Nashville Tennessean and won a Pulitzer Prize for his reporting from Vietnam. His book The Children profiles the young people who took the civil rights movement into the Deep South. He died in a car accident in 2007 at age 73.