Lothaire Scott Green didn't get a chance to walk across the stage and pick up her master's degree in elementary education at the University of Arkansas' commencement ceremony in 1951. Jim Crow segregation laws prevented her from attending. Instead, she unceremoniously received the long-awaited diploma in the U.S. mail. 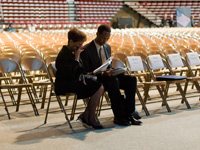 Treopia Washington waits to receive her mother's diploma from the University of Arkansas.

But on Saturday, 60 years later, her daughter, Treopia Green Washington of Baltimore, did get to take that walk and receive the degree in her mother's honor.

Back in 1951, some universities in the South offered graduate studies to African American students but forbade them from taking courses on their segregated campuses.

Although Fayetteville is home to the main campus of the University of Arkansas, Green attended classes in her hometown of Little Rock. Washington says she remembers her mother attending those classes in trailers.

"My mother would never have complained," says Washington of her mom's reaction to the university's mandate. "She was a quiet warrior. She had a quiet, dignified, cultured way. A 'Steel Magnolia' … Ernest and I called her this."

Passion for fashion and education

Yet Lothaire Green would never attend her own graduation from the University of Arkansas. Having already received a bachelor's degree in home economics in 1920 from Wilberforce University in Ohio, she had worked as an educator for many years. A lover of fashion and clothing design, she taught home economics in the Little Rock public schools.

Washington reminisces about her mother's "passion for fashion." "She was ahead of her time. In a later time, she could have been one of the top people in fashion."

Embroidery, appliqué, tiered skirts, women's suits trimmed in Persian lamb wool — nothing overmatched Green's talents. "The more intricate the design, the more she seemed to enjoy making it," her daughter recalls. "The outfits were stunning."

Though Green adored teaching home economics and later first grade, she yearned for a master's degree. Her desire led her to the University of Arkansas to study elementary education. However, Green's excitement in reaching her educational goal took an unhappy turn at the very end of her graduate studies.

"I was with her the day the doorbell rang," says Washington, who was 14 at the time. "It was a postman with a package [that contained] her tassel, her diploma and a letter that congratulated her, but also stated that she would not be able to attend commencement."

Washington remembers the hurt in her mother's brown eyes: "She read it, handed it to me to read, then tossed it in the trash can. She walked away, and never said a word. I never forgot it."

Quest to right a wrong

For years she remembered that pained look, long after her mother's death in 1976. Washington had never shared the moment with anyone else, including her two brothers, until one day this past January.

That day she felt inspired to share her mother's story while in her office handling business as vice president of partnerships and minority affairs at the National Board for Professional Teaching Standards in Arlington, Va. She visited the University of Arkansas website and read the bio of the current chancellor, Dave Gearhart.

"I got a gut feeling, a positive vibe," Washington says. "He seemed very open. The article sent a message that he was an approachable person."

Next: 'He wanted to do something to make it right.' >>

Washington sent Gearhart an email. "I introduced myself, told him who my brother [Ernest] was. I told him about the look of hurt and disgust in my mother's eyes. I had always wished that one of us could receive her degree in the manner that was denied her."

She heard from his office within two days. "He thanked me for my email," Washington says. "He apologized. He said the university is not the same as it was then. He wanted to do something to make it right."

Soon afterward, the vice provost of diversity, Charles Robinson, held a conference call with Washington and her brother Ernest. The Greens were officially invited to this year's commencement for a special presentation in honor of their mother.

"The university is happy to offer some degree of correction to this past wrong," says Robinson. "We are a much more inclusive university now, and we attempt to ensure that all of our students know that they are important members of the Razorback family."

Gearhart says that it's likely that Green was not the only person to be denied her right to participate in commencement, "but her family's participation represents our interest in — and our public commitment to — acknowledging that past."

The past met the present at Saturday's commencement when Washington, accompanied by her son, Todd, accepted her mom's honorary diploma. She received a standing ovation from the crowd that included 4,000 graduates.

"I'm overwhelmed," Washington says. "I really didn't expect anything like this. Extremely delighted. Delighted that the chancellor and the university 'got it.' This has demonstrated to me these are people who evidently care."

Next: Followed in her mother's footsteps. >>

Washington, who followed in her mother's footsteps, has enjoyed a successful career in education. After teaching in the Baltimore City Public Schools, she served as education coordinator for the NAACP and later was appointed by President Clinton to the White House Initiative on Historically Black Colleges and Universities.

Yet, with her accomplished résumé, Washington didn't embark on this new endeavor to change the world. "My intent was not to start a revolution. It's kind of unbelievable that it's grown to this," she says.

And what her mother would say if she were alive today? "She was not the person to seek attention. She would smile and shake her head and say, 'Treopia, you know this is not necessary. You know you shouldn't have done this.' I would say, 'I know, but I did.' "

Carla Adair Hendricks is a writer in Conway, Ark.