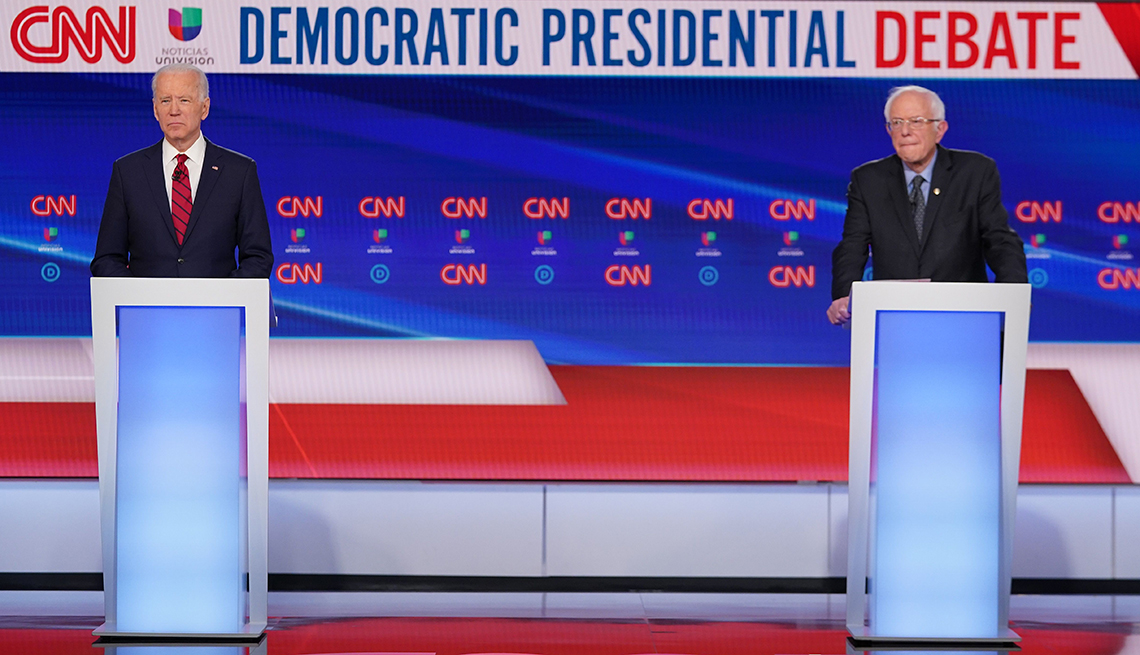 En español | How the last two major Democratic hopefuls would handle the coronavirus if they were president and how their health care plans and views on Social Security differ dominated the first one-on-one debate Sunday between former Vice President Joe Biden and Vermont Sen. Bernie Sanders.

The coronavirus affected Sunday's debate even before it began: It was moved from Phoenix to an audience-free CNN studio in Washington, D.C. The debate came two days before Tuesday's four key primaries — in Arizona, Florida, Illinois and Ohio – were scheduled. But Ohio Gov. Mike DeWine Monday announced that he wanted to postpone his state’s primary to June 2 because of coronavirus concerns.  Officials in the other three states continued to say that their contests will go forward despite the outbreak and that steps will be taken to sanitize surfaces at polling places. Louisiana and Georgia have postponed their primaries because of the virus, Louisiana from March 17 to June 20, and Georgia from March 24 to May 19.

Both Biden and Sanders stressed the urgency of testing more Americans for the coronavirus and making sure that people do not suffer financially because their workplace has shut down or they have to remain home with children whose schools have closed.

"I would make sure that every state in the union has at least 10 places where they had drive-through testing arrangements,” Biden said, adding that he would mobilize the Department of Defense, working with the Federal Emergency Management Agency, to set up 500-bed temporary hospitals to deal with people who become infected as the number of cases surges.

"I want every person in this country to understand that when you get sick, you go to the doctor, that if you have the virus that it will be paid for,” Sanders said, adding his concern that hospitals have the ventilators they need.

Right before the debate, the Centers for Disease Control and Prevention recommended that for the next eight weeks gatherings of 50 or more people be canceled. Asked whether there should be a “national lockdown,” Biden said he would turn to the medical experts for such a recommendation. Both candidates said they would bring in the military and/or the National Guard to help respond to the pandemic.

Biden and Sanders defended their records on a number of issues, including Social Security. “I am saying that you have been on the floor of the Senate time and time again talking about the need to cut Social Security, Medicare and veterans’ programs,” Sanders said to Biden.

"Well, it's not true,” Biden said, adding that the comments Sanders was referring were in the context of “everything being on the table” in dealing with the deficit decades ago. But, Biden said, “I did not support any of those cuts in Social Security.” Asked by one of the moderators about an op-ed he said Sanders wrote in 1996 as a House member saying that incremental adjustments would have to be made in Social Security taxes and benefits, Sanders said the “adjustments” he advocated were increasing cost-of-living adjustments.

The significant differences between Biden and Sanders over how to provide affordable health care to all Americans were highlighted Sunday night. Sanders pivoted from the conversation about coronavirus to push for his single-payer “Medicare for All” plan, while Biden continued his criticism of Sanders’ plan, saying it couldn't be passed in Congress and would cost too much.

Biden said his vision of the future of health care is to build on the Affordable Care Act (ACA) and provide a public option that would allow people to buy into the Medicare program. His plan, Biden said, would restore the cuts made to the ACA, provide for lower drug prices, eliminate surprise billing and invest $50 billion in dealing with such diseases as diabetes, Alzheimer's and cancer.