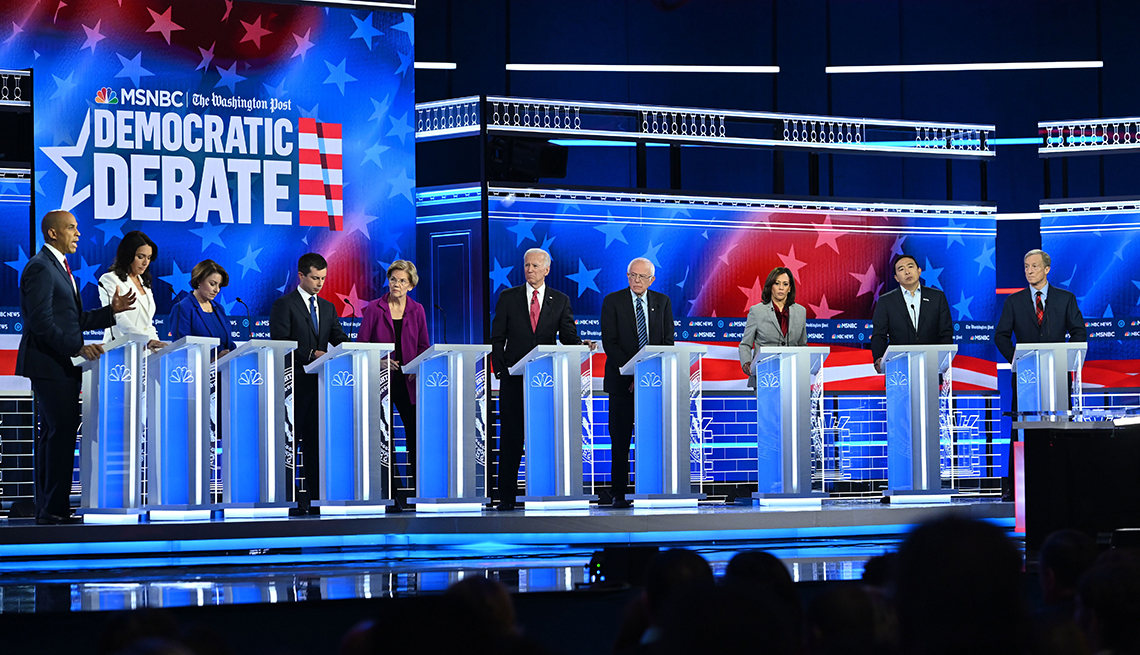 En español | Health care, including “Medicare for All,” paid family leave and how to bring a divided nation back together were among the topics 10 Democratic presidential candidates debated Wednesday in Atlanta.

"The way we achieve our goals and bring our country together,” said Sen. Elizabeth Warren of Massachusetts, “is we talk about the things that unite us.” Sen. Cory Booker of New Jersey said his charge as president would be to “see a nation that has so much common pain, to channel that back into a sense of common purpose.” And former Vice President Joe Biden said: “It's about civility. We have to restore the soul of this country."

A 2018 AARP national poll found that among voters over 50, 73 percent were worried about how divided America has become. And in 20 polls in states and individual congressional districts before the midterm elections, about half of all those surveyed cited political divisiveness as a top concern.

While there was agreement Wednesday night about the need for unity, the candidates showed continued differences on issues, particularly on health care. They focused on the divide between those who want to expand the current system and those who would dismantle private insurance.

Medicare for all who want it, said South Bend, Indiana, Mayor Pete Buttigieg, “is something that as a governing strategy we can unify the American people around.”

Buttigieg said creating the kind of government-run Medicare for All health system supported by candidates Warren, Rep. Tulsi Gabbard of Hawaii and Sen. Bernie Sanders of Vermont would be “a divisive step of ordering people onto it whether they want it or not.” Sen. Amy Klobuchar of Minnesota and businessman Tom Steyer support building on the Affordable Care Act with a new public option.

Warren defended her support for a single-payer system, saying that “on day one as president I will bring down the cost of prescription drugs,” specifically mentioning such medications as insulin and epinephrine injection pens.

Sanders called the current health care system “cruel” and “dysfunctional” and pointed out that Americans pay 10 times as much for some prescription drugs as people who live in Canada and other countries. “Medicare for All, that means no deductibles, no copayments, no out-of-pocket expenses. That's where we've got to go,” he said.

Klobuchar said that America is “way behind the curve when it comes to providing paid family leave and child care,” and her proposal is to provide that benefit for three months. Sen. Kamala Harris of California supports six months of paid family leave. Harris said the burden on women is especially great because they are having children in their 30s and even 40s. Sometimes, she said, that means women are raising their children at the same time that they are taking care of their parents. Six months’ paid leave “is meant to adjust to the reality of women's lives today,” Harris said.