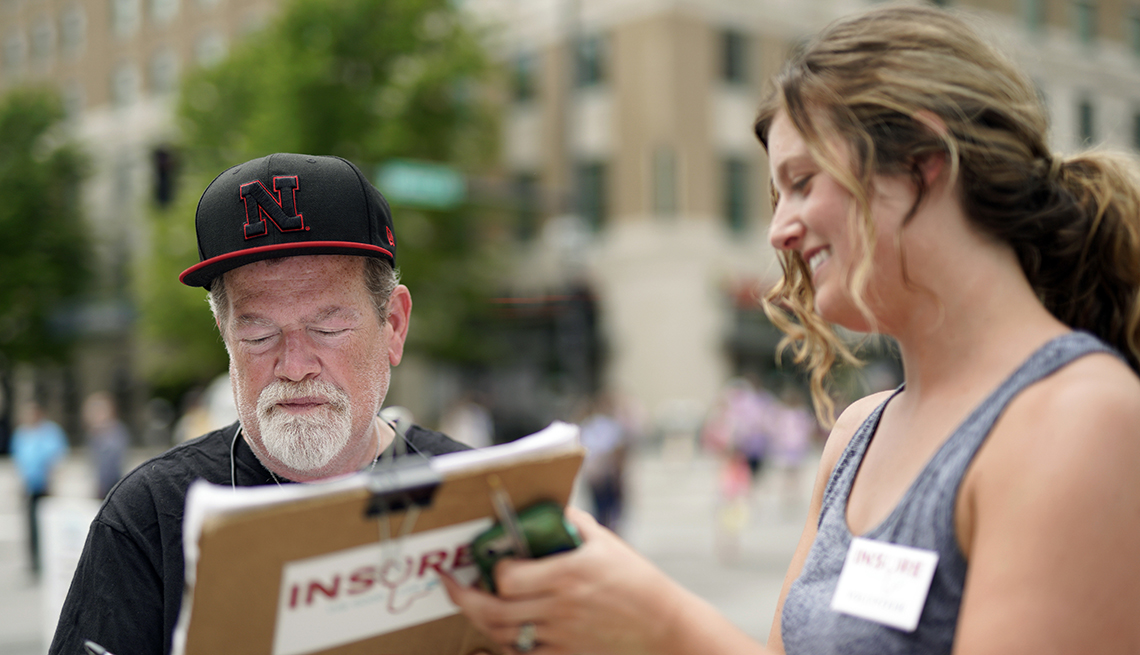 A man in Nebraska signs a petition to put the expansion of Medicaid on the state's November ballot.

En español | In states from California to Maryland, citizens going to the polls in November will use ballot measures to weigh in on such issues as expanding Medicaid, legalizing medical marijuana and reforming the rules governing voting. Ballot initiatives are the most direct way Americans can tell their elected leaders what they want them to do and also can help shape national policy.

Not all Americans can initiate ballot measures. According to the National Conference of State Legislatures (NCSL), 26 states allow citizen-generated questions. But legislatures in every state have the power to put an initiative up for a vote.

Under the Affordable Care Act (ACA), states can decide whether to make more people eligible for Medicaid, the federal-state medical insurance program for low-income and disabled Americans. Seventeen states have not expanded the program.

This fall, Medicaid expansion will be on the ballot in Utah and Idaho, and voters in Montana will decide whether to increase its tobacco tax to fund a continuation of that state’s Medicaid expansion beyond 2019, when it is set to expire. In Nebraska, supporters of expanding Medicaid have submitted enough signatures, but the secretary of state has until Sept. 14 to certify that ballot measure.

“Marijuana is a perfect example of public opinion changing law,” says Patrick Potyondy, a legislative policy specialist at the NCSL. “Elected politicians are probably not going to touch that with a 30-foot pole, but through a ballot initiative folks are able to start getting the law changed.”

A number of states will be voting on election-related measures, including a photo ID requirement for voting in Arkansas, same-day voter registration in Maryland, the restoration of voting rights for convicted felons in Florida and a measure in Louisiana that would bar felons from running for office for five years after they have served their sentence.

A measure in North Dakota would ban foreign political contributions, and an initiative in South Dakota would prohibit out-of-state contributions to ballot question committees. The secretary of state in Arizona is still reviewing a measure that would give Arizonans the right to know the source of campaign contributions.

Voters in Michigan, Utah and Colorado will decide whether to create independent commissions to redraw state and possibly congressional district boundaries. Supporters say they want to remove politics from redistricting as much as possible. In 13 states, independent commissions have the primary responsibility for drawing district lines, and 10 states have advisory or backup redistricting groups.

States require registered voters to sign petitions to get a measure on the ballot. The number of signatures needed varies from state to state but can run into the hundreds of thousands. In Idaho, 147,280 voters had to sign to get Medicaid expansion on the ballot this November. The campaigns for controversial ballot measures can cost millions of dollars. Ballotpedia says $107.8 million was spent on initiative campaigns nationwide in 2017, including more than $3 million on Maine’s Medicaid expansion measure.

“We’re continuing to see people use ballot measures as a tool to make changes in their communities — from the economy to the environment and education, criminal justice and our democracy,” says Chris Melody Fields Figueredo, executive director of the Ballot Initiative Strategy Center.

Where to get help

Learning about the ballot initiatives in your state can take some work. Potyondy suggests going to the website of your state’s secretary of state, where you should be able to find links to plain English descriptions of ballot measures, rather than waiting for the legal gobbledygook you might see at the polls. Many states ask nonpartisan groups, including AARP, to write consumer-friendly, objective descriptions of ballot measures and also give supporters and opponents the opportunity to write pro and con statements.

“A lot of these initiatives will directly affect people’s lives,” says Kristin Keckeisen, an AARP campaign director. “Voting for your federal, local and state candidates is important, and ballot initiatives are, too. We urge people to take time to learn more about them and to vote.”