Obama proposed no changes to the Social Security and Medicare eligibility ages. He did offer $248 billion in Medicare cuts, including new costs for future beneficiaries, and $72 billion from Medicaid. 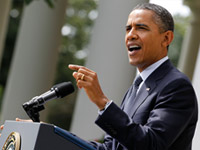 President Obama speaks from the Rose Garden about his deficit-cutting plan.

"We came out of this much better than we thought we would even a few weeks ago," said Max Richtman, head of the National Committee to Preserve Social Security and Medicare. "On balance, it's a very good plan."

Republicans immediately assailed his tax hikes on the wealthy as a threat to the economy and criticized him for not seriously tackling expensive entitlement programs.

"Pitting one group of Americans against another is not leadership," said House Speaker John Boehner, R-Ohio. "This administration's insistence on raising taxes on job creators and its reluctance to take the steps necessary to strengthen our entitlement programs are the reasons the president and I were not able to reach an agreement previously, and it is evident today that these barriers remain."

Obama said his plan "is not class warfare. It's math."

How would you cut the budget deficit? Do

Medicare, Medicaid on the table. Read

Washington’s 2011 fiscal wars: What they mean to you. Read

Join the fight to keep Social Security, Medicare strong. Do

"Either we ask the wealthiest Americans to pay their fair share in taxes, or we're going to have to ask seniors to pay more for Medicare. We can't afford to do both," Obama said in a Rose Garden speech.

The Obama package would cut $3 trillion of deficit spending over the next 10 years if it passed — a tall order given GOP objections. But a bipartisan congressional committee is working on cutting federal spending, and if it can't win final approval for at least $1.2 trillion in cuts before the end of the year, automatic spending cuts will kick in.

Not long ago, the president had offered major cuts in entitlement spending as he tried to win a deficit reduction deal with congressional Republicans and signaled he could support raising the Medicare normal retirement age to 67.

But the latest plan makes no change to Social Security. The vast majority of the $248 billion in Medicare cuts he proposed would come from reducing overpayments, according to the White House. Any changes that affect beneficiaries would not kick in until after 2017.

Next: The major changes to Medicare. >>

Some of the major Medicare changes would include:

Robert Moffit, senior fellow at the Heritage Foundation, called the president's plan a major disappointment. "This is not going to change the basic trajectory of the Medicare problem," he said of the $36.8 trillion shortfall in funding over the next 75 years.

Raising the Medicare retirement age to 67 was one of the "few precious areas" where both parties agreed. "It's long overdue" because life expectancy has increased by eight years since Medicare began, Moffit said. Obama's decision to back away from the idea because of political pressure is a disappointment, he said.

Richtman and Ed Coyle, head of the Alliance for Retired Americans, though, celebrated the decision to leave the Medicare retirement age unchanged and not cut Social Security.

"It is particularly important that, as we make key investments in our future, we continue to honor our nation's 76-year commitment to Social Security," Coyle said. "Social Security is a truly great American success story, keeping generations out of poverty. We are no longer a nation where you work until you die."

Richtman said the new costs for Medicare patients are worrisome.

"We're seeing so many seniors living off their Social Security check or just a little bit more. They're not able to pay more" for health costs he said, especially after not getting a cost-of-living increase for two years.

Obama's plan is likely to face fierce opposition from the Republican-controlled House because of its reliance on tax increases. He would let Bush-era tax breaks for families earning more than $250,000 lapse — an idea Republicans have repeatedly rejected but one that would save $866 billion. Those same families also would be limited in their deductions and exclusions, which could raise their taxes and would save the treasury $410 billion. Obama also proposed a guiding principle named after Warren Buffett that millionaires should not pay lower tax rates than middle-class workers.

But Republicans say the Obama plan would stifle the economy by levying higher taxes on job creators.

"Unfortunately, none of the president's proposals this year — from his February budget to his April budget speech, to his recommendations today — offers a credible plan to lift our crushing burden of debt while restoring economic growth," said House Budget Chairman Paul Ryan, R-Wis. "Instead of renewed prosperity, the president has offered us a plan for shared scarcity. The nation deserves better."

Obama took a challenging tone in drawing a line in the budget sand over taxes and Medicare.

"I will veto any bill that changes benefits for those who rely on Medicare but does not raise serious revenues by asking the wealthiest Americans or biggest corporations to pay their fair share. We are not going to have a one-sided deal that hurts the folks who are most vulnerable."