En Español| While the issues of job creation and employment are dominating the 2012 presidential campaign, not-yet-retired boomer voters are far more concerned about other economic issues, a new AARP survey reveals. And they're upset that candidates aren't paying more attention to those issues.

See also: What happiness and well-being mean to older Americans. 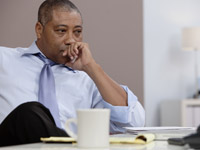 The AARP survey uses these five factors to compile a unique new feature among election-year polls: an "Anxiety Index." Non-retired boomer voters, defined as non-retired 50- to 64-year-olds by the pollsters, scored 70 percent on the Anxiety Index, significantly higher than both the 59 percent scored by 18- to 49-year-olds and the 46 percent scored by those 65 and older.

The results belie a common stereotype of boomers as "comfortable and living high on the hog compared to everyone else," says pollster Greg Strimple of GS Strategy Group, which along with Hart Research Associates helped conduct the survey for AARP. "You see these numbers, and they're anything but. In fact, it's surprising to see that 50- to 64-year-olds are the most politically and economically anxious voters."

The survey, which questioned 1,852 registered voters, including 1,331 ages 50 and older, found the major driver of economic anxiety to be fear about retirement prospects:

What the economy means to voters 50-plus [PDF]

What the economy means to African American voters 50-plus [PDF]

What the economy means to Hispanics voters 50-plus [PDF]

What the economy means to Colorado voters 50-plus [PDF]

What the economy means to Florida voters 50-plus [PDF]

What the economy means to Nevada voters 50-plus [PDF]

What the economy means to Ohio voters 50-plus [PDF]

What the economy means to Virginia voters 50-plus [PDF]

What the economy means to Wisconsin voters 50-plus [PDF]

The survey, which questioned 1,852 registered voters, including 1,331 ages 50 and older, found the major driver of economic anxiety to be fear about retirement prospects:

Next: 6 of 10 boomers fear coming up short in later years. »

"While the issue of jobs is very important to age 50-plus voters, any meaningful discussion of the economy and this year's election has to include the future of Social Security and Medicare," says Nancy LeaMond, AARP executive vice president. "For these voters, 'retirement security' and 'economic security' are largely the same thing."

Only 32 percent of non-retired boomers worry about being able to find full-time employment with benefits, the survey found, despite an economy that has been struggling to create new jobs. They may not be as concerned about job prospects as other voters because the unemployment for their age group is 6.4 percent, roughly two percentage points below the national average, according to the Bureau of Labor Statistics.

But the economic downturn has taken a toll on their investments and the value of their homes — a major component of boomers' personal wealth. Six of 10 said they're worried about coming up short in their later years, the survey found.

The poll results show that "people in this age group are facing a difficult transition, and they're worried about whether they can do it," says Jacquelyn James of the Sloan Center on Aging & Work at Boston College. "Most people had planned for a three-legged stool that would give them a happy, healthy retirement: a pension, their own savings and Social Security and Medicare.

"But over the past 15 years, pensions have been disappearing, and their investments have been hit hard by the downturn. Now, they're worrying that politicians are not going to continue to support the entitlement programs. That's why some are feeling that they need to add a fourth leg to the stool: continuing to work."

Something that could be ominous for incumbents in both political parties is the fact that boomers place a lot of the blame for their financial fears on Washington. The AARP survey shows that 82 percent believe political gridlock has damaged their economic prospects to some degree (47 percent think it's harmed their prospects a great deal). Seeing both Social Security and Medicare as crucial to their financial security, working boomers agree that the next president and Congress need to work together to protect both programs.

"We're seeing that across the board — among Democrats, Republicans and independents," pollster Strimple says. "They're all increasingly reliant on Social Security. It's not a partisan issue. Everyone wants these programs to be preserved."

The survey found all 50-plus voters evenly divided on the presidential preference — 45 percent for President Obama, 45 percent for Mitt Romney and 10 percent undecided. And the poll shows widespread discontent that the presidential candidates aren't talking more specifically about what they'll actually do to strengthen Social Security and Medicare. Roughly two-thirds think the candidates have not done a good job of explaining their plans for either program.

"The lesson for both candidates is that, while jobs and employment remains a pressing issue, voters over 50 are focused even more on the challenge of finding a secure retirement," says pollster Guy Molyneux of Hart Research Associates. "Neither candidate is addressing this issue in a satisfactory way, and the one who does could reap significant political benefits."

You may also like: Voter ID laws: Discretion or discrimination?