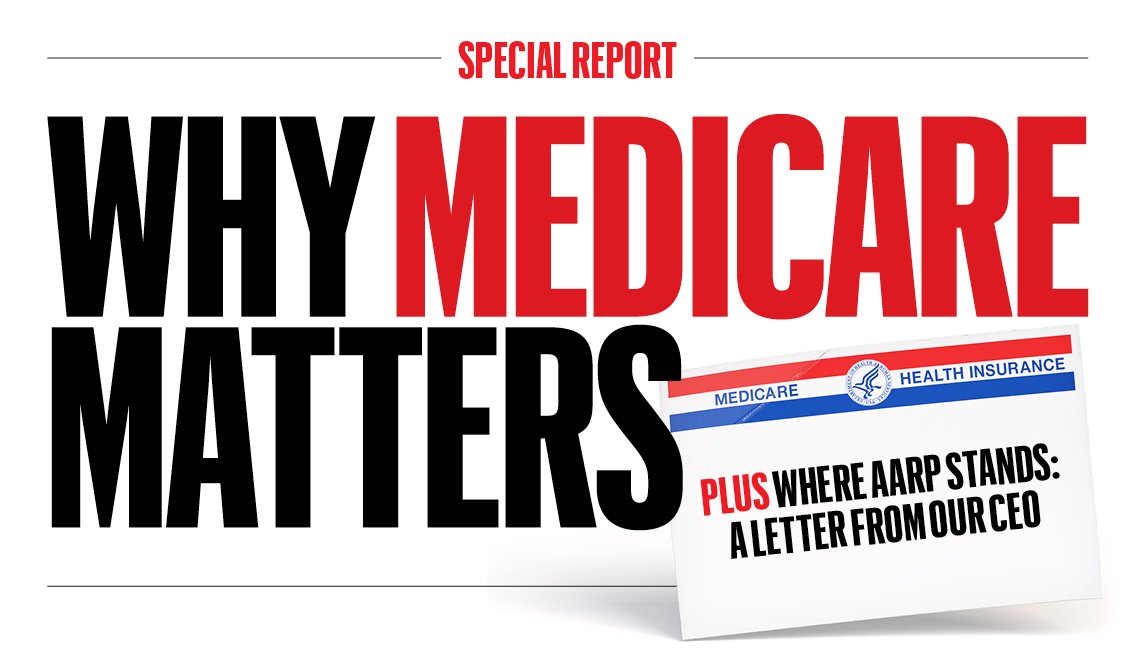 En español | MEDICARE WORKS WONDERS for millions of American families, providing affordable access to today’s most advanced health care. Poll after poll invariably confirms its popularity. But will Medicare continue to work for us and for the next generations? That’s the question that Congress and the Trump administration will be asking in the coming months.

At AARP, we continue to believe passionately in this program, which has allowed our citizens to age with dignity. In this special report, we detail what the state of Medicare is today and provide what you need to know about the upcoming debate in Washington over the nation’s most important health care program.  — Robert Love, AARP Bulletin editor in chief

As Donald Trump was mounting his insurgent candidacy for president, he repeatedly set himself apart from the Republican field by vowing to protect the Social Security and Medicare Americans have come to know.

He assured older voters, who proved to be a decisive voting bloc, that those programs would remain intact and the benefits delivered as promised.

Yet within days of Trump’s historic election, the guaranteed health coverage provided by Medicare was cast in doubt. House Speaker Paul Ryan (R-Wis.) revived his plan to replace it with a fixed-dollar subsidy that beneficiaries would use to buy private health insurance. Meanwhile, Congress is expected to move quickly to repeal the Affordable Care Act (ACA), which could have the effect of erasing the consumer-friendly Medicare benefits that the law created.

As news of Ryan’s proposed Medicare overhaul spread, it stirred fears among the 57 million beneficiaries who rely on it to cover prescription drugs, doctor visits and hospitalizations. Democrats lined up to pledge their opposition. It also prompted an outcry from consumer groups, including AARP.

What remains to be seen in January, as Congress reconvenes and the president-elect takes office, is how Trump’s campaign assurances to protect Medicare will hold up against House lawmakers intent on revamping the popular health program.

Trump contributed to the uncertainty by announcing House Budget Committee Chairman Tom Price (R-Ga.) as his pick to run the Department of Health and Human Services. Price has been an advocate of Ryan’s Medicare approach, which supporters call “premium support” and critics decry as a “voucher system.” Trump’s website further raised questions about his plans for Medicare. It says he wants to “modernize Medicare,” which is often seen as Washington code for the type of changes Ryan wishes to make.

Since the election, Trump has not made any comments about Medicare. But in an interview with ABC News on Dec. 4, Vice President-elect Mike Pence said Trump “made it very clear in the course of the campaign that we’re going to keep our promises in Social Security and Medicare.”

Ryan’s Medicare overhaul, a version of which passed the GOP-controlled House, would fundamentally change how Medicare works.

Since its creation in 1965, Medicare has been a “defined benefit” program, guaranteeing a certain level of health coverage. It now pays about 80 percent of costs associated with doctor and hospital visits. Beneficiaries are responsible for paying monthly premiums, copayments and annual deductibles.

Ryan would convert Medicare from a “defined benefit” to a “defined contribution” program. Instead of a guaranteed level of coverage, a dollar amount would be set for Medicare beneficiaries to pay premiums on insurance they would buy from private-sector companies (this is why Ryan calls it “premium support”). Ryan’s plan would also increase the eligibility age from 65 to 67.

A former chairman of the House Budget Committee, Ryan wants to limit how much the government spends on Medicare. In 2015, Medicare accounted for 15 percent of the federal budget, a proportion expected to grow as the number of beneficiaries rises.

“The reforms we’re talking about do not affect the benefits for anyone in or near retirement,” Ryan said last month. “But for those of us in the younger generations, it won’t be there for us if we stay on the current path.”

Consumer advocates also want to address growing costs in the health care system, including Medicare. But they contend that Ryan’s approach would erode much-needed coverage and shift costs to many who live on fixed incomes and continue to struggle in the shadow of the Great Recession.

While Ryan says the annual subsidy would be greater for low-income people, critics say it is unlikely to keep pace with the rising costs of insurance. The result, they say, is that beneficiaries would shoulder more of the financial burden — or go without needed medical care. Although Ryan also says people would be allowed to stay in traditional Medicare, critics argue his approach is designed to gradually increase out-of-pocket costs in the program and nudge beneficiaries into private plans with no guaranteed level of coverage.

Opponents also say that there are better cost-saving options available. One of the most popular is giving Medicare the authority to negotiate prescription drug prices directly with drug companies. The change would help the federal government control a cost that accounts for $1 out of every $6 Medicare spends. That idea was supported by more than 80 percent of people in a Kaiser Family Foundation poll in 2015. As a candidate, Trump also embraced the idea, another potential point of friction with House Republicans, who generally oppose it, as does the pharmaceutical industry.

The Impact of Obamacare Repeal

What Trump and GOP leaders wholeheartedly agree on is that the first order of business will be repealing the Affordable Care Act, also known as Obamacare. Republican congressional leaders want a repeal vote in January so that a bill can be on the president’s desk right after he is sworn in.

77 percent of people say Medicare is a “very important” program

Although it has received little attention, a full repeal of Obamacare would eliminate Medicare benefits created by the law. Among other things, it improved Medicare’s financial outlook by slowing the growth of spending and clamped down on fraud, waste and excessive payments. It also enabled tens of millions of Medicare beneficiaries to get free preventive services such as flu shots and screenings for cancer and diabetes. And between 2010 and 2015, nearly 11 million Medicare beneficiaries saved $20.8 billion on prescription drugs—an average of $1,945 per person — because of the gradual closing of the coverage gap known as the doughnut hole.

While Obamacare remains controversial — in part because of its mandate to purchase health insurance and because premiums have increased for some plans—the Medicare provisions have proved popular with beneficiaries.

Even in an era of hostility toward the federal government, support for some programs has remained strong. A Kaiser poll found that 77 percent of people say Medicare is a “very important” program, just below the level of support for Social Security at 83 percent.

Trump’s campaign assurances about protecting Medicare and Social Security undoubtedly played a role in his Election Day victory, especially among older voters. Those 65 and older supported him with 53 percent of the vote, compared with 45 percent for Democrat Hillary Clinton, according to the Pew Research Center. There will be a lot at stake for them when Congress reconvenes.