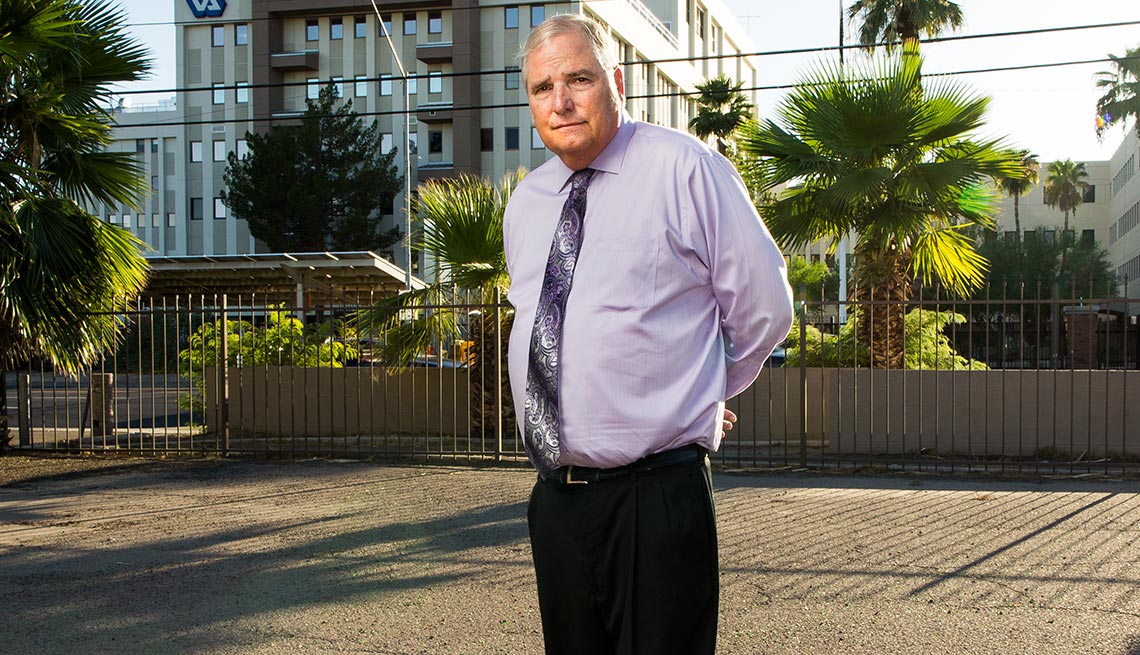 VA whistleblower Sam Foote sleeps better knowing he did something about the system that was killing the veterans it was supposed to heal.

Sam Foote tinkered with Erector sets and electronics as a boy, and studied physics and calculus in college, planning to become an aerospace engineer like his father, who built satellite radar guidance systems. But his father warned that, with man already on the moon, interest and funding for space programs would wane. Instead, Foote chose internal medicine and trained in the late 1970s.

"As an internist you're a puzzle solver," he says. "I like to think of myself as a human engineer. I troubleshoot human systems."

He worked for nearly a quarter-century for the Veterans Affairs health care system in Phoenix. In recent years, he and his colleagues had struggled to meet rising demand, but a deeper problem emerged: too many veterans not getting the care they needed. Last year Foote examined the Phoenix VA health care system as he might a patient, and he arrived at a troubling diagnosis: The system itself was sick, and was killing veterans it was supposed to heal. He wrote letters to the VA Office of the Inspector General charging that Phoenix-area veterans had died waiting months for care, hidden on secret waiting lists. Then he reached out to the media.

Foote couldn't have imagined the fallout. Whistleblowers at VA facilities around the country alleged similar wrongdoing, and the inspector general launched dozens of investigations, which found the same problems nationwide: 57,000 veterans had been waiting more than three months for an initial appointment, and another 64,000 veterans had requested an appointment over the past decade but weren't on the wait list. They had either fallen through the cracks or been kept on secret lists to make the facilities appear more efficient.

The crisis in veterans' health care hit older Americans hard. Of the nation's 22 million veterans — whose average age is 62 — more than a quarter use VA facilities for some or all of their health care. As of 2011, even after nearly a decade of war in Iraq and Afghanistan, veterans 45 years and older accounted for 86 percent of those enrolled in VA health care.

With the scandal in full boil, retired Gen. Eric Shinseki resigned as the secretary of Veterans Affairs, and President Barack Obama nominated former Procter & Gamble CEO Bob McDonald, a West Point graduate, to replace him and clean up the enormous bureaucracy, which has more than 300,000 full-time employees. Congress enacted some stopgap measures and approved the hiring of more doctors and nurses. The scandal has also sparked a broader discussion about how the country should care for its veterans, in a time of soaring health care costs and with a new generation of veterans wounded in Iraq and Afghanistan.

Now 61 and a few months into his retirement, Foote sits on a living room couch reading another story about the VA crisis in his morning paper. A nearby shelf is crowded with family pictures. The home, where he's lived for nearly three decades, is an adobe-style ranch just outside Phoenix. In recent years, Foote had been looking forward to retirement. So far, as the man whose accusations led to so much turmoil, he hasn't found much relaxation. "It hasn't been your average take-it-easy, carefree retirement," he says.

Foote says health concerns, including lingering asthma problems, and retaliation from the VA forced his retirement a year earlier than he'd hoped. But being near retirement age also made it easier for him to be a whistleblower. "It's a huge risk," Foote says. "I was one of the few people who knew enough about it, and if they retaliated I could retire a little early." He had started at the Phoenix VA in the early 1980s, fresh from medical school. After a brief sojourn in private practice, he returned to the VA in 1990.

JoinAARP Today — Savings, resources and news for your well-being

Foote saw a growing demand for services, a harbinger of today's problems. In the 1990s, as the population of World War II veterans shrank, the VA opened eligibility for health care to more veterans. Between 1997 and 2001, the number of veterans using VA health care services jumped 40 percent, to 3.7 million. The wars in Afghanistan and Iraq brought more patients into the overburdened system.

The recession beginning in 2007 led to another surge in patients. "Whenever the economy tanks, more people go to the VA," Foote says. "People would come in and say, 'This is the first time I've used my benefits because I was on my wife's insurance' or 'I had my own insurance and I lost my job.' "

Between 2002 and 2012, the number of VA health care enrollees climbed nationwide by a third, to 9 million. Outpatient visits to VA facilities nearly doubled to 83 million per year. In the last three years alone, primary care visits shot up 50 percent, but the number of primary care providers like Foote grew only by 9 percent. With demand outpacing resources, veterans waited longer for care.

Foote recalls a meeting in 2012 to discuss strategies for meeting a crisis in demand for services for which there seemed to be no answer. "But they came up with one: Fake the numbers. Simple. That was the solution."

Long wait times were nothing new at the VA. Since 2005, the inspector general had issued 18 reports documenting delays in care nationwide. In 2011 the VA had set a goal that patients should be seen within 14 days of requesting an appointment. Phoenix and many other VA facilities found an easy way around this. Say a veteran requested an appointment and the first available slot was five months away, Foote explains. If the veteran agreed to that time — even though he had wanted care much sooner — a VA scheduler could mark the wait time as zero days.

But Foote uncovered a more devious tactic for making wait times disappear: secret, off-the-books lists. "No one was allowed to make new patient appointments in the computer," Foote says. Instead, appointment requests were kept on separate, unofficial lists until an opening drew close, when they were moved onto the official list, giving the illusion of efficiency.

Foote knew of other tricks. "Let's say you have 10 patients you see a day in your clinic. You want to have an easy day? Have your staff make appointments for people who are dead," he said. Doctors and staff also might call a patient the night before an appointment, tell him he needed to bring additional paperwork, and reschedule his appointment for three weeks later. Foote and a colleague eventually gathered the names of patients waiting for care and turned the names over to the inspector general. Only when scheduling clerks called the patients to make an appointment did they learn that many had been waiting months for an appointment — and some had died.

Foote was familiar with the VA's Office of Inspector General, a resource for employees who suspect wrongdoing within the organization. In 2011, he had written a letter alleging financial mismanagement within the Phoenix VA health care system. A subsequent investigation confirmed the allegations. To learn more about the long wait times, he turned in the spring of 2013 to the employees who had helped him understand the scope of the earlier financial problems. "I'd been there 23 years. I had a good reputation of problem solving. We started looking into everything, asking questions," he says.

In June 2013, while reviewing new-patient appointments as an outpatient clinic director, Foote's staff found two veterans in dire need of care. One had gone to the emergency room with chest pains that January, after waiting several months for care. An EKG showed heart damage, which should have made him a priority for follow-up care, but he was given an appointment for October. Foote found the man's heart damage had worsened and sent him for urgent bypass surgery. The other veteran, a diabetic, had gone to the emergency room in March with dangerously high blood sugar and had also been given a follow-up appointment for October before Foote intervened.

Those patients lived. But in the late summer of 2013, Foote heard that others had died. He also learned that thousands of veterans in the system did not have primary care providers, meaning they, too, had long wait times or had been forgotten. He wrote a letter to the inspector general last fall detailing the wait-list scheme and charging that several veterans died awaiting care. The IG sent a team to Phoenix in December to investigate, but Foote heard little. He sent another letter in March. "Patients are still dying," he wrote.

Rep. Jeff Miller (R-Fla.), chairman of the House Committee on Veterans' Affairs, praised the actions of Foote and others who spoke out. "At great risk to themselves and their families, whistleblowers dare to speak truth to power," Miller said.

But a long-term fix won't be easy, Foote says. "Providers aren't available. That's the side of the equation no one understands," he says. "It's going to be scarce for everybody.

"The VA has got to decide, either we go back to what our mission used to be — chronic care for combat veterans, and maybe a safety net for low-income veterans — or do we fix what's wrong with the system," Foote says. "But how much effort, how much money can you put to it?"

Despite all the trauma of the past year, Foote would do it again. "I certainly sleep better at night knowing I've done all I can do," he says. "The biggest regret is throwing rocks at an institution I worked at for so long. But I didn't think there was any other way."

Brian Mockenhaupt is a former Army infantryman who served two tours in Iraq.