Hear Ye! Hear Ye! explores a real court case. Read about it below and decide how you would rule. Then read the actual verdict and let us know if you agree.

In the summer of 1996, Floretta Sutton and Ben Logan married in Atlantic City, N.J., where Ben had spent the past 19 years as pastor of Grace Cathedral Baptist Church. Floretta was 66 years old, and Ben was 56. Both were widowed and had grown children.

In 2004, Ben retired from his church and accepted an offer to assist a friend who served as a minister in Newport News, Va. Ben received a periodic stipend, but no salary. The couple moved to Virginia, and bought a house near the church. Counting their house in New Jersey, they owned two homes with both their names on the title. In addition, Floretta owned two houses in her name, and Ben owned one house in his name, all three of which they rented out.

In January 2007, Ben and Floretta traveled to Atlantic City to work on their rental properties. During this visit, Floretta met with an attorney who prepared a power of attorney and an advance directive for her medical care in case she became incapable of making her own decisions. She took her daughter Karen with her to the meeting. Floretta named Karen her guardian and designated her daughter to make medical decisions on Floretta’s behalf should she become incapacitated.

Ben knew nothing about Floretta’s trip to the attorney with Karen, and Floretta did not tell him about the documents she signed.

Four months later, Floretta and Ben returned to New Jersey to attend Floretta’s granddaughter’s college graduation. While there, Floretta sought a second opinion about a cyst in her eye and learned she had cancer. Ben returned to Virginia, but Floretta stayed with Karen and started treatment.

On June 26, 2007, Floretta suffered a stroke, leaving her legally incapacitated, and was moved to a nursing facility. Karen took charge of Floretta’s care, making medical decisions for her and taking control of her finances and property.

Ben sued to be appointed Floretta’s guardian, arguing that New Jersey law gives preference to a spouse when appointing a guardian. He said that Karen took control of Floretta’s individual and jointly owned property, and denied him input in medical and financial decisions. He argued he was capable of aiding Floretta’s medical and daily needs because he had cared for his first wife, who had multiple sclerosis. Although living in Virginia, Ben said he traveled to New Jersey each month to be with Floretta, staying about three weeks each time he went.

Ben argued that Karen only discussed Floretta’s medical needs with him “after she’s already made the decision” and had denied him copies of hospital papers. He also said that Karen refused to consider another facility for Floretta’s care, even though Ben felt she was not being cared for properly.

Ben told the court that Karen influenced Floretta to execute the power of attorney and medical directive, despite the fact that he and Floretta had mostly maintained their finances together. Ben’s son-in-law testified that when the couple stayed at his house for a month, Ben made Floretta breakfast each morning, reminded her to take her pills, and always held her hand.

A daughter has her say

At the hearing, Karen testified that she was most suited to look after Floretta’s best interests. Karen’s late husband had also suffered from cancer and a stroke, and she was comfortable taking care of her mother’s physical needs. Karen also argued that she did not have a financial motive for seeking guardianship, but Ben did because Karen had to use all of Floretta’s income to pay for nursing home care.

Floretta’s other daughter and her sister testified that Floretta and Karen were close, and that Karen had helped her mother with her finances long before Floretta married Ben.

How would you decide? Who should be Floretta’s guardian? 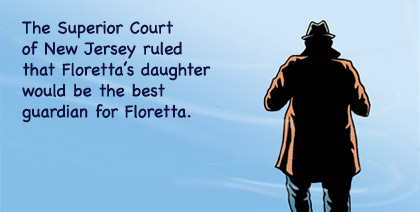 The Superior Court of New Jersey ruled that Karen would be the best guardian for Floretta. Ben appealed to the Appellate Division.

First, the court considered whether Ben should have preference as guardian because he was married to Floretta. While family members have preference, the court held, the law allows “the trial court the discretion to appoint a guardian in the best interests of the incapacitated person. The statute does not mandate that the first choice when appointing a guardian must be the incapacitated person’s spouse.”

The court also said that Floretta was competent when she executed her powers of attorney and medical directive and it looked at her relationship with her daughter. Karen had been helping Floretta with her finances since the death of Floretta’s first husband, and she was named on her mother’s bank accounts. Floretta’s Social Security and pension receipts were deposited into a joint account Karen managed. The court noted that Floretta chose to hire a New Jersey attorney­—not one in Virginia, where she had lived with Ben—in case she was incapacitated, and chose not to advise Ben of her decision to appoint Karen. The court concluded that Floretta’s relationship with her daughter showed she was not unduly influenced, as Ben had argued.

The court ruled that appointing Karen as her guardian was in Floretta’s best interests.

Robin Gerber is a lawyer and the author of  Barbie and Ruth: The Story of the World’s Most Famous Doll and the Woman Who Created Her.