As a grandmother of nine, New York Times best-selling author Iyanla Vanzant knows the role of a doting grandmother.

"I touch them, kiss them, cuddle them. They hate it, and I do it anyway," says the 58-year-old ordained minister and spiritual life coach. 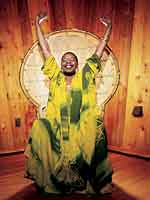 She savors every moment of it, too — grateful to be sane and still a part of their lives, she says, after an epic rise and fall.

Ever the prolific writer, Vanzant has captured her journey from fame and fortune to obscurity and loss, and her will to survive it all, in her latest of nearly a dozen books, Peace From Broken Pieces: How to Get Through What You're Going Through.

It was a story that took her several years to write.

"It wasn't that I wasn't ready to tell it, but I struggled with how to tell it. How could I tell the story to honor me and everyone involved?" Vanzant wondered. "We all have a story and all want to share that story in a way just to relieve ourselves of the trauma and other ties. We can share victory on the other end."

One thing after another

Vanzant's name may be familiar to many. In 1998 she became a regular contributor to The Oprah Winfrey Show before crafting her own syndicated daytime TV talk show Iyanla. It seemed with her Oprah connections, book sales in the millions, popularity on the speaker circuit and her own spiritual center — the Inner Visions Institute for Spiritual Development — she was living what she wanted others to be: an overcomer.

But after just six months, Iyanla was canceled. Around the same time, Vanzant's eldest daughter, Gemmia, was diagnosed with cancer. She died on Christmas morning 2003. Vanzant's marriage to a man with whom she had had an on-and-off relationship for 40 years began to unravel. Finally, in the turbulence of the mortgage crisis, she lost her home, unable to pay off the balloon mortgage that was due.

"As a spiritual technician, I was able to support millions of people, but I watched my daughter battle a vicious disease and there was nothing I could do," Vanzant recalls. "That raised issues for me. It was a major test of faith in God, myself and my work."

Gemmia's death was specifically traumatic for Vanzant and even more so once she began to read her daughter's journals.

"I got a clear understanding of how she felt and saw me and experienced me," Vanzant says. "It was mind boggling. Her experience of me was very different than I thought it was."

Vanzant says what she thought was love — giving stability and provision — was not the emotion Gemmia experienced.

"Because I had become very successful, I wasn't aware that it was my brokenness that drove me to certain things until my daughter died and I could see it. Those things that she could observe, I thought were healed."

Vanzant says she began to do some family pathology — looking for destructive patterns and pitfalls. Through that process, she realized that her long relationship with her husband had its foundation in a time when she was a wounded and broken person. Her house, she says, was bought out of a need for security, something she didn't have growing up in Brooklyn when she was sometimes abandoned by her father and abused by other relatives.

In Peace From Broken Pieces, Vanzant finally comes to a tranquil place from the physical, emotional and financial losses of recent years. For her close friends, watching her upright her world has been an insight to healing.

"Anyone in that healing space is walking through valleys," according to Susan L. Taylor, editor-in-chief emeritus of Essence magazine, the first publication to detail Vanzant's hard-luck childhood and how she went on to become an attorney and worldwide motivational speaker.

"If her wisdom shielded her from being challenged in ways that most of us are, she wouldn't be able to help any of us," Taylor says. She marvels at how Vanzant was able to go through all that she has in recent years and still want to use those experiences to help people.

For Vanzant, it has been a rich learning experience. She's learned forgiveness, which brought her peace, she says.

"You make peace through forgiving. Forgive yourself and bless it. Be willing to let things go," Vanzant explains.

With a new book, speaking engagements and her work through her spiritual center, Vanzant is hoping to encourage many others — including her grandchildren — to do the same.